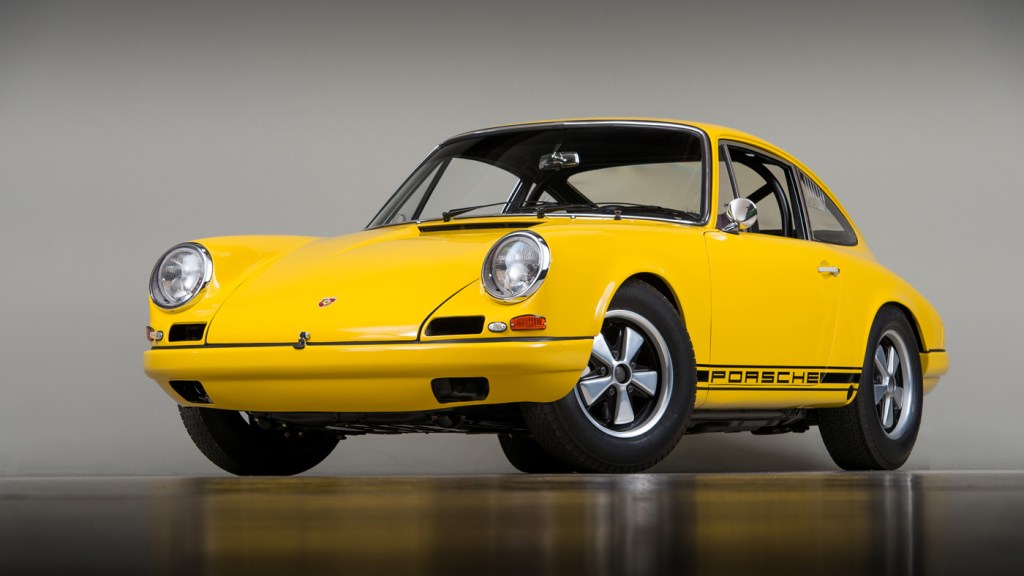 Officially launched in the fall of 1964, the Porsche 911 was a way to take the popular, but still young, German marque into a new automotive market. With a more powerful 6-cylinder engine and a rakish look, the successor to the 356 model promised buyers a more sporting experience and double takes on the boulevard.

Legendary 911 racing victories were still the stuff of Porsche’s dreams when, in 1967, the company’s engineers pulled four 911 S cars off the factory line and set about creating a lightweight prototype dubbed the R, for rennsport.

Call it the origin of the species, a machine that became the spiritual predecessor to countless 911-based cars that would claim victory at Le Mans, Sebring, and Daytona. Call it . . . for sale.

An example referred to as R4, the last of four R prototypes (20 production models would follow), is ready to drive into a new collection after being meticulously spruced up—but not over-restored—by Bruce Canepa and his team of experts at Canepa in Scotts Valley, Calif. While the price is available upon request, by way of guidance, Canepa notes that a few of the production 911 Rs have sold for almost $5 million each. Extrapolate out from there.

“It’s the ultimate 911,” says ex-Porsche racer and marque expert Canepa. “The R cars were the first of the production race cars and, as such, really tell the story of everything that Porsche has done since then. It started here. And I’ve never seen a pre-galvanizing car in this condition.”

After being stolen, this example was rediscovered in a warehouse in Marseilles in 1991.  Photo by Zach James Todd, provided courtesy of Canepa.

R4’s unusual history directly contributes to its rare, unmolested condition. After its first French owner missed a few car payments, the car was returned to the dealer in preparation for a 1970 auction. But then, R4 was stolen, only to be rediscovered in a warehouse in Marseilles in 1991. After a few decades in the care of a British owner, R4 found its way to a U.S. collector in 2006.

“Because it was stolen and hidden away, there was no moisture or oxidation to contend with,” says Canepa, whose team took the car down to its tub and refurbished every part. “There are no sins in this car anywhere. It tells its own original story.”

Porsche racer Patrick Long sampled R4 recently for an exhaustive review in the new Porsche enthusiast quarterly, 000. Although he’s driven almost every Porsche race car imaginable, this 1967 gem left him grasping for adjectives. “This car is emotional, it’s loud, it likes it rough,” Long commented. “Now I get it.”

Canepa, who has made a name for himself improving Porsche’s 1980s supercar, the 959, says R4 offers the Porsche experience perhaps at its most pure.

“The balance of power to weight to handling is just incredible,” he says. “It reminds you that minimal weight is the best combination—it defines what a real sports car is. I honestly don’t know if there is a better car from this era.”