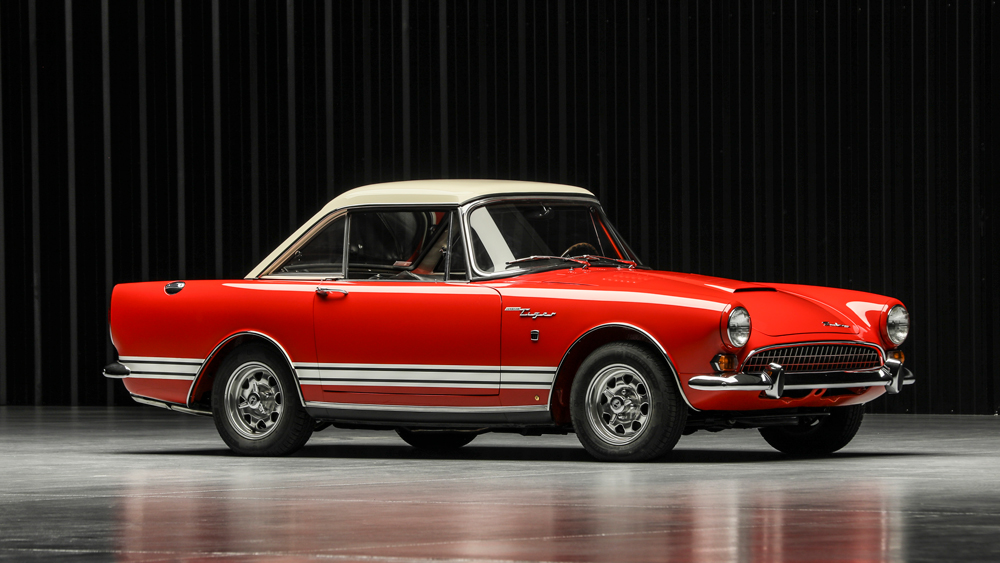 Those old enough to remember actor Don Adams’ TV sitcom character Maxwell Smart will recall that the bumbling spy drove a Sunbeam Tiger, a rare car when new in 1965 and one that’s even rarer now. The vehicle in the show Get Smart had a retractable machine gun under its hood and a few other essential spy accessories, but his red MK I roadster was otherwise similar to the 1967 Sunbeam Tiger Mk II that will chortle across the ramp at the Worldwide Auctioneers sale running April 22 through 23 in Auburn, Ind.

The Tiger has a fascinating history, although its life was short through no fault of its own. In 1962, Carroll Shelby officiated the unholy marriage between Britain’s AC roadster and Ford’s small-block V-8 engine, and the result was the Shelby AC Cobra. On the coattails of that car’s success in motorsport, Shelby and Sunbeam, a marque within the Rootes Group, set about to prototype a “baby Cobra,” shoehorning a Ford 260 ci V-8 under the hood of Sunbeam’s previously four-cylinder Alpine.

Development was quick, and the car was introduced at the 1964 New York Motor Show, the same year racing prototypes competed but failed to finish in the 24 Hours of Le Mans. Assembly of the Tiger was contracted to Jensen Motors, who just lost its contract to assemble the Volvo P1800 (another favorite TV-spy car). Altogether, 6,450 examples of the Sunbeam Tiger were made through 1967, when the model sang its brief swansong with a new model featuring Ford’s 289 ci V-8. Thus, the Tiger Mk II was born, living only long enough for 536 examples to be built, according to Tiger guru Norman Miller.

Essentially identical to its predecessor, the Mk II had a few distinguishing characteristics that included its 4.7-liter engine, a Ferrari-like eggcrate grille and bold side stripes above the rocker panels. And the Mk II developed about 200 hp in standard tune, 36 hp more than the Mk I. Despite carrying a capable lightweight engine, neither version of the Tiger had a high-strung disposition compared to the AC Cobra or Shelby’s Mustang.

The demise of the Tiger was yet another bungled chapter in British automotive history, the Rootes Group having been taken over by Chrysler in 1967. Mopar had no V-8 engine suitable for the tiny Tiger, which had barely an inch to spare within the cramped engine bay. Anyone who has fussed with the model knows that to replace the rear-most spark plug on the driver’s side of a US-spec car, the unfortunate mechanic must gain access through a plate on the interior firewall, or simply pull the engine.

Because the Sunbeam Alpine and Tiger are essentially identical, save for their engines and some unibody sheet metal beneath the exterior body panels, there exist many ham-fisted conversions as well as some quite deceptive clones. For this reason, documentation and impeccable provenance is essential when buying a Tiger. This car, serial No. 3 of Tiger Mk II production, is listed in The Book of Norman [Miller], the official registry recognized by serious Tiger enthusiasts. It also wears numerous original LAT (Los Angeles Tiger) options developed by Shelby, including its hardtop roof, polished wheels, hood scoop and two-inch exhaust.

Even the carpet and its jute backing are original.  Worldwide Auctioneers

Importantly, the car retains its original engine, carburetor, ignition, radiator and shroud, oil cooler and remote filter, brake servo, alternator, four-speed manual transmission and differential and even toolkit. During its 55-year life, it’s had four owners, the second of whom kept it stored for 30 years. Subsequently, its third owner commissioned noted Tiger expert Brad Jenkinson to perform a bare-metal restoration, refinishing the car in its original Carnival Red.

Impressively, even the carpet and its jute backing are original, as is every nut and bolt. The car has an admirable show history, taking first-place awards at Hilton Head, La Jolla Pinehurst and the Shelby of America National Meet. With that résumé, this red rocket is estimated to fetch as much as $180,000.