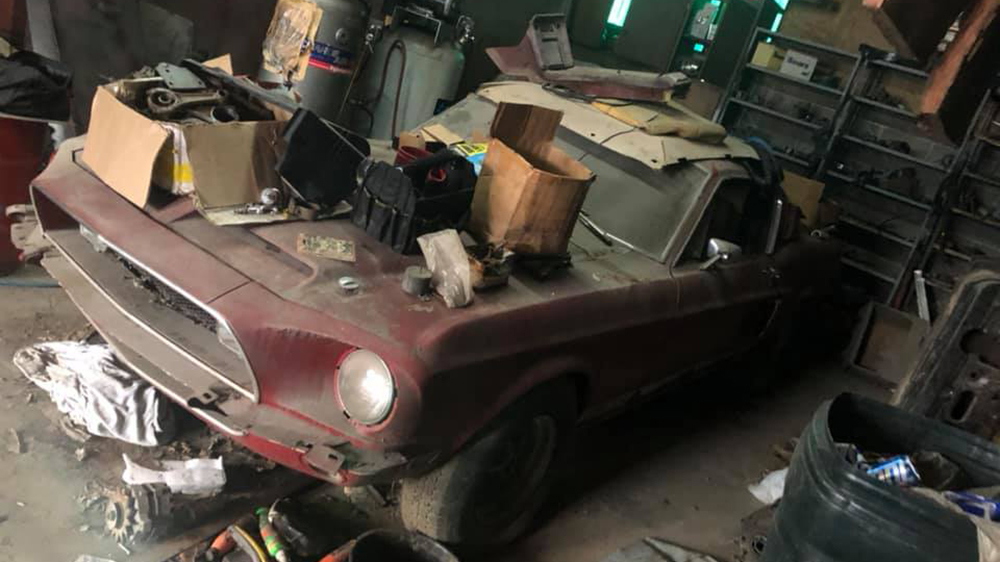 Has the mess in your garage gotten to the point where it’s starting to feel a little overwhelming? Well, a recent classic car find in Kentucky may be all the motivation you need to finally get to cleaning.

That’s because a Louisville, Kentucky man recently posted a rare 1968 Ford Mustang Shelby GT500 for sale that has spent the better part of the past 30 years buried beneath a load of junk in his garage, according to Barnfinds.com (via Road & Track). A “barn find” for the ages— especially for muscle car lovers—the forgotten bruiser is available for $70,000 on Facebook Marketplace, and that just might be a bargain.

The dilapidated ‘Stang is one of just 1,000 GT500s produced in 1968. This particularly example has been been owned by the same person for over 45 years, according to the listing. The owner claims the car has matching numbers and its original 428 cubic-inch V8 engine. Mated to a six-speed automatic transmission, the powerhouse was capable of churning out 360 horsepower back in the day. It’s also loaded with a slew of new parts, and, despite all the dust, the red body looks to be in relatively good shape.

Despite looking pretty decent for a 45-year-old car that hasn’t been touched in decades, the seller lists it as being in “poor” condition. The main reason for this appears to be the fact that the car hasn’t been driven in 30 years, so who knows how that original engine has held up. He also mentions “rust” damage and says the car “needs a lot of love.”

While $70,000 may seem like a lot for a car listed in “poor” condition, 1968 GT500s regularly sell for an average of over $100,000, according to Hagerty, with top-tier examples going for upwards of $160,000. Regardless of the rust damage or the work it needs, that could be well worth it for the right muscle car collector

“Barn finds” have been something of a treasure trove for collectors of late. In December, more than 30 vintage Jaguars, including several E-Types, were discovered in a greenhouse in England. And last summer, a wide-ranging collection of nearly 100 muscle cars that had been stored on a farm went up for auction in Iowa.