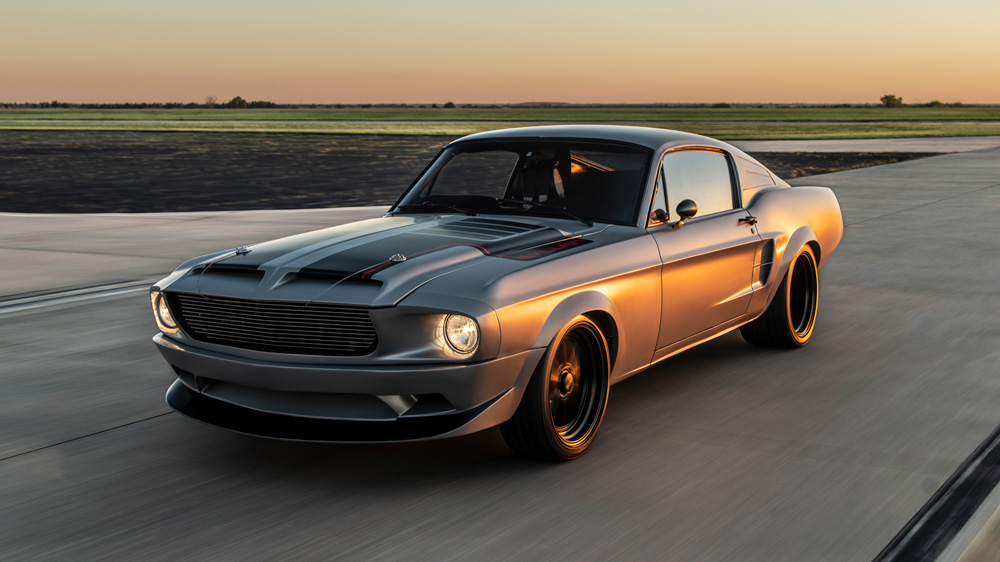 Ford’s engineers and marketing team likely knew they had a tasty recipe going when the company introduced its now iconic pony Car—the Mustang—back in 1964. The model was a hit with boulevard cruisers and hot-rodders alike, among them Carroll Shelby, who proceeded to transform the Detroit colt into a stallion in GT500 guise. The halo effect was intoxicating and meant ringing cash registers for Ford. While the rip-snorting Shelby Cobra and Ford GT40 race cars (both featured in Hollywood’s film Ford v Ferrari) were reserved for the affluent, many more could scrimp and save in order to park a Mustang in their garage.

The Villain can be commissioned at a starting price of $154,900.  Photo: Courtesy of Classic Recreations.

All that to explain why this storied American classic—which Ford keeps massaging, now with a dynamic manual transmission and soon in electric-motor configuration—is a natural subject for a restomod, the process of taking glorious automotive shapes from the past and remaking them with reliable and powerful 21st-century enhancements. The good folks at Oklahoma-based Classic Recreations have chosen one of the most attractive, if not outright legendary, versions of the Mustang to work over: the 1968 Mustang Fastback, the co-star of the movie Bullitt along with a guy named Steve McQueen.

The original Mustang Fastback body is given subtle modifications, many in carbon fiber.  Photo: Courtesy of Classic Recreations.

Starting with that compelling and genuine shell, Classic Recreations‘ founder, Jason Engel, has built a powerful and altogether usable tribute that he calls the Villain. The first production version of the car is now complete, and you can build your own starting at $154,900. What you’ll get is that arresting Fastback body but with subtle modifications, many in carbon fiber, that the company says are meant to save weight and increase aerodynamic efficiency while always respecting the original lines. Under the hood is a twin-cam, fuel-injected Ford Racing 302 “Coyote” V-8 that’s good for 475 hp. Spring for the supercharger and you’ll be rewarded with a whopping 770 hp that is sure to shock the Porsche 911 sitting at the light next to you.

The goal throughout the car was to keep the spirit of the original Mustang alive while making the Villain more of a daily driver that can roast most other cars on the road. That means Engel has opted to get rid of the original rear leaf springs and has installed a Detroit Speed aluminum subframe with a modern coil-over suspension. Add in modern rack and pinion steering and you’ve got a docile boulevardier when you want one, and a blistering but controllable street racer if you need that. And Wildwood six-piston brakes ensure that the stopping is as good as the going.

Inside, a retro vibe mixes with modern upgrades. You’ve got the dual-hump Mustang dash of yore, a classic Sparco three-spoke steering wheel and a sparkling, long-necked shifter on the floor. But new high-back seats keep you from sliding around in a way that the originals never could, and the gauges combine bling with old-school design.

Roll up in a Villain, perhaps one decked out in your choice of colors (and maybe sporting that optional supercharger), and it’s hard to imagine much competition for eyeballs on the block.

And while there are many folks on the automotive world with the skills to deliver a Mustang restomod, Engel has a particularly unique calling card. He built the 1967 Shelby GT500 “Eleanor” that was featured in the Nicolas Cage movie Gone in 60 Seconds. You may have a bit more time than that to nab Engel’s latest star vehicle.