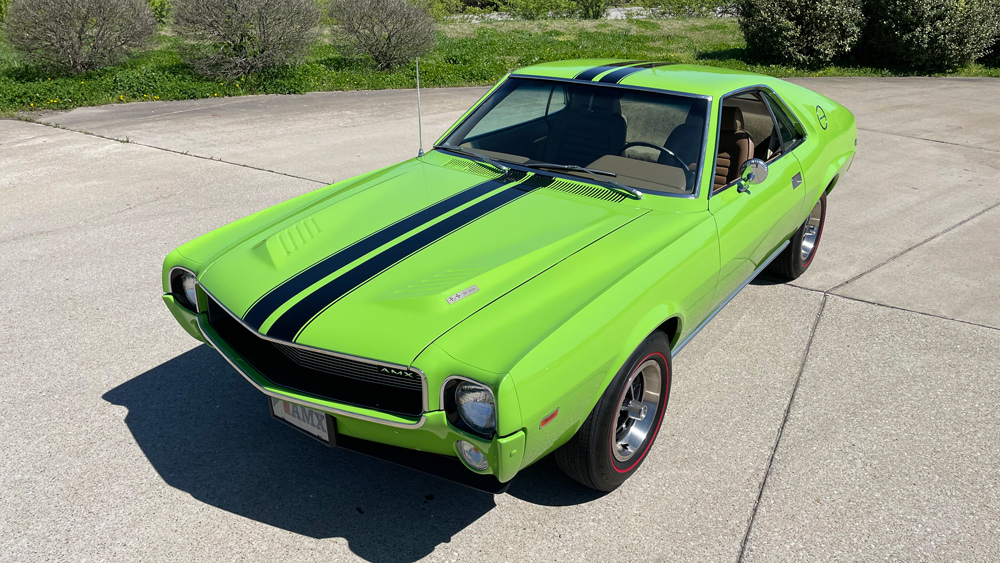 When it comes to automotive marques, AMC is not exactly a household name, and likely unknown to anyone born after the demise of the company. American Motors Corporation was wheezing along on financial fumes when Renault acquired a major interest in 1979. By the time AMC was renamed Jeep Eagle in 1988 and finally absorbed by Chrysler in 1990, its best years were long since behind the brand.

What used to be America’s number-four carmaker began in 1954 as the coming together of Nash and Hudson to represent the largest corporate merger in American history. Of course, AMC was still quite a distance behind the Big Three—GM, Ford and Chrysler—in terms of volume and revenue, but found a niche with a lineup of smaller cars like the Nash Metropolitan and Rambler American. The company was not without its memorable models. Some, like the AMC Pacer, remain the archetypal expression of aesthetic oblivion, but such is that car’s charm. (Squint your eyes and it’s a Porsche 928!) And for a few brief years, AMC made some truly exciting performance cars.

This 1969 AMX California 500 Special is one of several AMC cars that will be presented by RM Sotheby’s from a collection in Nashville, Tenn.  Photo: Courtesy of RM Sotheby's.

The upcoming RM Sotheby’s Open Roads auction, held online April 21 through 29, features a rare assortment of AMC models that infrequently come to market, especially in such remarkable condition. From a single collection in Nashville, Tenn., these include a 1979 AMX, a 1974 Javelin AMX, a 1972 Gremlin X (5-liter), a 1970 Hornet SC/360 and a 1969 AMX California 500 Special. While each of these may be an odd footnote in the book of American performance cars, each has its own appealing attributes, and in the case of the 1969 AMX California 500 Special especially, a serious collector following.

The model was only offered in 1969 to commemorate that year’s racing season at Riverside International Raceway in Southern California.  Photo: Courtesy of RM Sotheby's.

With pony cars like the Chevrolet Camaro and Ford Mustang taking the lion’s share of the domestic performance-car market in the late 1960s, AMC jumped in with a daring model called the AMX. The original design, introduced in 1968 and made only through 1970, was distinguished as the only US-built two-seat sports car available at the time, apart from the Chevrolet Corvette. It was also notable for its short wheelbase. At a mere 97 inches, it was one inch shorter than the ’Vette, and at about $3,250, about $1,000 less expensive.

It’s estimated that only 23 examples of the California 500 Special were made wearing the original pace car’s color scheme.  Photo: Courtesy of RM Sotheby's.

The name AMX refers to American Motors eXperimental, a name used for some radical concept cars shown a few years prior. The AMX moniker was used on subsequent four-seat Javelins from 1971 through 1974, as well as later models bearing no relation to the original—and most notable—cars like the California 500 Special offered here.

The two-seater features a saddle-leather interior.

AMC’s V-8 engines powered the AMX, and customers had a choice of a small-block 290 ci, a 343 ci or a 390 ci (6.4-liter). The latter was a big block that made 315 hp and 425 ft lbs of torque, allowing the car to cover zero to 60 mph in about 6.5 seconds, a healthy number for the day. Top speed in street dress was under 125 mph, but handling was the name of the game for the AMX. A Borg Warner four-speed transmission, front disc brakes and traction bars were standard equipment. The year 1969 introduced “Big Bad” paint options in Green, Blue and Orange, and these are the colors that make the first-generation AMX such a stand-out muscle car.

This California 500 Special was a limited series, offered in 1969 and sold only through members of the Southern California American Motors Dealer Association as part of a marketing campaign to commemorate the 1969 season at the Riverside International Raceway. The pace car for the race was a 390 ci AMX painted Big Bad Green with black stripes. It was also given a saddle leather interior, “Sidewinder Exhausts” and commemorative brass plaques. Out of an estimated 283 green examples made in 1969, it is estimated that only 23 were California 500 Specials that wore the pace car’s same color scheme and accents. Muscle car enthusiasts appreciate the AMX for its looks, performance and rarity. Of them all, the California 500 Special is just about the rarest of the rare.