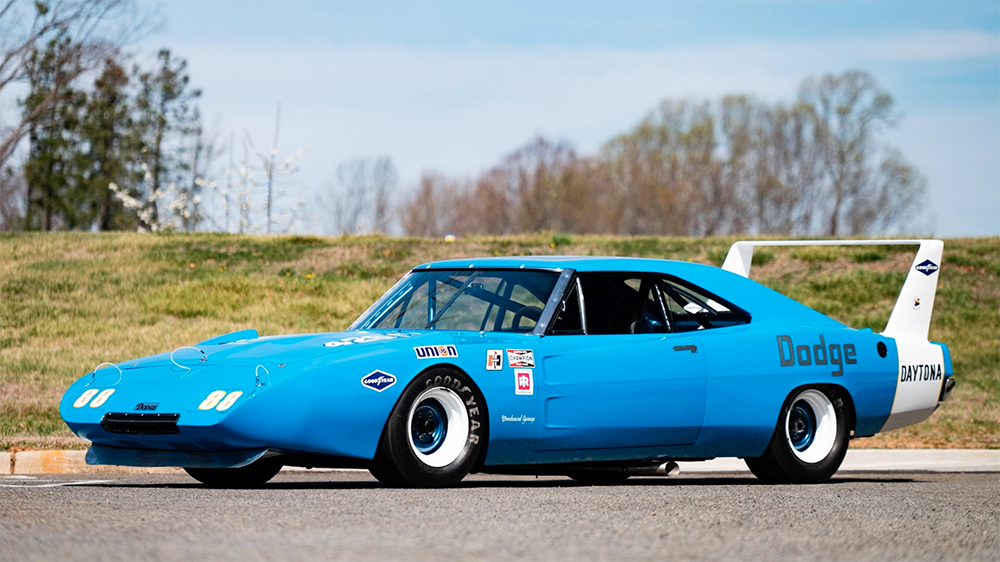 These days, cars are starting to eclipse 300 mph, but at the dawn of the 1970s the number to beat was 200 mph. Now the first car to beat the mark could be yours.

Buddy Baker’s 1969 Dodge Hemi Charger Daytona was the first to accomplish this feat, and now the race car will hit the block at Mecum Auction’s Indy 2022 sale next month. The race car, which is currently owned by legendary NASCAR crew chief Ray Everham, played a vital role in motorsports history and is exactly the kind of vehicle serious collectors want in their garage.

This particular Charger Daytona, serial number DC93, started its life as a press vehicle before being converted into a race car so it could be entered in the 1969 Daytona 500. Following the race, it was converted again for use in aerodynamics testing, but was back racing by the time the inaugural Talladega 500 rolled around that September. It started on the poll at that race after Charlie Glotzbach broke the world speed record for closed course lap average at 199.446 mph in it during qualifying. That mark wouldn’t stand for long, though. On March 24, 1970, Baker was piloting the car when it set an official lap speed of 200.447 mph at the same race track. The car would race for a handful more years before being retired in the mid-‘70s.

It took some serious grunt to break the 200-mph barrier. In the case of the Charger Daytona, it came courtesy 426 cu in Hemi EX-144 V-8. Equipped with a Holley Dominator carburetor and mated to a four-speed transmission that sent power to the rear axle, the might mill was capable of generating a ferocious 575 horses. Needless to say, Baker and the other drivers who got behind the wheel had little trouble pushing it to the limit.

The car still wears the same blue and white racing livery—which earned it the nickname the “Blue Car”—and the no. 88 it donned when Baker broke 200 mph in March 1970. That’s because Everham has it fully restored to 1969 top speed spec after acquiring it from NASCAR historian Greg Kwiatkowski. It was also authenticated by George M. Wallace in 2001.

Inside the The Charger Daytona’s Hemi V-8  Mecum Auctions

Baker’s Charger Daytona is set to cross the block on May 21. Mecum is selling the car without reserve, but we imagine It’ll hammer down for a hefty sum. As Jalponik points out, Charger Daytonas were selling for seven figures during their mid-aughts auction peak. Considering the historical importance of the speed machine, we wouldn’t be surprised if this one does, too.

Check out more photos of the record-setting Charger Daytona below: