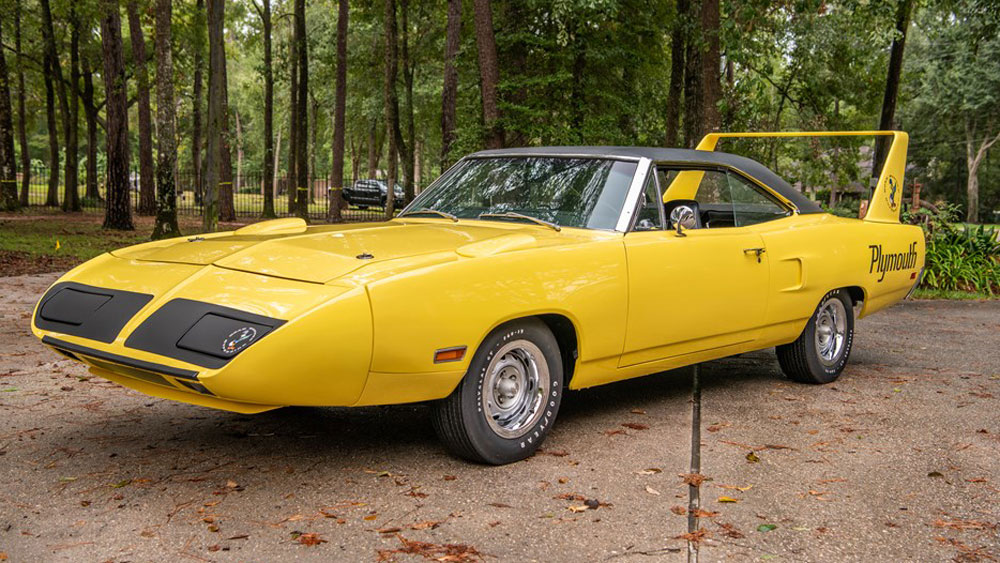 It’s a car that, on first glance, brings back memories of the timeless cartoons featuring an avian speed demon constantly teasing and outmaneuvering a certain wily coyote. Indeed, the similarities are no accident. The Plymouth Superbird, a variant of the automaker’s Road Runner model, was built to be fast and torment the competition. It even bears the animated character’s visage on the exaggerated rear wing and sounds off its signature “meep, meep” through the horn. But now, one elusive example is ready to be caught.

Available through the online-auction platform AutoHunter, the 1970 Plymouth Superbird on offer is among a field of less than half the model’s total number—approximately 1,935 units—to be fit with a four-speed manual transmission, the majority receiving a three-speed automatic. All versions of the car were built solely in that year and had been developed for NASCAR homologation as Chrysler’s successor to the Dodge Charger Daytona and an answer to Ford’s Torino Talladega.

It’s also widely acknowledged that the Superbird was made to bring “the King” of motorsports himself, Richard Petty, back to Plymouth from, you guessed it, Ford. Behind the wheel of his Petty Blue–colored Superbird, the Hall of Fame driver took the checkered flag in eight races that season. NASCAR’s subsequent tightening of performance restrictions and the public’s less than enthusiastic response to the vehicle’s rather cartoonish look, quickly clipped the Superbird’s wings.

The Road Runner decal on the back of the driver’s-side headlight.  Photo: Courtesy of AutoHunter.

The production example currently on the digital block has undergone a comprehensive restoration since its current steward acquired it about three years ago and added only 20 miles to the odometer. Before that, it had one other owner in the last two decades and has a total of 39,309 miles on the clock.

The muscle car’s extreme aesthetic is owed to its elongated steel nosecone and enormous rear wing, the latter measuring 64 inches in width and an attention-grabbing 24 inches in height. In case that doesn’t catch the eye, the body has been returned to its factory paint scheme of Lemon Twist Yellow—subtlety is not in the Superbird’s wheelhouse.

Although the model was offered in three engine options, the most potent being a 426 Hemi V-8 that made 425 hp and 490 ft lbs of torque, the example presented originally came with a four-barrel-carburetor 440 Super Commando engine. That power plant has since been replaced by a still-period-correct V-8 fit with three two-barrel carburetors.

The interior remains true to the time, with its three-spoke steering wheel, factory-spec bucket seats and faux wood trim for the dash and pistol-grip gear shifter. One thing that’s also true is that the current bid of $20,000 is not going to last long, especially since there’s a reserve and similar examples have sold well into six figures. The real cliffhanger is whether or not this Superbird escapes a collector’s clutches when bidding ends October 19.