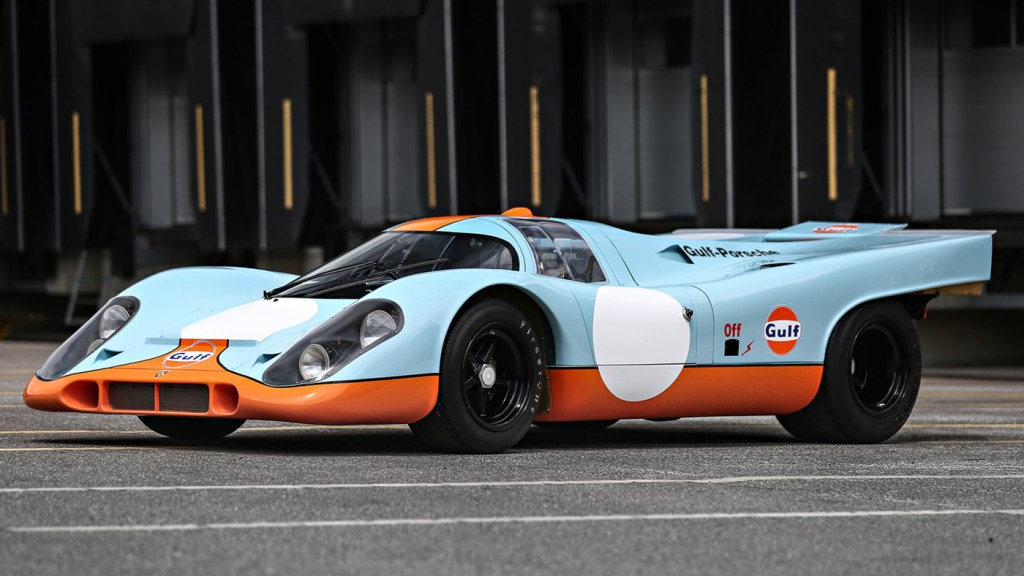 When it comes to marques with the most wins at Le Mans, Porsche currently reigns supreme with 19 first-place finishes, a legacy launched by the Porsche 917K. An exquisite example of the model—one featured in Steve McQueen’s film Le Mans—is set to cross the block at Gooding & Company’s Pebble Beach Auctions on August 18 and 19.

“We have never had a 917K Porsche at auction until now,” says David Gooding, founder and president of Gooding & Company. “And this is a wonderful example with a well-documented history. Not only was it used in Steve McQueen’s movie, but it was the personal car of one of the all-time great Porsche 917 drivers, Jo Siffert.”

A competitive successor to the Porsche 908, the 917 features a 93-pound spaceframe chassis and was originally fit with a 4.5-liter flat-12 engine. The car was designed by Hans Mezger and constructed in 10 months in order to enter the 1969 24 Hours of Le Mans endurance race, an event dominated by Ferrari and Ford throughout the 1960s. Disaster and disappointment were the initial results, however, as none of the 917s finished, one due to a crash that killed its driver John Woolfe.

In response, Porsche worked with John Wyer and the JWA Gulf Team to improve downforce by truncating the vehicle’s rear section. The Kurzheck (“short tail”) variant was born, and the 917K took the checkered flag at Le Mans in 1970 and 1971, piloted by the diving duos of Hans Hermann and Richard Attwood and Dr. Helmut Marko and Gijs van Lennep, respectively.

The example at auction, chassis No. 917-024, was raced by Brian Redman and Mike Hailwood in the 1970 Le Mans Tests and recorded the fastest time of the sessions with Redman behind the wheel. Soon after, the car (powered by a 638 hp, 5-liter flat-12) came into the possession of Jo Siffert, the legendary Porsche racer who had wins at the 24 Hours of Daytona, the 12 Hours of Sebring, and the Targa Florio among other contests.

It was Siffert who allowed the car to be used by Steve McQueen’s Solar Productions as one of the star vehicles used by the actor for the filming of the 1971 movie Le Mans. It had been noted by the late Walter Näher, an author and 917 historian, that chassis No. 917-024 was one of three 917Ks to be used both behind and in front of the camera—a role that most likely included being driven by McQueen himself. When filming finished, the car was returned to Siffert, who enjoyed it until his untimely death at the 1971 World Championship Victory Race in England. It was his prized Porsche that lead the funeral procession.

One of the three Porsche 917Ks used during the making of Le Mans is seen behind John Sturges (left) and Steve McQueen (right).

No longer under Siffert’s stewardship, the race car remained off the radar until 2001, when it was discovered in a warehouse near Paris. Currently part of a private collection in Europe, it underwent an extensive restoration by Switzerland’s Graber Sportgarage that was completed this year.

The preeminent Porsche 917K, estimated to fetch between $13 million and $16 million, will be one of 139 lots (at time of writing) to be presented by Gooding & Company, the official auction house of the Pebble Beach Concours d’Elegance since 2004. Bidding will be accepted in person, by telephone, and in absentia.