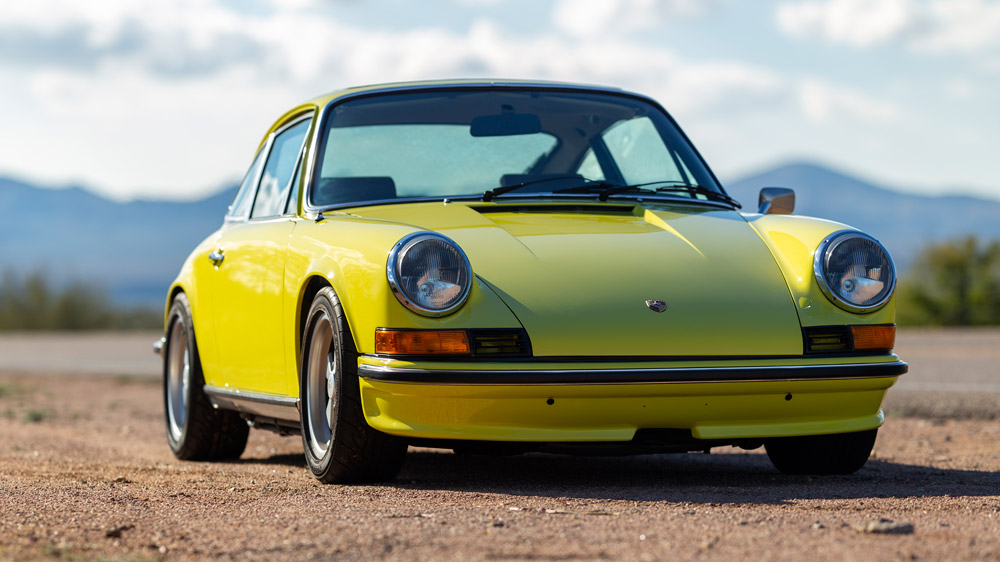 Despite an oil crisis that effectively killed American muscle cars, the automotive industry during the early 1970s continued to produce smooth-riding and classically styled sports cars, and Porsche was a major player in that effort.

Much like Italian sports cars of four decades past, classic Porsche 911s from the era are trending up within the car-collecting universe—an appreciation that reveals that a younger generation of car collectors has emerged. It is also an indication that collectors of all ages are discovering the appeals of 1970s sports cars.

Best of all, because the market is still developing for these models, some can be had for a fraction of what they may one day be worth. During the recent Scottsdale auctions, the following six early-generation Porsche 911s that crossed the block prove that demand is on the rise—and the values are destined to follow.

This car underwent an extensive restoration in 2014.  Photo: Courtesy of Gooding & Company.

Three years after Porsche debuted the 911, the German automaker unveiled the 911S, a model variant distinguishable by enhanced performance in all categories. “An S is always the most desirable version,” explains Gooding & Company specialist David Brynan. “It was the top of the line, the fastest one that Porsche offered, with the best equipment.” As part of Gooding & Company’s Scottsdale auction, a 1973 Porsche 911 2.4 S crossed the block, enticing the marque’s enthusiasts and collectors with its unusual, special-order black finish and a handful of subtle distinctive features that reflect the car’s original Italian delivery. In 2014, this particular example underwent an extensive, show-quality restoration, which enhanced its desirability and contributed to the car selling for $240,800.

The car carries less than 26,000 miles on its odometer.  Photo: Courtesy of RM Sotheby's.

Similar to the aforementioned 911 2.4 S, this 1973 Porsche 911 S Coupe rolled across the RM Sotheby’s stage one day earlier and sold—with no reserve—for $156,800. According to Alexander Weaver, a specialist with RM Sotheby’s, the coupe embodies a plethora of desirable characteristics—it remains in mostly original condition, including its 2.4-liter engine; it represents the last generation of 911 S variants; it retains its special-order silver metallic paint scheme, and it’s been driven fewer than 26,000 miles. “Those are all the right answers for somebody who is looking to collect a car like this,” says Weaver.

A matching-numbers engine adds to the value of this example.  Photo: Courtesy of Bonhams.

From the 911’s early years through 1973, the iconic Porsche model featured a longhood body design, which echoed the 356—a model that the 911 effectively replaced. The late generation 911 S’s, including this 1973 Porsche 911 S 2.4 Coupe, provided more torque and featured a revised five-speed manual transaxle, which made for a smoother driving experience. This cemented the model as an honest grand tourer. The ’73 911 S Coupe that sold through Bonhams (without a reserve) for $131,600, is distinct for retaining its matching-numbers engine. It also features a bevy of desirable factory-installed equipment, including an electric sunroof, Koni shocks, sport seats, and an auxiliary oil cooler.

A 1972 Porsche 911 T in its period-correct color scheme.  Photo: Courtesy of Gooding & Company.

In 2013, experts at Accumoto Motorsport in Wisconsin completed a 1,300-hour restoration project to this 1972 Porsche 911 T, refreshing the classic coupe with upgraded mechanics and authentic details. The car features an enhanced 2.7-liter engine (with 2.9-liter capacity), along with a 915 transaxle—that runs custom gear ratios—and a lightweight Sachs Power Clutch, among other mechanical modifications. And all are packaged within a body presented in a period-correct Tangerine paint scheme. “Porsche 911s have become like the ’32 Ford—they’re a blank slate to individualize and modify,” says Brynan of Gooding & Company. “There are plenty of people who want more power. That’s more popular with younger buyers. So somebody could say this is exactly what I want.” That’s exactly what happened, as the car sold for $137,200, a price right in line with the 911 T’s presale estimate.

In most cases, a Porsche 911 T Targa wouldn’t garner much attention, not in a lineup of classic 911s.This 1973 Porsche 911 2.4 T Targa, however, bucks that trend. The car’s original owner enjoyed driving it for about five years, then properly stored it for almost four decades. Because of that chronology, the car remains in its original condition—down to its white paint and black leather interior. “As time goes on, more and more of these cars get restored and change hands,” says Brynan, “so to find a car like this is really significant.” The German sports car is also equipped with a Bosche Mechanical Fuel Injection system, which Brynan explains is much more attractive than the CIS (continuous injection system) that became a standard component in Porsches shortly after this particular Targa was built. “It’s a more primitive system,” he says, “but it has a different character to it. It has a more visceral mechanical feel to it.” Offered without reserve through Gooding & Company, the car sold for $117,600.

Like the aforementioned 1972 Porsche 911 E that crossed Gooding & Company’s block, this 1974 Porsche 911 ‘Outlaw’ offered those at the RM Sotheby’s auction a chance to bid on a desirable, highly modified German grand tourer, one that is aptly suited for the track or the open roads. Featuring an integrated roll cage and sport seats—along with upgraded bodywork, drivetrain, and suspension—this bandit, of sorts, is powered by a 993 Carrera 3.6-liter engine capable of an estimated 340 hp. Brief tests at Road America also suggest that the car could reach a top speed close to 150 mph. Offered without reserve, this custom 911 exchanged hands for $92,400. “This is something that I would want to own,” says Weaver. “It has the right look and the right combinations. Some [modified Porsches] are cobbled together. This is a well-thought-out, well-executed example. Somebody went all the way with it.”