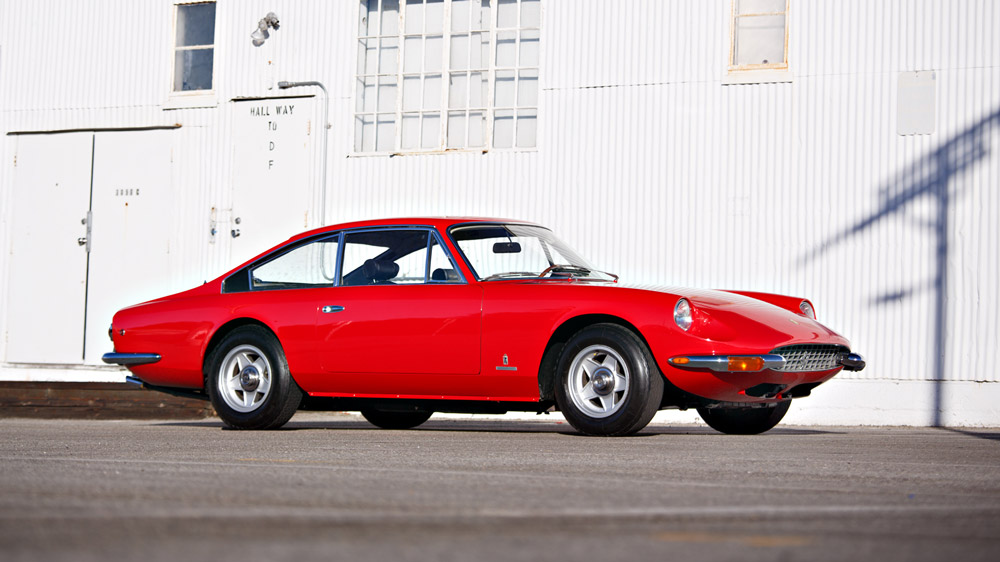 As we close in on the start of another decade, car collectors are discovering that 1970s-era coupes, roadsters, spiders, and GTs offer more comfortable, more reliable, and more manageable driving experiences than their counterparts from the 1950s and ’60s. As younger generations enter the hobby, those enthusiasts are seeking out the poster cars that they aspired to own and drive during their younger years.

As evidenced by the recent auctions in Scottsdale, Ariz., sports cars from the 1970s are also beginning to see an uptick in value. The following five Italian classics all exchanged hands earlier this month at sales hosted by RM Sotheby’s and Gooding & Co., and they represent a category of classic collector cars that could be poised for bigger things in the near future.

No one wants to peak early in life; and everyone wants to believe their best years are ahead of them. As for this 1971 Ferrari 356 GTB/4 Daytona NART Spider by Michelotti, its best years—from a desirability standpoint—are likely just beginning. Built as a standard Daytona for the American market at the onset of the 1970s, the car was equipped with factory air-conditioning and power windows, but it was rebodied five years later by Giovanni Michelotti, at Ferrari North American Racing Team owner Luigi Chinetti’s request (hence the NART designation). It is one of five open cars that feature a single, uninterrupted beltline from bumper to bumper, and an angular, sharklike nose.

“The styling characteristics of this car are more appreciated now than they were in the past,” says RM Sotheby’s specialist Alexander Weaver. “It’s a completely different style than what Ferrari was building at the time. It looked a lot more modern and contemporary than a regular Daytona spider.” It sold in Scottsdale for $670,500, which Weaver considers a bargain. “Everybody is looking for the most exclusive car they can find,” he explains. “A front-engine V-12 Ferrari convertible from the 1970s for under a million dollars seems like a steal.”

By the beginning of the 1970s, the success of Ferrari and Lamborghini had sparked the creation of a number of Italian-American sports car companies, including Intermeccanica—an auto manufacturer that was first headquartered in Torino, Italy, before later relocating to North America. From 1967 to 1972, the company built about 500 Italia Spyders—sports cars that married American engines and mechanical components with the classic lines and styling for which Italian automakers had grown famous.

“You have the look of a Ferrari at a price point that’s a lot more reasonable, and it’s a car that’s much easier to work on,” Weaver says, touting the merits of this 1972 Intermeccanica Italia Spyder, which sold for $123,200. “If things break, you can fix it easily. Your local auto parts store will have the mechanical parts that you can pick up. And the cars are still sexy.”

The old adage that looks can be deceiving aptly applies to this 1974 De Tomaso Pantera L by Ghia, which sold for only $61,600, an amount that belies the cultish desirability of this distinctly shaped Italian sports car, since it remains mostly in original condition, with fewer than 25,000 miles on its odometer.

The 1974 De Tomaso Pantera L by Ghia that sold in Scottsdale  Photo by Peter Seabrook, courtesy of RM Sotheby's.

“Most Panteras have been monkeyed around with and made into hot rods,” Weaver explains. “This one has never experienced that. The fact that this one has remained original is really cool. It’s a really good, honest, unmolested car with low mileage, and the yellow looks great on it.”

When Ferrari unveiled the 365 GT 2+2 at the Paris Auto Show in the fall of 1967, the tourer attracted attention thanks to its body styling, which echoed the brand’s 500 Superfast, not to mention a bevy of new standard features, like power steering, air-conditioning, and a four-wheel independent suspension. When this particular example, a 1970 Ferrari 365 GT 2+2, crossed Gooding & Co.’s auction block in Scottsdale, it again attracted plenty of attention since the car had spent the previous 24 years hidden away in the consignor’s heated garage.

“That it’s fresh to market is really interesting,” explains Gooding & Co. specialist David Brynan. “People are keen on buying a car that hasn’t come to auction before or hasn’t been seen before.” Offered without reserve, the car sold for $212,800, only a few thousand dollars shy of its presale estimate. Although it requires some standard maintenance before it’s once again ready for the road, the car, as Brynan explains, is in optimal condition given most buyers’ agendas. “It can just be driven and enjoyed more or less in its current condition,” he says. “Most people looking for these cars want to use them, so its condition is ideal for that.”

Like the aforementioned 365 GT 2+2, this 1972 Ferrari Dino 246 GT spent more than two decades out of sight, protected in the consignor’s heated garage. Aside from the car’s desirability as an example not seen for more than 20 years, this car is a bit of a rarity, since fewer than 1,300 Dinos were built for the U.S. market over the model’s lifetime.

According to Brynan, the car appeals to a broad audience, since most serious Ferrari enthusiasts will seek out a Dino for their collections, while others, who may not be able to afford a classic Ferrari with a 12-cylinder engine, will see a Dino as the next best thing. Best of all, this particular Dino—in fine working condition—satisfies a lot of prospective owners’ intentions, which is why it sold for $240,800. “It’s a safe, attractive buy,” Brynan says of the car. “It doesn’t have an immediate need for a full restoration, but if you wanted to do that at some point, it’s a car that’s worthy of that.”