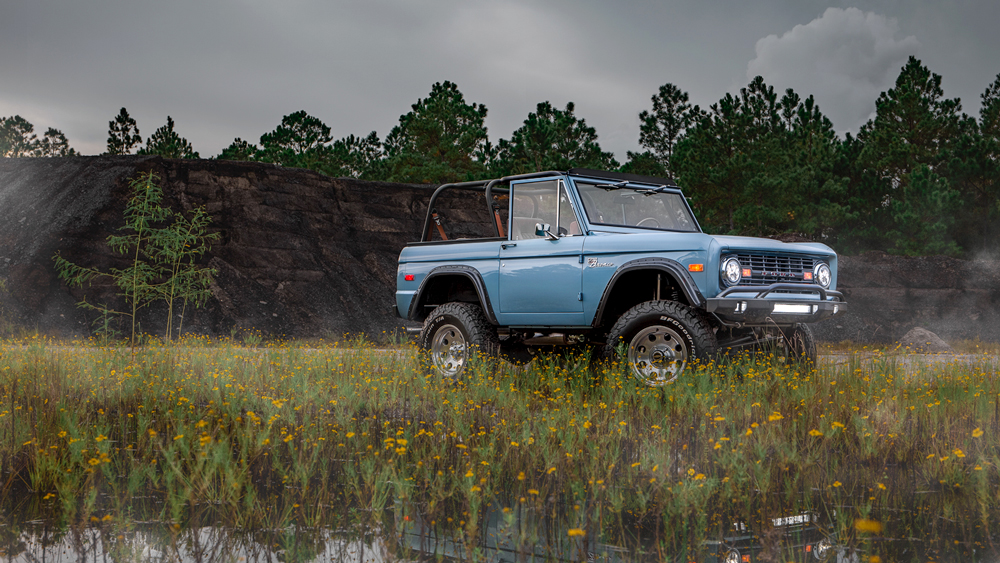 The specialists at Velocity Restorations know a thing or two about breathing new life into classic Ford Broncos. The Pensacola, Fla., shop was founded over a decade ago by friends and Bronco fanatics Stuart Wilson and Brandon Segers, who had both bought and restored their own original Broncos within six months of each other. Today, the shop completes around 15 to 20 custom Broncos each year, with each restoration requiring about 1,500 hours of labor and about nine months to gestate.

If you’re wondering where all that time goes, you need look no further than the shop’s latest completed project, a fully tricked-out blue Bronco from 1973. A complete frame-off restoration, the original truck’s inline-six engine was replaced with a five-liter Coyote engine from Ford Racing, which generates multitudes more hp than the two-figure numbers put out by the original. The new engine is mated to a modern Ford 4R70W 4-speed transmission, and the whole truck rests on a suspension that has been raised 3.5 inches.

The Bronco’s front and rear axles were upgraded, and a custom exhaust was added. To help rein in the new power of the blue beast, Wilwood disc brakes have been added to each wheel. Custom bumpers, new headlights, new front and rear sway bars, and a beautiful cornflower-blue paint job round out the package.

Yet Velocity Restorations didn’t neglect the interior, either. After all, modern consumers expect modern comforts—even when their base vehicle is 45 years old. To bring the truck’s interior up to speed, so to speak, Velocity replaced the old gauges with a custom digital dashboard, added a Bluetooth stereo system, put in a six-point roll bar, and installed a new heating and air-conditioning system. The seats, side panels, and other details are covered in hand-stitched brown leather.

The 1973 Bronco is priced at $229,000, but if Ford trucks aren’t your thing, be aware that Velocity Restorations has taken on a number of other vintage car projects, including the restoration of this 1979 International Harvester Scout II that we profiled recently.