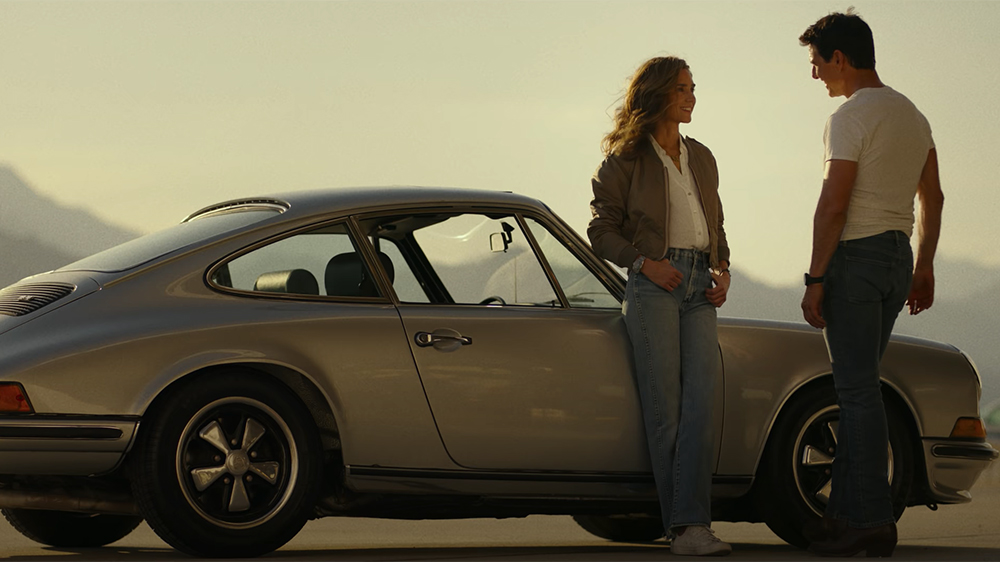 If you want to catch Pete “Maverick” Mitchell’s eye, it helps to drive a Porsche.

It’s easy to see why Connelly’s character loves her car so much. The 1973 911 S is true beauty beloved by enthusiasts because of its long nose and slim, pre-impact bumper. Because of toughened safety standards, later models sold in America came with chunkier bumpers that some still consider unsightly. The high-performance variant is also powered by an air-cooled flat-six mated to a fast shifting Type 915 transmission and was capable of churning out 195 horses, a more than respectable figure for the era.

“Penny sails fast boats, so I liked the idea that she drove a vintage Porsche as well,” director Joseph Kosinski told Bloomberg Businessweek. “I think the 1973 911 S model is one of their most timeless designs.”

Notably, the 1958 356 driven by Kelly McGillis’s Charlie in the first Top Gun was a replica, while the coupé driven by Connelly’s character is a number’s matching original, as is the 1973 911 E used as its backup. The main car was loaned to the production by San Diego resident Nick Psyllos. The longtime collector has a thing for Porsches, having owned, including a 1972 ST tribute car in tangerine orange.

After the 911 S’s co-starring role in Top Gun Maverick, we’re pretty sure it’ll become the most meaningful car in his collection. Or, at the very least, the most valuable. Concours-quality examples of the sports car have been known to sell for in excess of $200,000. When you add in the fact that this one is a movie car, it could be worth a lot more. After all, last fall the 1979 Porsche 928 that Cruise drove in Risky Business sold for $1.9 million.

Of course, that pricetag won’t mean much to Psyllos. He doesn’t have to worry about buying Penny’s 911—he already owns it.