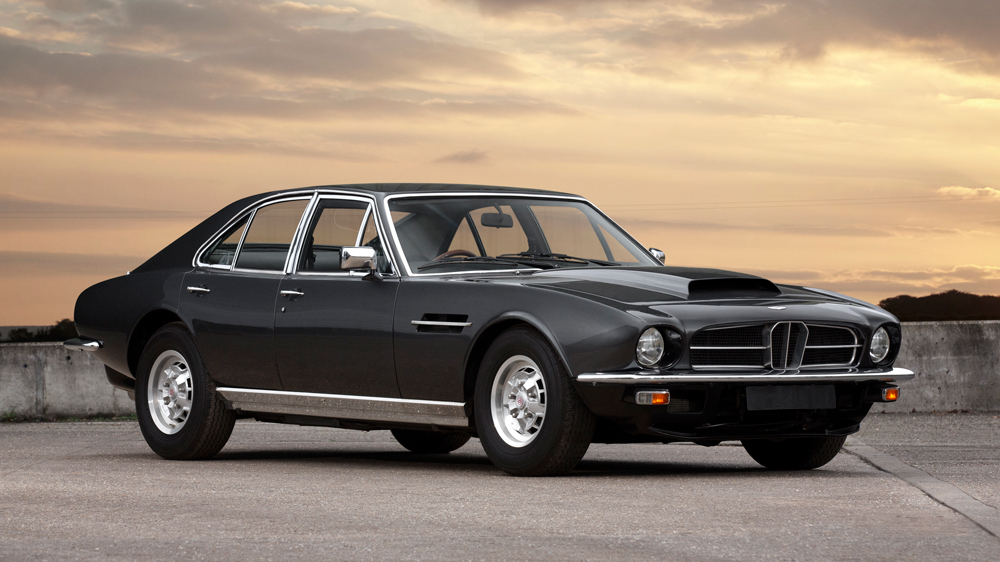 Ever since Agent 007 chased evil with his highly optioned 1963 Aston Martin DB5 in Goldfinger, the rare British marque has been known as the gentleman’s sporting GT of choice. What’s less known is that, apart from the film-car’s star status, Aston Martin was—like the Bond character—routinely finding itself in new predicaments, sometimes perilously close to extinction and, in the case of the carmaker, often looking for an escape route to financial equilibrium.

Product diversification dangled the carrot of added revenue, and the Lagonda marque, absorbed by Aston Martin in 1947, afforded an opportunity to offer a sporting luxury sedan called the Lagonda Rapide. With only 55 built from 1961 to 1964, the model was bodied by Carrozzeria Touring of Milan. As Touring was the same coachbuilder responsible for the design of the Aston Martin DB4, the Lagonda Rapide was essentially that car under an aluminum four-door skin.

Bonhams will be auctioning off this 1975 Aston Martin Lagonda Series I on April 10.  Photo: Courtesy of Bonhams.

A decade passed before Aston Martin resuscitated the Lagonda name, introducing a four-door based on its current two-door V-8 model at the time, the DBS. The project is claimed to have been inspired by Aston’s then-owner David Brown, who wished to be chauffeured in a sedan of his own making, using a prototype developed in 1969. It was five years until the first production version was unveiled at the London Motor Show in October 1974. The car had a £14,040 price, which was nearly 25 percent higher than the two-door Aston Martin. The cost, in tandem with the crushing Mid-East oil crisis and political turmoil in Europe, made the model a tough sell.

With a wheelbase spanning a foot longer than its Aston Martin sibling, the dachshund-like Lagonda Series I is, like my favorite dog breed, a delightful oddity, though nowhere near as unusual as its futuristic, wedge-shaped successor. That Lagonda, of which a total of 645 examples were built comprising the Series II, III and IV (from 1976 through 1990), is an altogether different beast and worthy of its own forthcoming story.

Along with its right-hand-drive configuration, the interior features an upgraded entertainment system, climate control and soundproofing.  Photo: Courtesy of Bonhams.

On April 10, the Bonhams Goodwood Members’ Meeting sale will feature a very special Series I, the sixth of only seven cars built through 1976 (though an eighth was built in 2007, long after official production of the model ended). While any Series I is a genuine rarity, this 1975 example was the Earls Court Motor Show car, and benefits from a full, ground-up restoration by the late Richard Williams, who had been an expert in the marque. Williams was already the owner of a concours-winning Series I when he acquired this car in 2005.

Work began on behalf of a client to whom Williams sold the car in 2006, and through the process, #12006 benefitted from numerous improvements. Importantly, the original V-8 engine was enlarged from 5.3 liters to a whopping 7.0-liters—an RS Williams specialty. This increased output from 320 hp to 480 hp, and torque from 350 ft lbs to an impressive 550 ft lbs, delivered through a reengineered Torqueflite automatic transmission.

Aston Martin’s rakish 1975 fastback is what one would imagine a British Camaro or Mustang to look like.  Photo: Courtesy of Bonhams.

The Anthracite Gray exterior is complemented by an interior retrimmed in grey hides and is, unsurprisingly, configured with the steering wheel to the right. Subtle improvements include an upgraded entertainment system, climate control and soundproofing.

The cabin has been retrimmed in grey hides.  Photo: Courtesy of Bonhams.

Showing only 3,200 miles since its restoration, the car has been on static display since 2012. The future owner has the opportunity to reawaken that splendid 7.0-liter V-8, hit the road and surprise even the most seasoned Aston Martin anorak with a car they’ve likely never seen before. And though the estimated value for this particular Lagonda Series I is between $260,000 and $400,000, it will be offered at no reserve.