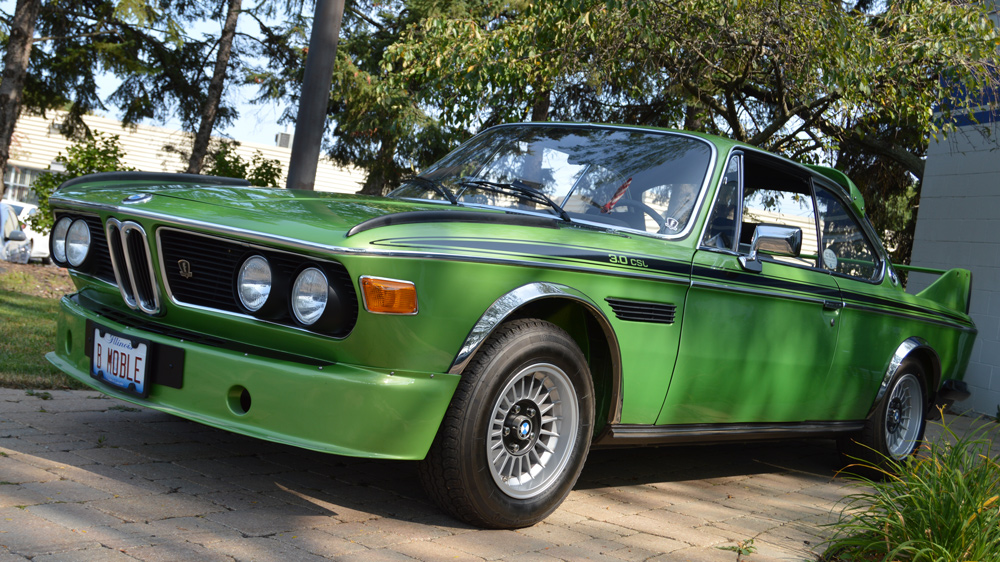 Photo: Courtesy of the Werk Shop.

In the late 1960s and early 1970s, long before BMW became a mass-luxury brand name, the marque was known for building sporting cars that combined Bavarian frugality, solid German engineering and—if one squints one’s eyes and imagines—sober, attractive style. The automaker had shed its reputation for lavish antiquated barges like the model 502 “Baroque Angel” and the money-losing 507 sports car, and embarked on a new mission.

Pivotal to the change in direction was the 1600 and 2002 series (an altogether longer and most interesting story). But BMW customers had a taste for sporting luxury that would never be sated by the boxy ’02 and, by the way, BMW had a perfectly delightful inline-six engine with which to power a more substantial car. The most beautiful by far was the 3.0 series E9, which began as a 2.8-liter version with the 1968 2800 CS. The later 3.0 CS, introduced in 1971, has since become a top-tier BMW collectible. From that car, BMW developed a lightweight 3.0 CS for the road called the 3.0 CSL, a homologation model for racing.

The story is one of strong personalities, and when Bob Lutz came on board as head of sales in 1972, he created BMW Motorsport, enlisting engineer Jochen Neerpasch to further develop the 3.0 CSL for competition in the European Touring Car Championship. The lightweight construction and unusual aerodynamic accoutrements applied to the race cars earned them the “Batmobile” moniker from fans, a fitting nickname for vehicles with flaps and fins worthy of the Caped Crusader.

In reality, the front-fender-mounted air rails aided stability, while deeper wheel wells allowed fitment of 7-inch Alpina alloy rims. A locomotive-like front air dam and a towering rear spoiler—not street legal and delivered unmounted in the trunk—kept the car planted on the track. The first lightweight version debuted in 1971 with 180 hp and weighing nearly 500 pounds less than the model from which it was derived. It tips the scales at about 2,800 pounds, thanks in part to sheet metal that was thinner than standard, along with the use of aluminum for the doors, hood and trunk lid.

In its final iteration, introduced in 1973, the Batmobile developed a then-impressive 206 hp from a 3,153 cc engine. The power plant allowed for a top speed of 137 mph. The fame of the CSL was advanced not just on the track, but with the launch of the BMW Art Car series in 1975, when a 3.0 CSL was painted up by American sculptor Alexander Calder. In 1976, artist Frank Stella used a 750 hp CSL as his canvas, dressing it with a black-and-white grid of squares reflecting his Protractor series of paintings.

The example on offer is predominantly unrestored.  Photo: Courtesy of the Werk Shop.

While more than 1,000 units of the 3.0 CSL were made, only 167 of the final road-going 3.2-liter cars were delivered with the Bat costume, including the front air dam, fender strakes, basket-handle roof spoiler and enormous rear wing. Of that number, 110 were from 1973 and the remaining 57 were built from 1974 through late 1975. The collectability of the Batmobile lies not just in its rarity and beauty, but for the place it holds in BMW Motorsport history, taking the European Touring Car Championship in 1973, and every year from 1975 through 1979.

The rare example on offer is at the Werk Shop, an Illinois-based BMW specialist with a reputation for fastidious restorations and work on show-winning 2002-series vehicles. This 1975 3.0 CSL is number 49 of the 57 Batmobiles produced after 1973, of which about a third are believed to survive. Adding to its exclusivity is the fact that only four were painted by the factory in the rare Day-Glo Taiga color. Largely original and unrestored, this representative of the model is available for $350,000.