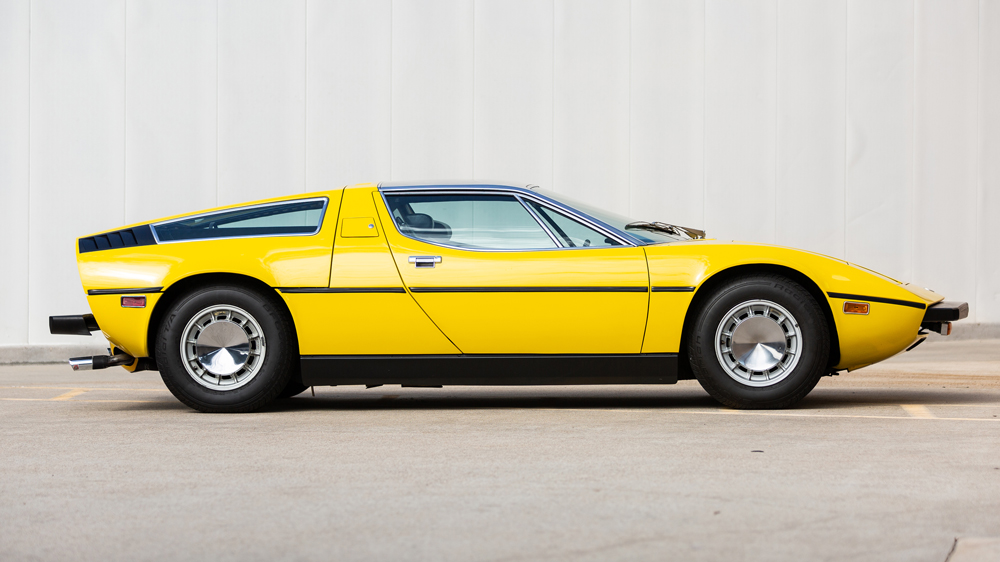 Ever since the 1963 Mistral, Maserati has—with few exceptions—named its cars after certain winds known throughout the world. Sometimes, the monikers are evocative and memorable, like Ghibli or Khamsin. Others have been more problematic, as exemplified when Maserati’s marketing types called its SUV concept the Kubang, after the Javanese wind. Thankfully, it was changed to Levante when that model finally went into production.

For collectors, no doubt the most significant Maserati production car since the original Ghibli (1967 though 1973) is the Bora, known internally as Tipo AM117, made from 1971 through 1978. After a Google search revealed the name is shared with a wind near the Adriatic Sea, then looking at the world globe in my office, I felt sufficiently equipped to delve into Maserati’s most ambitious road car of the 1970s, and maybe ever.

The Bora is important for a number of reasons, not the least of which is that it was Maserati’s first mid-engined production car. It was designed by Giorgetto Giugiaro, who, when at Ghia, penned the original Ghibli. He left Ghia in 1967 and founded Italdesign the same year, leading with the Bizzarrini Manta show car and soon bringing Maserati into his client portfolio.

The V-8-powered Bora and the Merak, its six-cylinder sibling that followed in 1972, were the models that anchored the marque to its sporting roots. The Bora concept was born in 1968, shortly after French marque Citroën took control of Maserati, which would be flipped to De Tomaso in 1975, subsequently to Fiat and is now under the aegis of corporate colossus Stellantis. But the decade spanning 1965 to 1975 was a fertile one for Italian carmakers, with Lamborghini, Ferrari, De Tomaso and Iso producing models as innovative as they were drop-dead gorgeous.

Maserati was determined to catch up, entering the fray with a truly modern design that debuted at the Geneva Auto Salon in March of 1971. The Bora was a sensation, and unlike any Maserati before, it ushered the marque into the modern age with features like independent suspension on all four corners, something no Maserati previously had, but Lamborghini employed on its very first model in 1964.

The Bora was Maserati’s first model to feature independent suspension on all four corners.  Photo by Juan Martinez, courtesy of RM Sotheby's.

The Bora’s steel body and beefy monocoque chassis make the model a heavy car, though its weight is somewhat mitigated by a drag coefficient of 0.30. The engine, positioned longitudinally and with a five-speed ZF transaxle behind it, is attached to a tubular-steel subframe joined to the monocoque chassis via four flexible mounts, improving ride comfort.

Inside, the driver and passenger recline in two elegant buckets more reminiscent of Corbusier’s iconic chaise lounge than automotive seating. And because Citroën cars have hydraulic fluid in their veins, the Bora’s disc brakes, pop-up headlights, pedal cluster, steering wheel and seats are all activated, adjusted, tilted or telescoped at the touch of a button. Sound insulation is addressed by double-paned bulkhead glass and a carpeted cover over the burly V-8 engine, which, along with the spare tire, is located behind the driver, making room for luggage space in the front trunk.

A steel body and beefy monocoque chassis make the Bora a heavy car, though its weight is mitigated by a 0.30 coefficient of drag.  Photo by Juan Martinez, courtesy of RM Sotheby's.

That engine was a masterpiece when introduced, every bit the match for powerful Ferrari flat-12s and Lamborghini V-12s of the day. Descended from the motorsport power plant developed for Maserati’s 450S race car, the engine in the Bora was initially offered in 4.7- and 4.9-liter variants. Production eventually switched to the 4.9-liter engine, developed to comply with US emissions requirements. With an aluminum block, four cams, 16 valves and a quartet of fat Weber carburetors, it makes about 330 hp and allows the car to reach 60 mph in less than 7 seconds. Claimed top speed at the time was anywhere from 170 mph to 178 mph, depending on whom one believed.

Along with the spare tire, the longitudinally mounted 4.9-liter V-8 engine is positioned behind the driver.  Photo by Juan Martinez, courtesy of RM Sotheby's.

The brushed stainless-steel roof and A pillars immediately set the Bora apart from its contemporaries, and after more than 50 years, its shape is as inspired and purposeful as it was in 1971. RM Sotheby’s will be presenting this US-market example at the auction house’s Fort Lauderdale sale from March 25 though 26. The vehicle was completed in May of 1975 and originally painted Rosso Fuoco, while black Connolly leather was featured inside.

This particular Bora was sold new by Maserati’s American distributorship in Englewood, N.J. While early ownership history is unknown, it was acquired by the consignor in 2015 from a collector in Texas. At some point during its previous stewardship, the car received a thorough restoration, including a respray in yellow and a fresh interior. Importantly, factory documentation confirms a numbers-matching engine.

A high watermark of Maserati engineering and Giugiaro design, Maserati’s Bora is unquestionably the most undervalued Italian hot rod from the 1970s. With an estimate of $180,000 to $220,000, this Bora will be offered with no reserve.