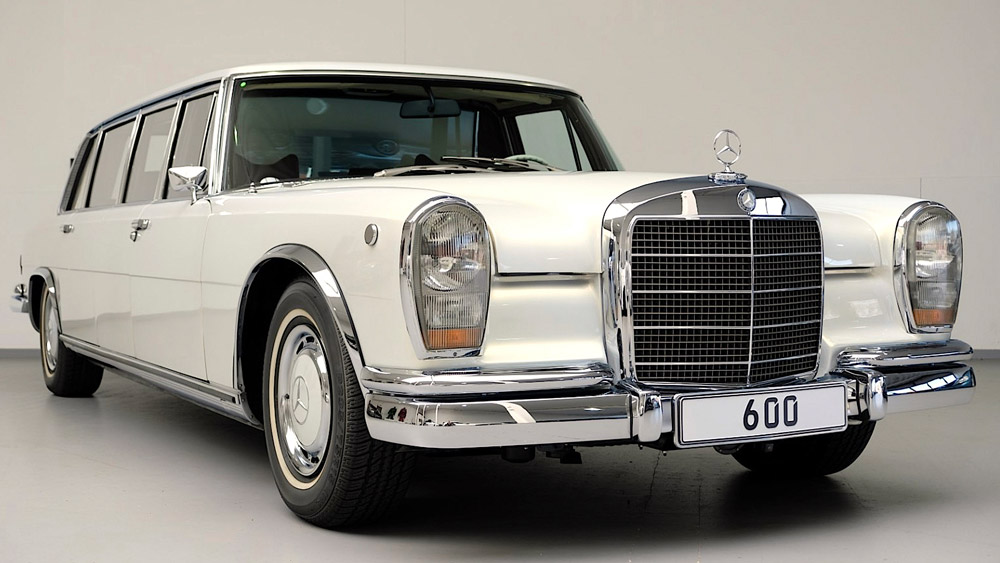 Back in 1975, anyone who was anyone—pop star, captain of industry, third-world dictator—got chauffeured around in a mighty Mercedes-Benz 600 Pullman. Notable owners included the famous, such as Elvis, John Lennon, David Bowie, Coco Chanel and Aristotle Onassis, to the infamous—Saddam Hussein, Idi Amin and Papa Doc Duvalier. Reportedly, Kim Jong-un still loves his.

Today, these 45-year-old money-pits, with complex self-leveling suspension, impossible-to-find spares and eye-watering restoration costs are usually guaranteed to end in tears for all but the fortunate few with a bank vault they can devote to the vehicle.

Best solution? To buy a car that’s been meticulously restored. Better still, buy one that’s had its sumptuous interior updated to take it to the level of luxury imbued by the modern-day Mercedes Maybach super-limos.

The 1975 Mercedes-Benz 600 Pullman being sold through AutoLeitner.  Photo: Courtesy of AutoLeitner.

One call to AutoLeitner, a Dutch exotic-car dealer in Alkmaar, northwest of Amsterdam, and this stunning mother-of-pearl-white example could be yours— providing you have the necessary $2.32 million asking price, of course. The dealership will even arrange shipping back to the U.S.

While the amount for the model might sound unusually steep, AutoLeitner’s owner, Douwe Leitner, says the Pullman was the subject of an exhaustive seven-year, $3.2 million restoration—between 2007 and 2014—at Mercedes-Benz Classic in Fellbach, Germany.

This Pullman underwent a seven-year restoration at a cost of $3.2 million.  Photo: Courtesy of AutoLeitner.

Leitner explains that while the owner was keen to retain the iconic exterior look of a the original 600—no wide-rimmed wheels and spoilers, thank you—he wanted it to have the interior comfort and over-the-top, private-jet luxury of a more contemporary Maybach, notably the stretched Maybach 62, built between 1997 and 2012.

Climb aboard, look up, and you’ll see the Maybach’s electro-transparent panoramic glass roof, which goes from clear to opaque at the flick of a switch. Same for the power-lifting glass partition between driver and rear passengers. Also mounted in the roof is a set of gorgeous Maybach analog gauges from the 62, showing speed, time and exterior temperature.

The Pullman’s quartet of rear-facing and forward-facing back passenger seats are all new and feature electric adjustment, heating and cooling. In addition, the seats are separated by mirror-varnished wood center consoles with built-in nav screens and deployable folding tables.

Need a little entertainment? Press a button and a TV screen levitates from the center partition. For tunes, there’s a Dolby surround sound audio system with Bluetooth connectivity.

According to Leitner, the owner resisted the temptation of going totally restomod and installing the latest Mercedes-AMG V-12. Instead, he had Mercedes Classic rebuild the original 250 hp, 6.3-liter, single-overhead cam V-8 and four-speed automatic transmission.

Other original features that have been retained include the lovely pleated-linen curtains for the rear windows, along with that iconic, white-rimmed steering wheel, Frisbee-sized instruments and a Becker Grand Prix AM/FM radio in the dash.

Of the 2,677 Mercedes 600s built, just 304 were Pullmans, adding to their increasing collectability. And you simply won’t find a better one than this.