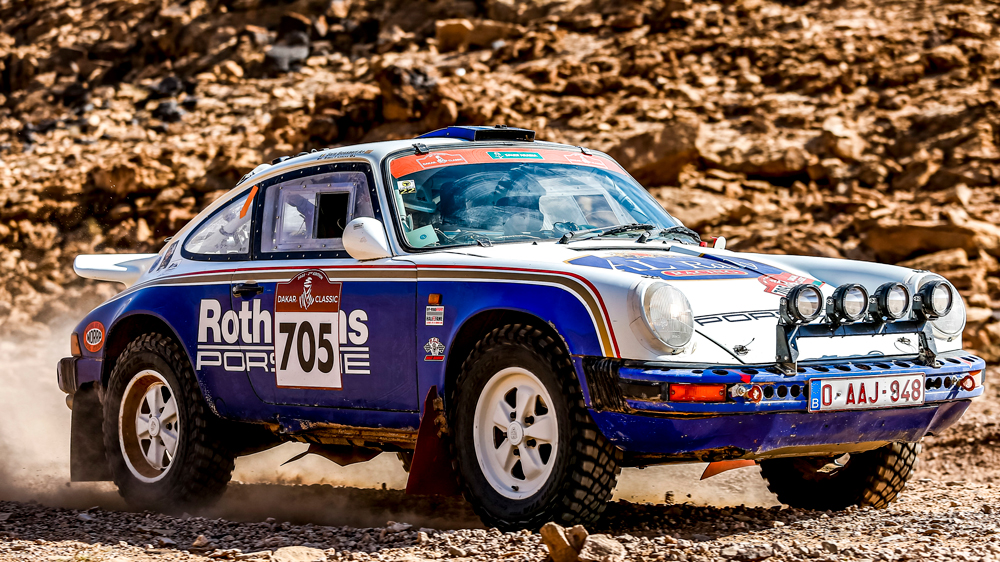 On May 13, Bonhams comes to Monaco with its Les Grandes Marques à Monaco auction at the Fairmont, Monte Carlo. The lots crossing the block will include a number of rare Bugattis, Ferraris and Porsches, among those a 959, 993 GT2 and 2016 911 R. But the most eye-catching Porsche is a 1982 911SC rally car wearing full Rothmans livery in tribute to Porsche’s winning entries in both the 1984 and ’86 editions of the renowned Paris-Dakar Rally.

Porsche and off-road competition go back to the 6,200-mile Paris-Dakar race of 1984, when the German marque entered three 953s (a highly modified 911 4×4), winning that race with René Metge behind the wheel. In the same competition, Jacky Ickx, who had won the 1983 Dakar for Mercedes-Benz, finished sixth in another 953. By 1986, the 953 was replaced by the 959, and Metge won the race once again.

The 1982 Porsche 911SC that competed in this year’s Dakar Classic will be offered through Bonhams.  Jose Mario Dias

The radical all-wheel-drive Porsches were equipped to conquer one of the most grueling courses in the history of motorsport. Traversing the European continent and onto the African continent, the cars and their drivers endured the harshest of conditions as they sped for the finish line in Dakar, Senegal. In 2008, the race moved to South America and stayed there until 2019. Since then, the contest, renamed “the Dakar Rally,” has been held in Saudi Arabia. Drawing its inspiration from the original, and happening on the same route as the modern Dakar, the Dakar Classic is a two-week event for vintage cars that challenges drivers, navigators and machines alike.

The car was later acquired by seasoned off-road racer Amy Lerner to compete in the 2021 Dakar Classic with the event’s only all-female team. The latter finished 15th overall and second in class. The Porsche and its team returned in 2022, ending 35th overall out of 142 teams. During that event, Jacky Ickx autographed the hood at the Dakar bivouac, a fitting tribute for any desert-driving Porsche.

On what it was like running her 911SC in the Dakar Classic, Lerner says, “I was completely unprepared for the outpouring of love and joy for the Rothmans tribute livery. The factory team of the mid ’80s was a thing of legend for so many people. It was a joy to drive the Porsche the way it should be driven, and particularly fun as we repeatedly zipped past multiple 4WD SUVs stuck in the sand. As the French would say, ‘C’est le Dakar.’”

In the 2021 Dakar Classic, Amy Lerner and her all-female team fished 15th overall and second in class with the car.  Vinicius Branca

Lerner’s passion for all-terrain competition is evident in her recently released film One More Win. The documentary, which Lerner co-directed, follows 80-year-old race legend Rod Hall’s 50th consecutive Baja 1000 competition in 2017. At his death in 2019, Hall, from whom Lerner gained her off-road chops, had the most desert-race wins of any driver in history.

This Porsche is offered fresh from its post-event service and is complete with a three-page list of spares and numerous certifications, making it a desirable entrant to events like the Dakar Classic and East African Safari Classic. Impressively, it’s being offered at no reserve, though it’s estimated to fetch as much as $237,000.