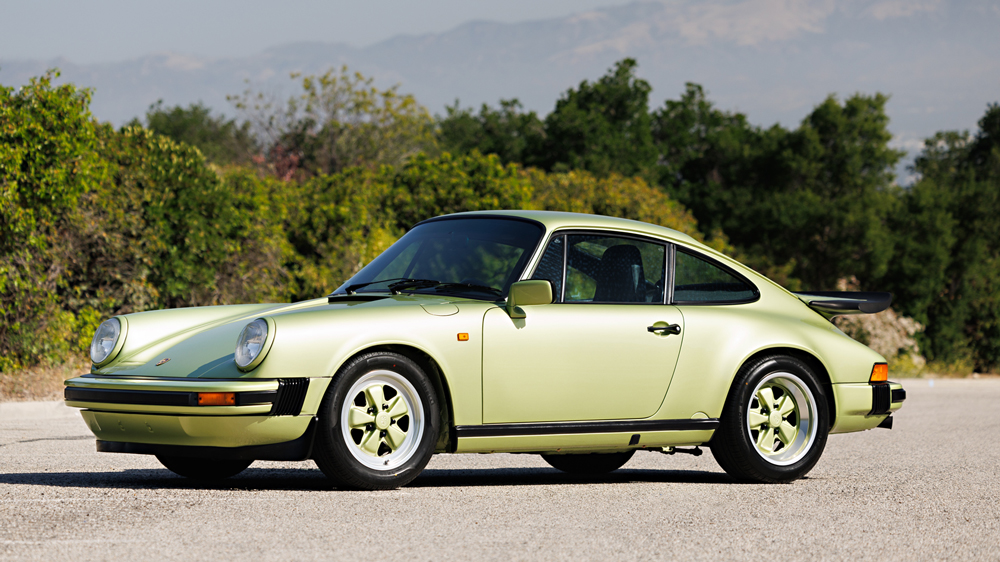 From a distance, a Porsche 911 is like a penguin. All penguins look more or less alike, indistinguishable except to each particular penguin’s mate or mother. Similarly, Porsche’s familiar 911 shape blends in with others of its kind, and telling them apart is especially confusing to folks for whom “911” is not a religion. That’s because during the nearly 60-year life of the German marque’s iconic model, many hundreds of variants have emerged, each identified by series, year and specifications that weave a genealogy as complicated as Adam’s family tree.

Porsche customers seeking a hardcore, stripped-down 911 in the spirit of the original 1973 Carrera RS had been waiting for more than a decade when Porsche finally offered the Club Sport. Launched at the Frankfurt Motor Show in September of 1987, it was shown with the rest of Porsche’s 1988 model-year lineup. Available only in coupe form, it was a legitimate successor to the original RS, if a bit more civilized.

Only 340 examples of the Club Sport (option code M637) were built from 1987 to 1989. Most were painted Grand Prix White. A few other colors occasionally slipped through, and among those, a sole Club Sport was finished in metallic Paint-to-Sample (PTS) Linden Green, a color introduced by the factory in 1972. The Porsche community is rabid for PTS cars, and rare colors invariably bring a premium in the marketplace. Combining the M637 option with the Linden Green paint scheme makes this 1989 Club Sport a one-off among 911s, and it will soon be available through Gooding & Company at its annual Pebble Beach auction on August 19 and 20.

Porsche claimed an output of 214 hp for the Club Sport’s 3.2-liter flat-six engine, though it actually developed more like 240 hp.  Brian Henniker, courtesy of Gooding & Company.

Porsche connoisseurs obsessed with details appreciate the differences between the 911 Carrera Club Sport and a “civilian” Carrera. With the Club Sport, weight was conserved at every turn, and so the CS wears minimal PVC underseal. Consequently, Porsche’s good-faith, ten-year anti-corrosion warranty was reduced to just two years. Bilstein shocks, optionally available on the Carrera, came standard, along with ventilated disc brakes and an 80-liter (21.1-gallon) fuel tank. And the spare wheel was aluminum instead of steel. The 911’s beautiful Fuchs forged alloy wheels were painted body color by the factory on this example.

Officially, the Club Sport engine is identical to that of other European-spec Carreras, but it uses hollow intake valves, a modified air intake and re-mapped engine management that allows revs to reach 6,850 rpm. The Getrag G50 gearbox has taller ratios in fourth and fifth gears, while a single-plate clutch and a limited-slip differential, optional on the 911 Carrera, were also standard. Though the factory claimed 214 hp, Club Sport engines developed more like 240 hp. The CS was plenty quick for its time, firing off zero-to-62 mph in about 5.4 seconds—only bettered by the 911 Turbo—while its top speed is 156 mph.

The interior of this CS is a minimalist’s delight, judiciously lightened at the factory by deleting the rear seats, most of the sound insulation and even lightening the wiring loom, since luxuries like power windows, central locking and a radio were deleted, as were the lights for the engine lid and luggage compartment.

Because ounces add up to pounds, armrests and the passenger’s sun visor went missing. After its starvation diet, the car officially weighs in about 150 pounds lighter than the standard 911 Carrera. Notably, the CS models were equipped with Sports seats, most of which featured snazzy upholstery in black pinstripe fabric with red piping. This Linden Green Club Sport was ordered with Porsche’s “Celebration” two-tone cloth upholstery in black and gray, a time-capsule fashion statement, and unrepeatable today.

Built for the German market, this car later went to Japanese and Belgian collections before being imported into the US by the current owner. With 47,758 km (29,675 miles) on the odometer, and supplied with books, tools, a spare, accessories and Porsche COA and documentation, this unicorn Club Sport is expected to fetch as much as $500,000.