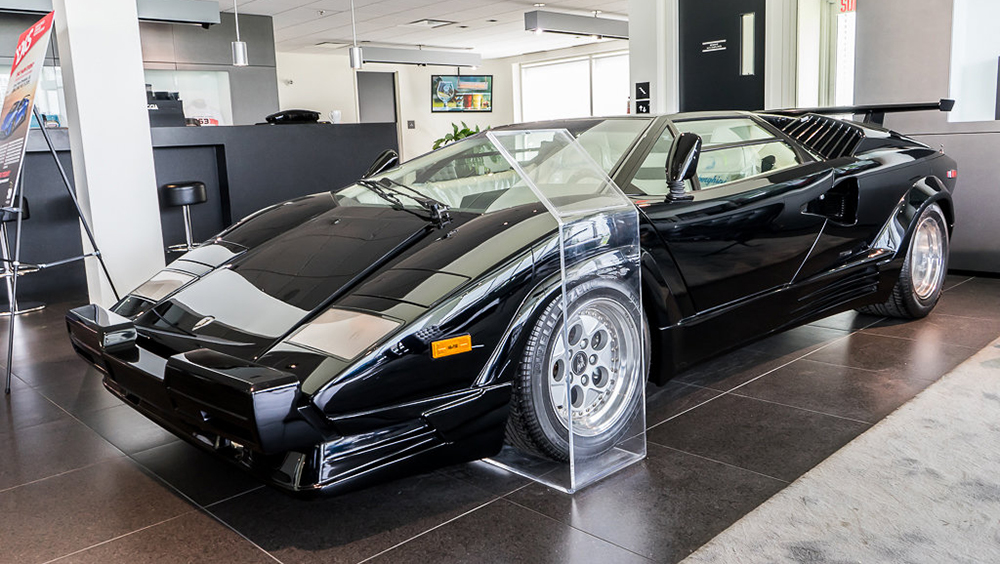 Few supercars inspire more passion than the Lamborghini Countach. And for collectors who’ve always coveted one of their own, we bring good news: A pristine example of one of the car’s most desirable editions is now up for sale.

Lamborghini Montréal has just listed a stunning black 1990 Countach 25th Anniversary coupé for sale on its website. And when we say it’s pristine, that’s no hyperbole. The car somehow only has 83 miles on its odometer.

First introduced in 1974, the rear-wheel-drive Countach is the vehicle most responsible for popularizing the “Italian Wedge” style of supercar design. This specific version, which was styled by Horatio Pagani, was produced from 1988 to 1990, and was meant to celebrate Lamborghini’s first quarter century in business. The redesign had its critics at the time, but for many people it’s gone on to become one of the defining models of one of the vehicle.

This particular model is listed as being in “brand new” condition by the dealership, and based on the photos included with the listing, its hard to argue with that. The gorgeous Nero black speedster looks untouched, even featuring plastic wrap, stamped with the Lamborghini logo, covering its cream-white interior. From its glossy paint to its instrument panels to the alloy wheels, the car looks as if it just rolled of the line then was transported 30 years into the future.

Of course, no pictures are provided of the car’s one real question mark—its 5.2-liter V-12 engine. Mated to a manual transmission, that mill was able to produce 449 hp and 360 lb-ft of torque when new. But, as The Drive points out, that’s unlikely to be the case now, after three decades spent parked. That’s an awful lot of time for seals and other components to degrade and rot. Because of that, it’s unclear whether this car can be more than a museum piece.

Regardless, it’s exceedingly rare to find a Countach in as good condition as this specific example. If you want to take a chance on the supercar, or wouldn’t mind just having it on display in your collection, the dealership is asking $799,900 CAD (about $567,000 USD) for the beauty.