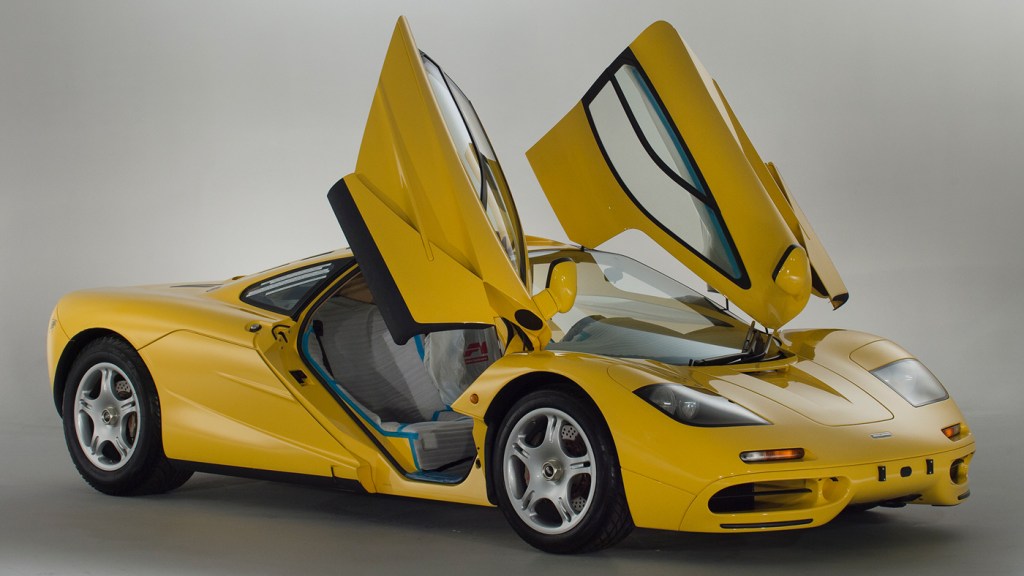 In the film Back to the Future, a DeLorean was given a sci-fi makeover in order to take its passengers back in time. But a McLaren F1 supercar, currently for sale in England, has the power to actually reel in the years.

Built in 1997, chassis No. SA9AB5AC1T1048060 was delivered new to its Japanese owner and…that’s it. There, the Dandelion Yellow over Grey Alcantara beast lay dormant for 20 years, cocooned in all its protective factory coatings and dressings, with not a meter added to its 239 kilometers (149 miles) of driving history—all from factory testing. Now the car is for sale through Tom Hartley Jnr, a Derbyshire-based rare car dealership that is presenting one lucky collector with the opportunity to essentially pretend they’re taking fresh delivery of what was — and many feel still remains — one of the greatest achievements in automotive engineering.

Price for this coupe, a bona fide time capsule, is upon request. But one can speculate. When the McLaren F1 landed from another automotive planet in 1992, the Formula 1-derived masterpiece—conjured up by Ron Dennis and Gordon Murray—cost $815,000. In August of this year, Bonhams sold a 1995 F1, with a comparatively gluttonous 9,600 miles on the odometer, for $15.6 million. Can $20 million be a stretch for this pristine machine? Tom Hartley Jr. predicts that younger collectors will soon push F1 prices into Ferrari GTO turf, or around $40 million.

“When you consider [the F1’s] rarity, with only 64 road cars produced, and the fact that the younger generations desire one of these more than, say, a Ferrari 250 GTO, I have no doubt that it’ll overtake a GTO in value one day,” says Hartley, adding that meeting with this F1’s owner made him realize that it was being treated like a work of art. “I think the car will be bought by someone who wasn’t in a position to buy one when it was first introduced, and now is happy to pay the premium for the only new example left.”

Listing all of the F1’s attributes would take pages, but suffice to say the vehicle pioneered the production car use of carbon fiber as a material to build a rigid chassis. Its three-seat design, with the driver mounted central and forward, also was a unique way to telegraph the F1’s racing-inspired monoposto roots. Above all, it boasted a BMW-made 6.1-liter V-12 good for 627 hp and was capable of rocketing the car to a shocking 243 mph.

The car carries a 627 hp V-12 and the capability of reaching a top speed of 243 mph.  Photo: Courtesy Tom Hartley Jnr.

McLaren of course has gone on to cement itself in the realm of specialized sports cars, offering fans everything from reasonably affordable examples of its high-tech craft (cue the 570S at $188,000) to its state-of-the-art supercar (spotlight on the P1 GTR at around $4 million). But if you really want to go for broke, a certain yellow 1997 F1 is calling your name.