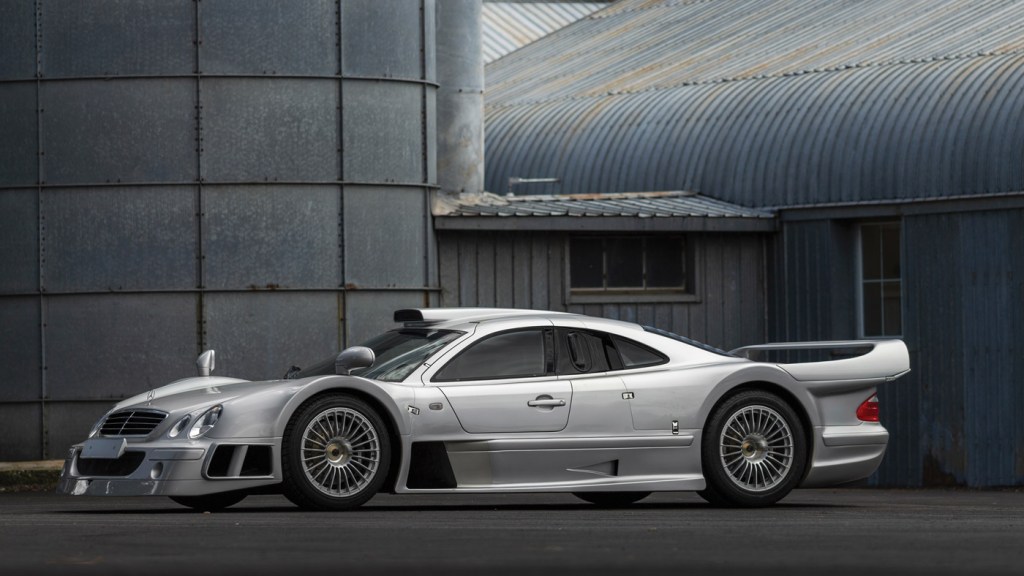 In 1997, Mercedes-Benz unveiled the CLK, a coupe and convertible two-door, four-passenger cocoon for the masses. Today, a nice used one will usually set you back less than $10,000. But RM Sotheby’s has just added another gem to its upcoming Monterey auction—a 1998 Mercedes-Benz CLK. And they’re asking around $5 million (estimated value of $4.25 million and $5.25 million). What gives? Well, it’s all down to the three other letters that follow this CLK: GTR.

Put bluntly, the standard CLK is to the CLK GTR what a grade-school hoops star is to the Golden State Warriors’ Steph Curry. Based on the full-race version of the CLK GTR built by Mercedes to compete in the wildly competitive FIA GT1 championships of the 1990s, this road-going version of the GTR—number nine of only 25 built—boasts all of the visual and aural insanity of its track-bound sibling.

Packing a 6.9-liter, 600 hp V-12 under the hood, and featuring bodywork that redefines such an oh-so-mean machine, this silver arrow weighs just over 3,000 pounds and features a then-innovative sequential paddle shift gearbox. Zero to 100 mph comes in around six seconds, while top speed is estimated at 214 mph.

The Mercedes-Benz CLK GTR on offer is one of only 25 examples built.  Photo by Patrick Ernzen, courtesy RM Sotheby's.

Add to those stats the fact that serial No. 09/25 is thought to be one of only four similar cars currently in the United States—this example recently underwent the required DOT tweaks to be street legal here—and you start to understand why RM Sotheby’s specialist Alexander Weaver thinks this automotive prize could be a steal at its estimate: $4.25 million to $5.2 million.

“This car is in the pantheon of three greats of its day, along with the McLaren F1 and the Porsche GT1; three cars that today would be represented maybe by the [Porsche] 918, the [McLaren] P1 and the [Ferrari] LaFerrari,” says Alexander. “So, if you look at those first three, a solid F1 is around $20 million and a GT1 is $10 million to $12 million. So, somewhere around $5 million for a GTR seems like a hell of a bargain.”

Weaver has spent a little time driving two examples of the GTR—one belonging to a friend and this one. He says that apart from the wildly low ride height, which translates to challenging driver ingress and egress, the car defies description.

“The sounds that it makes are amazing—the torque it makes, the sound coming out of its gearbox (which reminds you of a Ferrari F50), all that makes you think, in the end, there were very few compromises made between the race version of the GTR and this street version,” he says. “The visceral experience of the GTR can’t be matched.”

Weaver says that determining the right price for the car was difficult only because the last time a GTR sold in the U.S., back in 2012, it went for $1.1 million. But, he says, enthusiasts so far haven’t balked at the current estimate when querying about this GTR, which has fewer than 1,000 miles on the odometer.

“I know everyone’s waiting for the upcoming Project One,” the Mercedes-AMG hypercar in the works, says Weaver. “It will no doubt be amazing. But this GTR was a true flagship in its day, and you could argue that the company hasn’t really made a flagship car quite like this one since.”