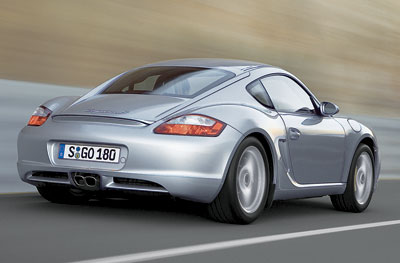 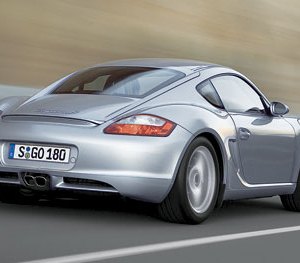 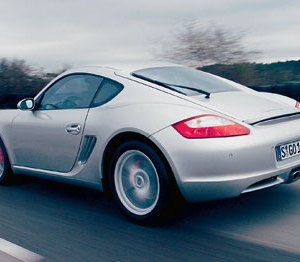 When the new Porsche Cayman S arrives in showrooms in the spring of 2006, it may look familiar; it will share front fenders, hood, doors, headlights, and taillights with the Boxster convertible. But while the two may have some physical similarities, as any two family members would, they will not be mistaken for twins. Most notable among the divergent traits will be the Cayman’s permanent steel roof, an adaptation that provides it with more than twice the rigidity of the topless Boxster S.

Rather than affix a permanent roof on the Boxster and call it a day, Porsche took its time—nine years in all—to develop a $60,000 (base price) car that justifies the $6,000 premium it will command over the convertible Boxster. The first notable piece of superior equipment is the engine, a 3.4-liter flat six that splits the disparity between the 3.2-liter in the Boxster S and the 3.6-liter in the 911. The Cayman’s engine develops 295 hp, or 15 hp more than the Boxster S and 30 hp less than the Carrera. According to manufacturer claims, the Cayman coupe will beat the Boxster to 60 mph by a nose, scampering to speed in 5.1 seconds, as opposed to 5.2. Equipped with the 6-speed manual transmission, its top pace will be 171 mph—or 4 mph faster than the Boxster S, and 101 mph beyond the legal limits of the California highway system.

Porsche did not design this car for lazy Sunday driving. The Cayman S is a car you tow to the track with your Cayenne Turbo. A stability system is standard. Forgo the Tiptronic: It will cost you a couple tenths of a second on the way to 60 mph. Ceramic brakes ($8,000 options) are recommended for track use. Racers also will want to opt for Porsche’s Active Suspension Management, which, by lowering the ride height 10 mm and adding continuously adjustable dampers, promises to improve driving stability—either on the track or when those posted legal limits are interpreted as only suggestions.