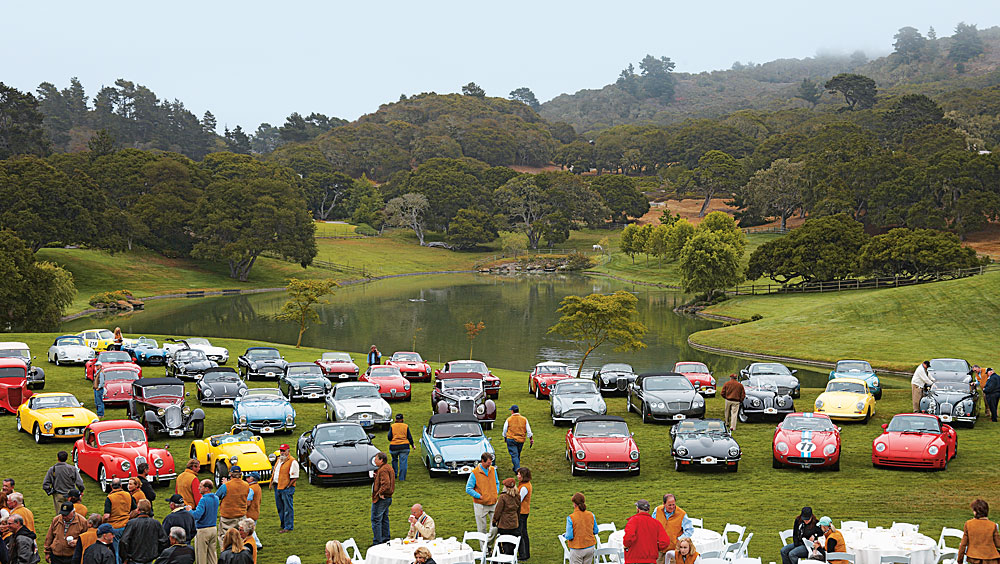 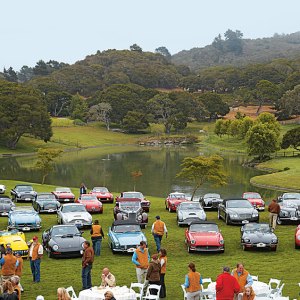 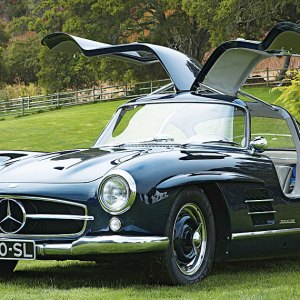 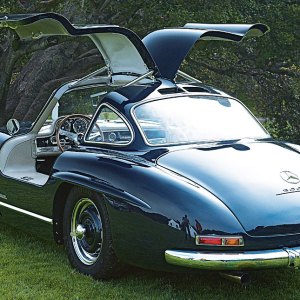 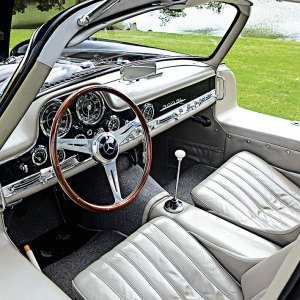 A small league of automobile purists waits all year to convene at Quail Lodge in Monterey County’s Carmel Valley for the annual Quail Rally. Then, for three exalted days each August, these 30 collectors—many of them loyal Robb Report readers—hurtle through the morning mist along some of California’s most sinuous roads, piloting cars that have stolen their hearts.

In the following pages, we spotlight nine vehicles from the 2008 gathering. These machines embody the true spirit of the rally, which Sir Michael Kadoorie, chairman of the Hongkong and Shanghai Hotels group, conceived in 1997 as a private fete for a few friends and their favorite cars. Now it is an invitation-only event that requires a registration fee of $2,800 per car.

Mathias Doutreleau, who oversees the rally in his capacity as director of events for Quail Lodge, notes that each year the requests to participate far outnumber the available slots. His advice: Try and try again. “It’s worth the wait,” he says.

The Gullwing’s legendary doors were born of necessity, specifically of the need to accommodate a body that required high sills to be sufficiently rigid for racing. But what an inspired solution they were. Other marques have devised doors that arch skyward, but not one has designed something that matches the grand winged look of the Mercedes-Benz 300SL.

Sightings of these unusual automobiles are increasingly rare as the market value for Gullwings continues to increase; few owners want to risk accidents or theft. However, Craig Ekberg is not afraid to drive his 1955 model regularly. He has driven 60,000 miles in his Gullwing since purchasing it a decade ago. “We’ve vintage-raced it at Monterey three or four years in a row, and it has been on the Copperstate two or three times,” Ekberg says.

This proud owner has restored the mechanicals, but the rest of the car remains original, from its exterior paint to its Rudge-knockoff wheels. “This car pretty much beat everything in the ’50s,” he says, “and it’s competitive with cars from the 1960s, like Ferrari 250s.”

Tom Malloy’s yellow 1953 Kurtis 500S looked and sounded like an angry hornet as it tore through the Quail Rally at a pace hindered only by the speed limit and common sense. “This car hauls, doesn’t it?” he asked, not waiting for an answer over the growl of his race-ready car’s heavy engine. “There’s nothing quite like it.”

The 500S was one of designer Frank Kurtis’ most powerful automotive statements, a sports car that could comfortably exceed 135 mph. Kurtis built roughly 50 500S cars, some of which—including Malloy’s—featured aluminum bodies; others were fiberglass.

Malloy’s car has enjoyed some racing success with Southern California’s Frank McGurk behind the wheel, mostly on the region’s airport-strip circuits. “McGurk was from Inglewood, [Calif.,] which is where I grew up,” Malloy says, “and the thought of having a great car like this that had been driven by someone from my hometown was too compelling.”

In blazing yellow, Chip Connor’s 1962 Ferrari 250 GT SWB kick-starts the heart. This ferocious machine, which Monterey Historics founder Steve Earle bought new in 1962, is one of the last steel-?bodied, short-wheelbase Berlinettas that Ferrari produced. Pinin Farina designed the car’s body, and Italian coachbuilder Scaflietti constructed it. The 250 GT’s expansive engine bay houses a 275 hp V-12 and can still accommodate the many hands needed to make a quick mid-race repair. But far from being just a giant racing engine with wheels, this vehicle is passenger-friendly and offers a spacious interior perfect for back-road touring.

According to Connor, Ken Rupp, the car’s previous owner, hired Motion Products, a well-regarded Wisconsin firm, to restore it to show quality. “Ken showed it at both the Amelia Island and Pebble Beach concourses,” Connor says. “I purchased this Ferrari because it was one of the finest examples I had ever seen of a car that defined both sports racing and grand touring in the postwar era.”

Not long after Roger Morrison sold his first 1966 Ford Shelby Mustang GT350, he began feeling seller’s remorse. “I knew I had made a mistake,” he says with a faint chuckle. “I felt sad and stupid. Then I got down to business.”

He began the hunt for another GT350, a muscle car whose racing brethren claimed top-class honors in Sports Car Club of America contests throughout the late 1960s. The car he eventually acquired is candy-apple red, a rare and exotic departure from the many white models offered in 1965. Its options include Krager/Shelby five-spoke wheels and a special-edition steering wheel.

Morrison insists that he will never make the mistake of selling this GT350. “I have a lot of cars, but this is among my favorites,” he says. “I love the Walter Mitty aspect of owning the car—on racetracks, this thing just beats up on everyone. I love the sound of it, I love running it through the gears, and I love the work of [designer] Carroll Shelby.”

The GT350 pleasantly surprised Morrison during the rally. Its straight-line prowess was a given, but the car demonstrated enough corner-hugging capacity to make Monterey County’s twisty lanes a pleasure to navigate. “It held the road much better than I anticipated,” he says. “But then, with all that power, you still can hang the tail out any time you want.”

The Delage D8-120 Chapron Cabriolet was a beast of an automobile “that turned out to be just about the most elegant of all Delages,” says owner Peter Mullin, a noted collector of French automobiles. “It was beautifully styled, had great handling, was lightweight and ever-reliable. Company founder Louis Delage liked to say, ‘Gentlemen drive Alfas, and you’re driven in a Rolls. But a Delage is something to give one’s mistress.’ “

Mullin purchased this sleek beauty almost 20 years ago after being seduced by the car and its story. After appearing in the 1951 movie An American in Paris, the Delage spent the next few years collecting dust on the RKO back lot. Eventually an RKO employee approached studio owner Howard Hughes with a proposition: the Delage in exchange for his retirement package. “That guy kept it in Arizona until I bought it,” says Mullin. “I just couldn’t resist that story.”

For Mullin, the car’s most compelling attributes include a comfortable ride and impressively agile steering. “It also has a stick on the floor that instantly transfers you from forward to reverse, meaning you have the same four speeds for backing up,” he says, laughing. “Why you would want that, I don’t know, but it’s there.”

Arturo Keller has a keen eye for German cars, as evinced by the number of awards that his collection of pristine prewar Mercedes-Benzes has won at the Pebble Beach Concours d’Elegance. But for the 2008 Quail Rally, Keller went Italian, driving a 1933 Alfa Romeo 8C 2300 Cabriolet with a body by the coachbuilder Castagna. “This car would almost certainly have been styled at the drawing board of Emilio Castagna himself, who headed the company’s design team until 1933,” says Keller, a noted vintner whose Keller Estate Pinot Noirs and Chardonnays were among the wines served at Quail Rally’s lunches and dinners.

An unidentified Czechoslovakian owned the car for many years. In 1969 a Swiss collector acquired the Alfa, keeping it in Switzerland for many years before returning it to Italy for restoration. Today the mint-condition classic adds a bit of Italian zest to Keller’s mostly German collection. “It’s a wonderful car to drive in a rally for many reasons,” Keller says. “It’s light and powerful, and it functions as either a closed- or open-top car. On the practical side, it has a backseat that can accommodate luggage. Mostly, though, it’s a beautiful car that says, ‘Wow.’ ?”

The 1961 Alfa Romeo Giulietta SZ (for “Sprint Zagato”) arrived at a time when American cars with massive frames were hogging the road. In contrast, the diminutive Alfa, powered by a modest 1,290 cc engine, seemed like a product of another time, if not another galaxy. The SZ was a four-wheeled rocket that rendered even the handsome standard-?version Giulietta dull by comparison. “It’s very light, with Plexiglas all around and a thin aluminum skin,” says owner David Sydorick.

Sydorick became interested in the SZ upon reading a European auto-magazine story in which the renowned collector Miles Collier raved about the car. Collier was particularly smitten with the SZ’s rally capabilities. “I agree with Miles 100 percent,” says Sydorick, praising the Alfa’s brisk five-speed transmission and noting how easily the car handles when it is cruising at 80 mph. “It’s very tight, very short, and very light.”

SZs were rare in the 1960s, and they are even rarer now. However, Sydorick says the car’s influence is apparent in at least one relatively common contemporary car: “Freeman Thomas told me his inspiration in designing the back of the [Audi] TT was the SZ.”

Any Aston Martin built between 1947 and 1972—the years that Sir David Brown ran the company—can cause a minor traffic jam as passersby inevitably pause to ogle the elegant, powerful car. But for Sir Michael Kadoorie, one particular Aston Martin—a DB4 GT—is more exceptional than the rest. “My father was the first importer of Aston Martins to Hong Kong, and he had been looking for a new model when I specced this out for him and insisted that he go for the special GT model with the spare Borrani wheel and a 298 hp triple-Weber engine,” he says. As the story goes, Kadoorie’s father grew weary of the withering heat to which the car subjected its passengers. “So he offered to sell it to me,” says Kadoorie, who installed an air conditioner after taking possession of the vehicle.

Four decades have passed since that intrafamily transfer, and the DB4’s steel-gray Superleggera exterior remains pristine. “It’s truly a magnificent sports car, a model that people like [racecar driver] Stirling Moss won with in its day,” Kadoorie says. “Now, it being a classic, I’m much less the owner than I am the caretaker.”

Kadoorie says he might pass the car on to his teenage son, who rode with him during the Quail Rally. “I hope he will take the same interest in the Aston,” he says. “Driving with him reminded me of driving in this car with my own father.”

Every supercar has its day. The Lamborghini Countach was letter-perfect for the outré 1970s, while the ’80s belonged to the 959, Porsche’s high-tech flight of fancy. Porsche built only approximately 230 959s before it ended production in 1988, but the car is once again a rip-roaring machine for the times, thanks largely to ex-racer Bruce Canepa. His firm, Canepa Design, in Scotts Valley, Calif., specializes in tweaking 959s to make them quicker and more agile. “We take the raw car and essentially do all the R&D that would have gone into refining it had Porsche had the money back in the day,” explains Canepa, who drove a red 959 in the 2008 installment of the Quail Rally.

Canepa re-engineers the 959 so that it sprints from zero to 60 mph in approximately three seconds and offers impeccable four-wheel-drive manners. Twenty years after its production run ended, the 959 lives on as a benchmark of automotive quality. “It was the ultimate car in its day,” Canepa says, “and it still is.”