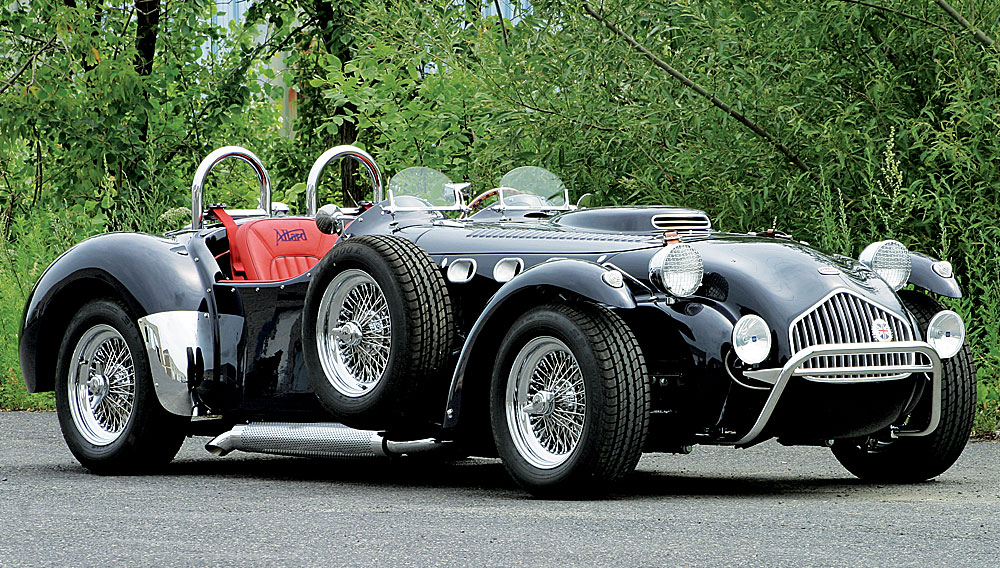 The Allard J2X MkII revives a racer that offered the best of both worlds.

In modern automotive parlance, the word hybrid conjures up visions of the ubiquitous econobox wobbling smugly in a carpool lane. But for car enthusiasts, the term recalls the first time a large American engine found its way into a light, nimble European chassis. In 1949—more than a decade before Carroll Shelby shoehorned Ford’s small-block V-8 into a British AC roadster—Sydney Allard created the now-legendary Allard J2. The hair-shirt, cycle-fendered sports racer was followed in 1951 by the improved J2X, which was powered by Cadillac’s lightweight V-8 or Chrysler’s OHV Hemi.

The J2X was successful on American circuits and abroad, piloted by such luminaries as Shelby and Masten Gregory. Allard built only 83 examples of the car before ceasing operations in 1959. But enthusiasts’ passion for the marque has not diminished since. One such enthusiast, Roger Allard (no relation to Sydney), acquired the trademark a decade ago and is now bringing the J2X back to life as the Allard J2X MkII.

The new car’s body design is built to the outward specifications of the original, but the current incarnation has a 6-inch-longer wheelbase to allow for greater interior space. Suspension is independent front and rear, with Wilwood four-piston disc brakes and Dayton 72-spoke alloy wire wheels. Weight is a svelte 2,750 pounds at an ideal 50/50 weight distribution.

Svelte is the operative word with the J2X MkII, considering its power-to-weight ratio. Standard in the new roadster is a 350 cu in GM V-8, but for a taste of excitement, the Chrysler 5.7- and 6.1-liter Hemi V-8s are hard options to resist. A 600 hp Allard—unthinkable during the ’50s—is an enticing reality today. A Tremec 5-speed manual transmission with overdrive is standard, while a 4-speed automatic transmission is an option for true loafers.

The buyer who commissions a born-again Allard selects a third-party engine builder/supplier from among those approved by Allard Motor Works, which began deliveries of the J2X MkII (priced from $138,000) last fall. The Montreal-based company, which recently established a dealership in Southern California called Allard West, will begin offering a ragtop version in the spring.