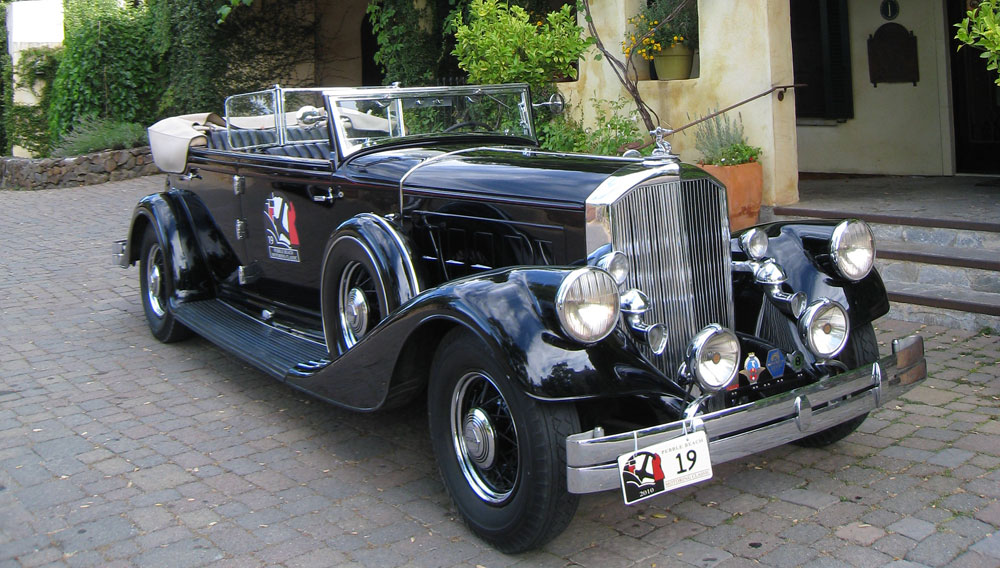 The stylish way to travel to the Pebble Beach Concours d’Elegance is in a vintage automobile, and if your ride happens to be over 100 years old then it’s even more fun.

Some people may say you’re crazy to drive 1,600 miles in a vintage car, but I think, if you have a suitable vehicle, you’re crazy if you don’t use it. Take your time, travel on scenic back roads, and stay overnight in historic places. The 10-day, Sixth Annual Pebble Beach Motoring Classic lets you do that and more – and it starts and ends with a party. Robb Report went along for the ride.

As the former director of the Petersen Automotive Museum, I’m no stranger to old cars, so I couldn’t pass up the opportunity to try several very different models. Our drive route, principally on older backroads, was perfect for this purpose. From Seattle, we headed south toward Mount Rainier then we passed Mt. St. Helens, where damage from its 1980 eruption can still be seen. Next, we cruised the Columbia River Highway, on a road built by 19th-century capitalist Sam Hill. After lunch at the historic Columbia Gorge Hotel in Oregon, we climbed to the magnificent Depression-era, hand-hewn Timberline Lodge, more than 6,000 feet high, on the slopes of Mt. Hood. As old as many of our cars, crafted in a way that could never be duplicated today, its natural beauty still charms travelers.

Arturo and Deborah Keller’s 1902 28-horsepower Mercedes Simplex Tourer, notably the world’s oldest surviving Mercedes, often led the way. To ensure success, the Kellers brought along a talented crew of mechanics, led by the car’s restorer, John Bentley. While some took bets the venerable, wood-bodied Merc wouldn’t even make it to Oregon, it sounded strong, and I was sure it would go the distance.

The newest “old” car was a Giallo Fly 1967 Ferrari 275 GTB/4 NART Spyder owned by Jon and Mary Shirley of Medina, Washington. On a long trip, you really get to know fellow road warriors, swap cars occasionally, and discover if your mount can go the distance. The 1902 Mercedes needed some mechanical work done nearly every evening; the Kershaw’s were plagued with a faulty generator; and tour director Al McEwan’s 3½-liter Bentley by Vanden Plas developed an errant ignition miss. But they all rolled on.

Al and his wife, Sandy, look after every detail: Participants never have to think about anything but the drive. “We have a lot of ecosystems in the Pacific Northwest,” said McEwan, “from glacial mountains to alpine high deserts, redwood forests and magnificent seashores. We want everyone to experience them all.” On a memorable evening, we boarded a 40-passenger open hydrofoil at Jot’s Resort in Gold Beach, Oregon, and zoomed up the unspoiled Rogue River, spotting eagles, ospreys, deer, and bears. Ken Waldrip, a retired Northwest Airlines captain, and his wife, Sami, looked after the luggage. The irony of an ex-pilot handling baggage isn’t lost on these travelers. But it’s hard to tell who’s having more fun. “We still get Christmas cards from people we’ve met on the tour,” said Waldrip. “These cars are impressive, to be sure, but the owners are all just the nicest people.”

“We don’t stay in five-star hotels every night,” added McEwan. “They’re not always on the tour route. And our guests don’t expect it.” That said, our overnight stay at the splendid 1880’s Carter Inn in Eureka, California, (an old redwood town that has more preserved Victorian buildings than any city in the United States), let us relive, if only for one night, a bygone era when lavishly decorated and skillfully crafted buildings like these were commonplace. In a region famed for its redwood timber, the gingerbread houses remain a lasting expression of custom craftsmanship, like the bespoke cars on the Motoring Classic.

Time and again, spectators drove alongside snapping cell-phone-camera pictures. Onlookers waved, cheered, and crowded around the dusty mounts at day’s end. I didn’t bring an old car, so Bentley Motors kindly loaned me a new Flying Spur saloon. It’s a superb modern car, but I’ll confess, I enjoyed the driving the older cars just as much.

Frank and Rob Miller encouraged me to try their 1915 Rolls-Royce Silver Ghost Tourer. Billed as “the best car in the world” before World War I, and despite having only 45-to-50- horsepower the Ghost’s 7.4-liter six develops prodigious torque, encourages shifts into fourth gear below 20 mph, and runs like a train up the steepest hills with no downshifting required. The Ghost’s unsynchronized crash box demands careful matching of engine revs with shifts to prevent clashing gears. Its surprisingly quick steering, hardy—if a bit tardy—two-wheel rear brakes, and right-hand drive require concentration, but this 95-year-old keeps up with modern traffic.

In contrast, Steve and Annie Norman’s Type 44 Bugatti Roadster has its throttle pedal positioned in between the brake and clutch pedals, like prewar Bugatti and Alfa Romeo Grand Prix cars. One false move and you’ll accelerate headlong into the car ahead. The Bug’s 2.3-liter, SOHC straight 8, with twin SU’s replacing its original single Zenith carburetor, and benefiting from higher compression and a fresh tune by Ivan Zaremba and Phil Reilly, snarled gleefully as I drove it, tracked like a go-cart, and stopped on a franc, despite cable-operated brakes. Luckily, I never once mistook the center throttle for the brake pedal.

Buck Kamphausen’s J-12 Hispano-Suiza boasts a huge, 11.3-liter, slow-revving V-12, and lazy steering. First gear is good for speeds of more than 60 mph, but it’s content to idle along in third. Peering through a low windshield, looking out at a long hood capped by a flying stork, you appreciate why the chauffeurs of yore preferred to shift to high gear as soon as possible—so as not to disturb their passengers. Custom-bodied by Kellner to be the 1935 Paris Show car, this Hispano is a pillarless body design. Although its wood framing creaks, the J-12 still comfortably transports four lucky occupants in what must have been the height of prewar luxury.

It’s clear that you have to drive these old cars. They require a skill set most people no longer possess. We’ve been spoiled by multispeed automatics; seamless, fuel-injected engines; and suspensions that instantly adjust to any road surface. Carburetors and magnetos were efficient in their day, but when driving vehicles that are more than a half century old, on challenging roads with frequent elevation changes, you must sense your car’s ability to cope, much the way a rider on a horse can feel the animal anticipate the trail, adjust his tempo, and then continue on. You continually check your ammeter, temperature gauge, and oil pressure. Modern cars don’t need these instruments. But in an old car, you must take the pulse of your mount. This kind of driving demands concentration. Your reward, particularly on two-lane byways, is a feeling that you’ve somehow wandered back in time.

Wanting a turn in the 1902 Mercedes Simplex, Jon Shirley kindly handed me the keys to his Ferrari 275GTB/4 NART Spyder. Ensconced in a bulky parka, he climbed aboard the Merc for a roller coaster–like thrill ride. Almost as an afterthought, he asked: “You do know how to drive one of these, don’t you?” I’d owned a twin-cam 275 GTB in the mid-1980s, and it was a delight once again to take the wheel of a similar car. Heading south from the Little River Inn in Little River on twisty Highway 1, ducking in and out of the low-lying fog, the damp coastal air made the fuel mixture perfect for the Spyder’s six double-choke Weber carbs. The shrill whoop-whoop of the Ferrari’s quad exhausts bounced merrily off the trees and chased us all the way to the historic Hop Kiln Winery in Healdsburg, California.

After lunch, it was my turn in the Mercedes Simplex. Top speed on level ground is about 48 mph, which feels more like 100 mph. John Bentley, the car’s restorer, hurdled the skinny, tired old crock down steep hills and around sharp corners with abandon. When you’re perched about four feet off the ground, and the wind is whistling by, you think, “There is no way this car will corner this fast.” But Bentley knows the Mercedes intimately. Although the Simplex’s primitive brakes only hint at stopping, Bentley clawed his way through tight turns while I tried to hang on. I was pleased and relieved when we shot past our destination, the historic Kenwood Inn in Kenwood, California, then turned back to park the Mercedes Simplex where all could admire it.  “One more leg,” Bentley chirped. “She’ll be right.” (And she was.)

After a pier-side lunch stop in Trinidad, California, I rode with Jaime Muldoon in his one-off Ferrari 250 Europa. Its lusty, 3-liter Colombo V-12 is essentially a detuned version of the legendary Ferrari 250 GTO’s power plant. Underneath its elegant Vignale Berlinetta body is a road-racing champion. Jaime accelerated hard, then kissed 100 mph in fourth to show me that Princess Liliana de Rethy’s custom coupe could still motor. The Muldoons have been on many tours, and they keep coming back. “You meet wonderful people, stay in places you might never have found, and at the end of the drive, you’ve made all these new friends,” said Muldoon’s wife, Cece, enthusiastically.

A final surprise on the tour was our visit to Arturo and Deborah Keller’s magnificent auto collection in Petaluma, California. They had just opened a new “French wing,” and we admired an exquisite group of Gallic classics before tucking into a Mexican-themed lunch of spit-roasted pig, black beans, and salsas accompanied by fine wine from the Pyramids vineyard, right on the property. Our last dinner at the Kenwood Inn was replete with warm toasts, pranks, and fun. No one wanted the evening to end.

Arriving at Pebble Beach, all the cars lined up behind the 1902 Mercedes and proudly drove up to The Lodge for a champagne toast. David Madeira, president and CEO of the LeMay Museum in Tacoma, Washington, summed up everyone’s feelings. “For ten days, we’re like family. This is a group of true enthusiasts, enjoying the best of what the hobby is all about.”For information about the2011 Motoring Classic, contact Al McEwan at almcewan@msn.com