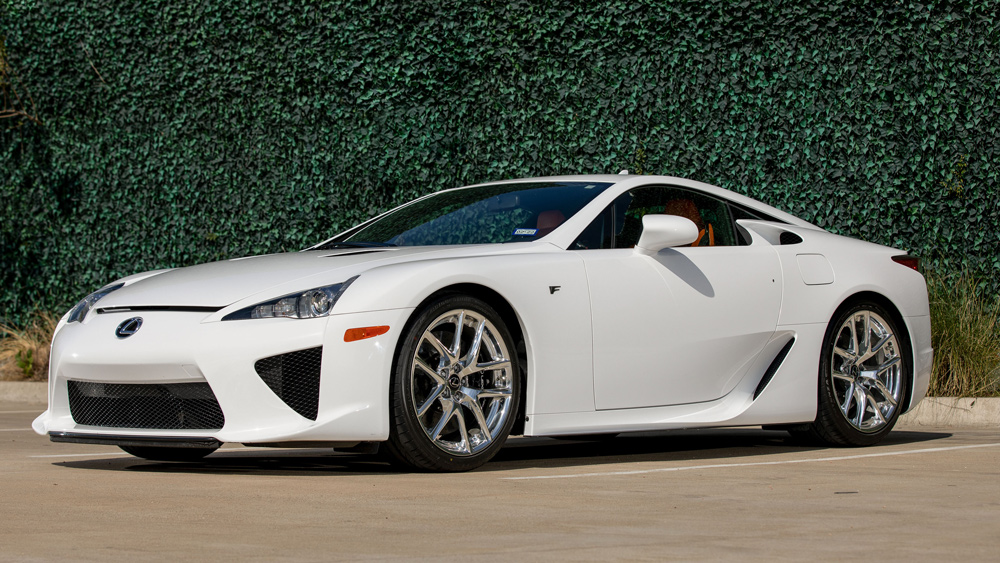 Contemporary supercars are the hot ticket at present, and despite the fact that there will always be something more capable lurking right around the corner with the coming model year, that doesn’t dissuade collectors from coveting yesterday’s latest-and-greatest, especially when their numbers are small and the demand for them is big. Among those most sought after is the Lexus LFA, an example of which will be offered through the RM Sotheby’s live auction in Phoenix, Ariz., on January 27, 2022.

The LFA has always been a bit of an outlier in the supercar hall of fame, largely because it’s so great yet was the proverbial flash-in-the pan when it came to production, which ceased before the model’s impact even had a chance to sink in. And to date, there has been no real Lexus successor to fill its shoes.

The original concept came straight from the top at Toyota, whose CEO Akio Toyoda wanted a vehicle to rival the usual suspects from Italy and Germany. Development began in the early 2000s, with the fourth and final concept called the LFA and unveiled to great acclaim at the 2009 Tokyo Motor Show.

In addition to the excitement generated by its appearance, much of the clamor was due to the engine, a power plant co-developed with Yamaha and derived from Toyota Racing’s V-10 engine. Capable of revving from idle to 9,000 rpm in scarcely more than half a second, the LFA’s 4.8-liter V-10 develops 553 hp at 8,700 rpm, with 354 ft lbs of torque at 6,800 rpm. The front-mid-mounted engine is shifted through a rear-mounted, six-speed single-clutch automated manual transmission driving the rear wheels.

The car on offer, serial No. 253, is one of about 190 examples built for the US market.  Photo by Rasy Ran, courtesy of RM Sotheby's.

Going from zero to 60 mph takes about 3.6 seconds, and the LFA can achieve a top speed of 203 mph. If the engine’s exotic metallurgy wasn’t enough, the otherworldly exhaust note, described by Toyota engineers as the “roar of an angel,” dispelled any doubt that the LFA was unlike any other supercar. And like a race car, the LFA was engineered for lightness and aerodynamic efficiency. Weighing about 3,263 pounds, the car features a materials list that reads like a periodic table, with aluminum, titanium and magnesium sharing the parts count with plentiful carbon-fiber-reinforced plastic.

Future collectability of the LFA was further assured by its scarcity, as only 500 units were produced between 2010 and 2012, with 436 “regular” and 64 “Nürburgring Package” examples made. According to unofficial numbers in the LFA Registry, this car on offer, serial No. 253, is one of about 190 built for the US market. While the base price was about $375,000, this specific automobile was delivered new to Dallas, Tex., with a sticker of $393,600. But values have since risen dramatically as collectors realize how rare and refined the LFA really is. The car crossing the RM Sotheby’s auction block in January is estimated to bring as much as $750,000.

Among the vehicle’s striking features is the orange-and-black-leather interior.  Photo by Rasy Ran, courtesy of RM Sotheby's.

According to RM Sotheby’s Car Specialist Matt Malamut, the LFA being presented is “showing just under 4,360 miles at the time of cataloging” and affords “a great opportunity for any collector of late-model supercars who wants to experience the thrill of the LFA’s V-10 engine while sitting in the comfort of a unique two-tone orange interior.” Malamut goes on to add that “the new owner will take it home with its service records, car cover, window sticker, carbon-fiber Tumi luggage, delivery literature, LFA hat and pullover, manuals, keys and even its original, serialized laser-cut crystal sculpture and cradle.”