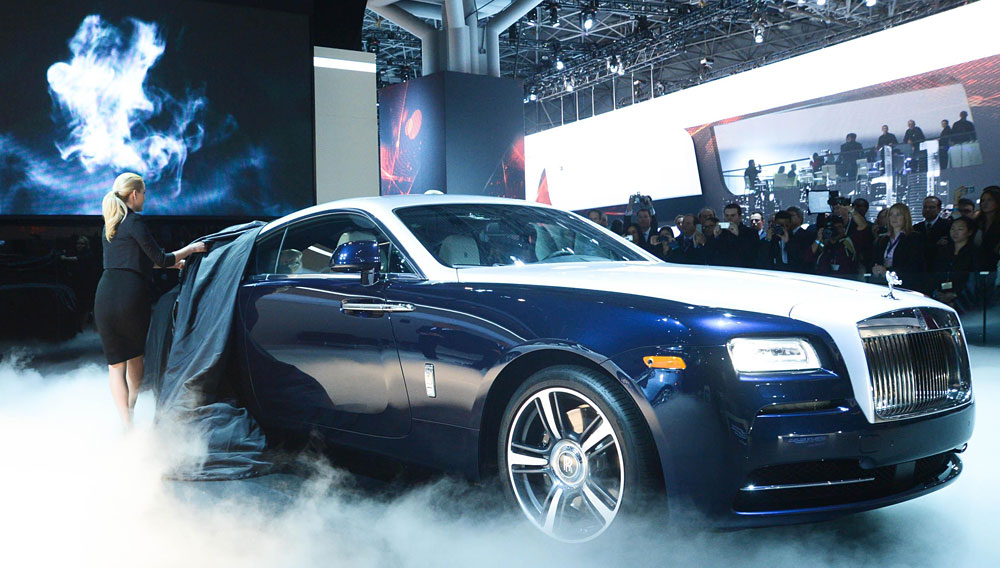 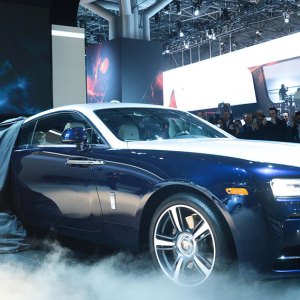 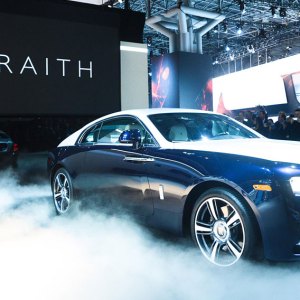 Stately is a word usually associated with Rolls-Royce Motor Cars, but in the case of the new Wraith, another S word—stunning—seems far more appropriate. Based on a shortened Ghost platform, the Wraith’s fastback styling and striking two-tone paint scheme make it the sportiest Rolls-Royce in recent memory.

“The purposeful fastback profile is Wraith’s defining element,” says Giles Taylor, the design director for Rolls-Royce. “Inherent in this graceful line that sweeps from the top of the screen to the very rear edge is the promise of fast, yet effortless touring.”

This swiftness promised by the design is backed up with the most powerful engine ever offered by Rolls. The 563 hp that the twin-turbo 6.6-liter V-12 produced in the Ghost is increased to 624 hp in the Wraith. Rolls-Royce says the car is capable of going from zero to 60 mph in 4.4 seconds and has an electronically limited top speed of 155 mph.

Even though the 122-inch wheelbase is some 7 inches shorter than the Ghost’s, the Wraith cuts an impressive figure, measuring 207 inches long overall. In addition, rear-hinged coach-style doors on the coupe add to the regal presence of the Wraith.

The inside has room for four adults, and the interior is decked out in classic Rolls-Royce fashion with Canadel Paneling open-grain wood veneers and a “starlight” headliner that uses small LEDs to create the look of the heavens above (the first time this element has been offered outside the range-topping Phantom). In addition to the traditional organ-stop controls for the vents, the center dash has a multifunction screen controlled by a console-mounted touchpad rather than a touchscreen monitor—such a feature “might have unsightly fingerprints at driver and passenger eye level,” the press release sniffs.

As the quickest Rolls-Royce in the lineup, the Wraith is positioned as a driver’s car and has a thicker, sportier feel to its steering wheel. The sporting ambience is heightened by the blood-orange-colored tips of the indicators on the speedometer, gauge package, and clock. Even the Spirit of Ecstasy hood ornament leans forward 5 degrees more than on other models, to emphasize the Wraith’s speed.

Perhaps the most interesting feature of all is the 8-speed ZF automatic Satellite Aided Transmission. Using GPS data from the car, the system preselects the correct transmission gear for the terrain ahead. Rather than reacting to inclines or tightening bends, it anticipates the road ahead for effortless cruising.

Of course, all this comes with a pretty hefty price tag: $284,900. The Wraith will arrive in dealerships in October. (www.rolls-roycemotorcars.com)