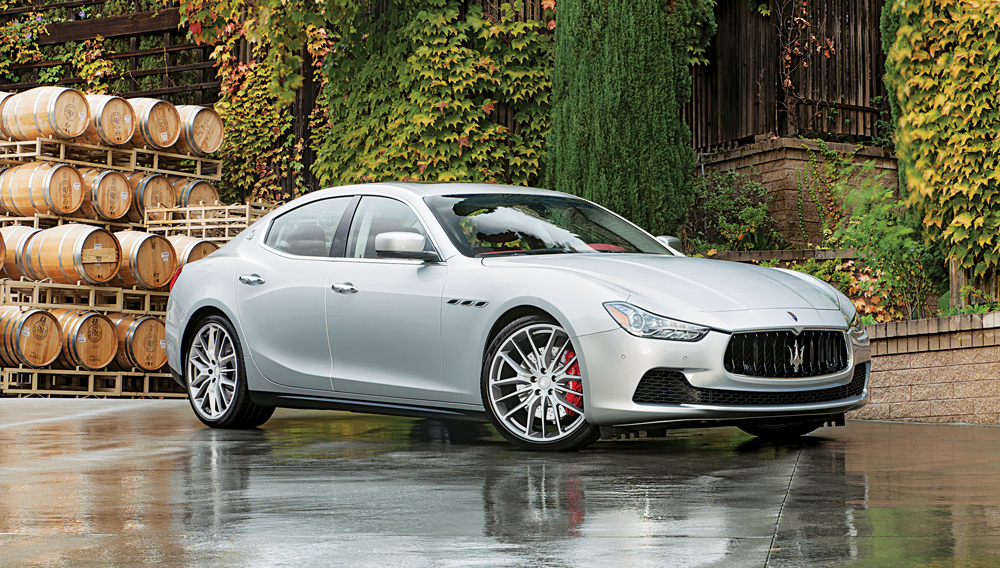 In the brand scheme

Among the Car of the Year competition’s six-figure-priced supercars, sports cars, and luxury coupes and convertibles, the Maserati Ghibli S Q4 was seen by our judges as neither a pretender nor a contender, but instead as a pleasant enough midsize sedan. They were not necessarily concerned that the Ghibli line may be carrying the highest hopes of Maserati and Fiat Chrysler Automobiles, the brand’s Italo-American parent company.

The S Q4 variant is a sporty car that works well when driven hard and begets driver involvement. The steering can be doughy, but the all-wheel drive makes the handling secure. The twin-turbo V-6—built with help from Ferrari—delivers 404 hp and 406 ft lbs of torque. Indeed, the S Q4 has more horsepower than Jaguar’s vaunted XK coupe and convertible, and it will charge from zero to 60 mph in 4.7 seconds.

The Ghibli S Q4 has a silhouette that is as elegant as the Quattroporte’s, and as with the company’s full-size sedan, its rear displays a pair of twin oval tailpipes that suggest the car’s aggressive nature. Those features may not intimidate someone driving a Car of the Year contender, but they can serve notice to others who are passed by an S Q4: You would do well to stay back and leave this car alone.

But can buyers in the V-8–centric United States live with twin-turbo V-6 power? Will the S Q4 help Maserati realize its announced ambitions of moving from boutique car builder to mass producer of 50,000 vehicles a year?

Based on our judges’ comments, which ranked the car favorably among the world’s elite automobiles, the answers are yes.