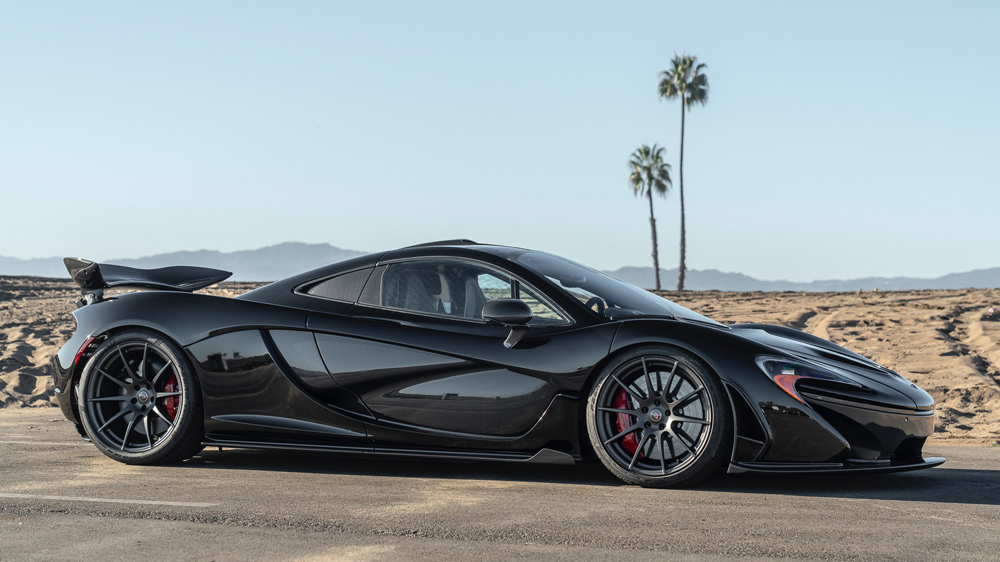 Through November 10, online automotive auction house CollectingCars.com is offering a 2015 McLaren P1, the plug-in hybrid hypercar that launched the British marque into the then-furthest reaches of the performance firmament. Debuting at the 2012 Paris Motor Show, the P1 was a pivotal statement, the spiritual successor to McLaren’s F1 (produced from 1992 through 1998) as McLaren jumped into the electrified fray with the likes of Ferrari’s LaFerrari and Porsche’s 918 Spyder.

With a top speed of 217 mph and a zero-to-62 mph time of 2.8 seconds (reaching 124 mph in 6.8 seconds), the P1 met every performance standard of the day in terms of numbers, but there was so much more to the model than speed. This car gave a glimpse of McLaren’s direction, a stepping-stone that paved the way for an electric future. But in the here and now, there’s plenty to love, and for number-crunching types, a combined output of 903 hp and 664 ft lbs of torque are a healthy start to any driving day.

The power train combines a rear-mid-mounted, twin-turbocharged 3.8-liter V-8 engine making 727 hp and 531 ft lbs of torque, with an electric motor—mounted directly onto the engine—making up the extra. The range in electric-only mode is about 19 miles, ideal for early morning departures so as not to wake a quiet neighborhood. The whole ensemble drives the rear wheels via a seven-speed, paddle-shift Graziano dual-clutch transmission.

Matching the McLaren P1’s state-of-the-art power-train configuration is its construction, designed and built with a level of precision worthy of a Formula 1 car. Central to McLaren’s approach to minimizing weight while enhancing strength and safety is carbon fiber, which comprises the monocoque chassis that weighs a mere 199 pounds. The carbon-fiber body further lightens the load, and the material’s presence is everywhere.

The interior is strictly business, eschewing carpet in deference to bare carbon for even greater weight reduction. Here, carbon fiber functions not just structurally, but as an aesthetic element as well. Carbon-fiber racing seats are trimmed in carbon-black leather, with Alcantara surfaces complemented by red stitching. Altogether, the assiduous weight-saving regimen has the P1 tipping the scales at 3,076 pounds.

McLaren’s P1 is a road-going masterpiece largely derived from Formula 1 expertise, applying aerodynamic advances from motorsport in service of speed and stability. Its hybrid-electric underpinnings offer additional performance, including an Instant Power Assist System (IPAS) that provides the electric motor with extra kick for even quicker acceleration. The Kinetic Energy Recovery System (KERS) stores energy through braking for later use in acceleration. And the Drag Reduction System (DRS) controls rear wing deployment, adjusting it for increased top speed in a straight line.

The example on offer (shown here) is from the final year of production, and is painted in Elite Fire Black, with red badges and brake calipers that provide a spark of visual contrast. In addition, the roof snorkel, bumpers, side panels, ducts, door mirrors, rear clam insert and rear wing are finished in gloss carbon fiber as a reminder that this mechanical marvel is as much a piece of art as it is technology.