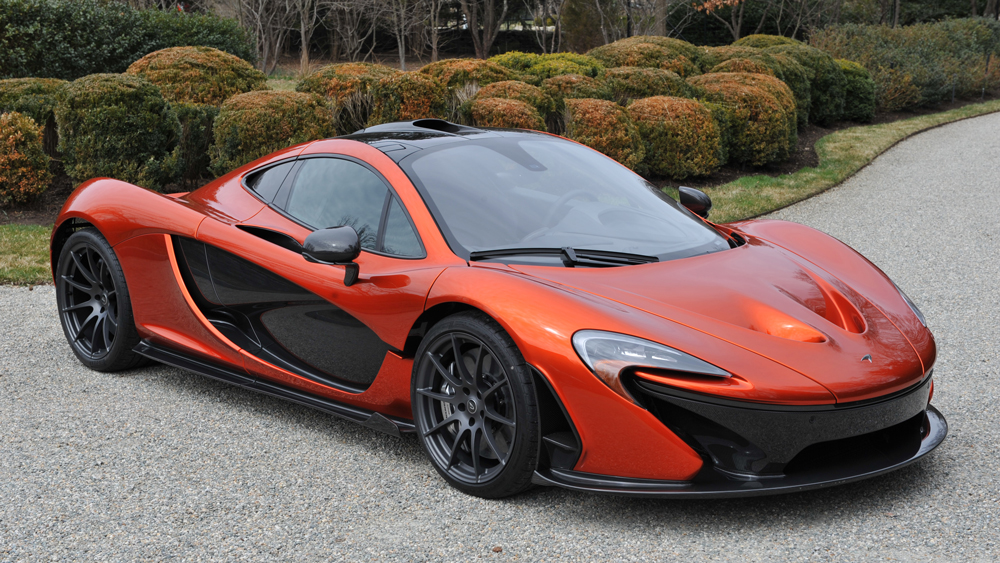 Although McLaren hardly needed to prove its bona fides, the British marque cemented its road-car reputation with the now-iconic F1, the quintessential first-generation supercar that affirmed its supremacy on both the street and track. Yet a mere 106 examples were ever built, done so between 1992 and 1998, and nearly a quarter-century elapsed until the company became a volume manufacturer with the awkwardly named MP4-12C in 2011. (Note to collectors: don’t be so quick to write this car off.) Once production at the new Woking factory was up and running, the announcement of the flagship McLaren P1 in 2012 set the stage for a model that would carry the torch of the legendary F1 into the 21st century.

Following in the footsteps of an icon is a challenge for even the most accomplished successor, but the P1 did just that. Development began in 2009, with the pivotal decision to abandon a normally aspirated V-12 engine (the F1 used a BMW-derived unit) in deference to a smaller, lighter twin-turbocharged V-8 of McLaren’s own manufacture. The word for the day was “hybrid,” and so, like its Porsche 918 Spyder and Ferrari LaFerrari competitors, the McLaren P1 had its drivetrain enhanced by an electric motor to become the automaker’s first hybrid supercar.

McLaren has always been about cutting-edge materials and technology, employing a carbon-fiber monocoque tub called the MonoCage as the nucleus of its car design. In the P1, a hot-rod version of McLaren’s 3.8-liter, twin-turbocharged M838T engine features enhanced structural and cooling capacity and a flat-plane crankshaft, while increasing output to 727 hp. Huge Formula 1-derived brakes were designed to facilitate maximum regenerative braking, with energy thus stored in the car’s lithium-ion battery pack.

The gasoline engine and integrated electric motor combine to deliver 903 hp to the rear wheels through a seven-speed dual-clutch transmission. Shattering performance was, predictably, a part of the deal, with the car reaching 60 mph from standstill in 2.8 seconds, and going from zero to 186 mph in 16.5 seconds. The latter metric betters that of the legendary F1 by more than five seconds.

Only 375 street-legal examples of the P1 were produced worldwide.  Photo: Courtesy of Collectors Garage.

Its electronically limited top speed of 217 mph, however, is significantly overshadowed by the unfettered top end of the F1, whose 240.1 mph record stood for 15 years. The McLaren P1 features an advanced brake-steer system, for improved turn-in and traction, that was initially developed for Formula 1 but subsequently banned. Race Chassis Control, an intelligent suspension system, lowers the car and stiffens springs by 300 percent in Race mode. Long a McLaren strong suit, attention to aerodynamics delivers a maximum downforce of 1,320 pounds, more than any road-going car at the time.

With two decades separating both of McLaren’s great supercars, it’s instructive to reflect on what has changed during the time that the F1 and P1 came to market. Both models aspired to offer the final word in performance, state-of-the-art technology and inimitable style. Back-to-back, they represent, on the one hand, an emphatic and near-final “analog” statement, and on the other, the first glimpse of an electrified automotive world to come.

The P1 covers zero to 186 mph in 16.5 seconds, a metric that betters that of its F1 predecessor by more than five seconds.  Photo: Courtesy of Collectors Garage.

The P1 was not only the halo of the marque during its brief time of manufacture, from late 2013 through the end of 2015, it was a declaration of intent—a proof of concept—and remains perhaps the most coveted McLaren road car short of the F1. With only 375 street-legal examples produced worldwide, and little more than 100 coming to the US (starting at $1,150,000), the P1 will always be rare and highly desirable. This example is number 220 of the 375 constructed, and likely one of only 36 delivered worldwide in this color.

Barney Ruprecht, partner and senior car specialist at Broad Arrow Group/Collectors Garage, puts the car in perspective, saying, “This Volcano Orange 2015 McLaren P1 is one of the most impressive designs of recent supercar production. They are notably quite lithe and comfortable to drive despite the overwhelming performance. This example, with 285 miles, is in as-new condition and is simply flawless in its presentation.”

A maximum downforce of 1,320 pounds is generated by the P1, more than any other production road car at the time it was introduced.  Photo: Courtesy of Collectors Garage.

Even with its pampered life, the car received a comprehensive technical overhaul and five-year service in February of this year, at a cost of $49,000, and has covered just three test miles since. The price of exclusivity never comes cheap, but then, icons rarely are. In the case of this McLaren P1, it’s being offered by Collectors Garage for $2,125,000.