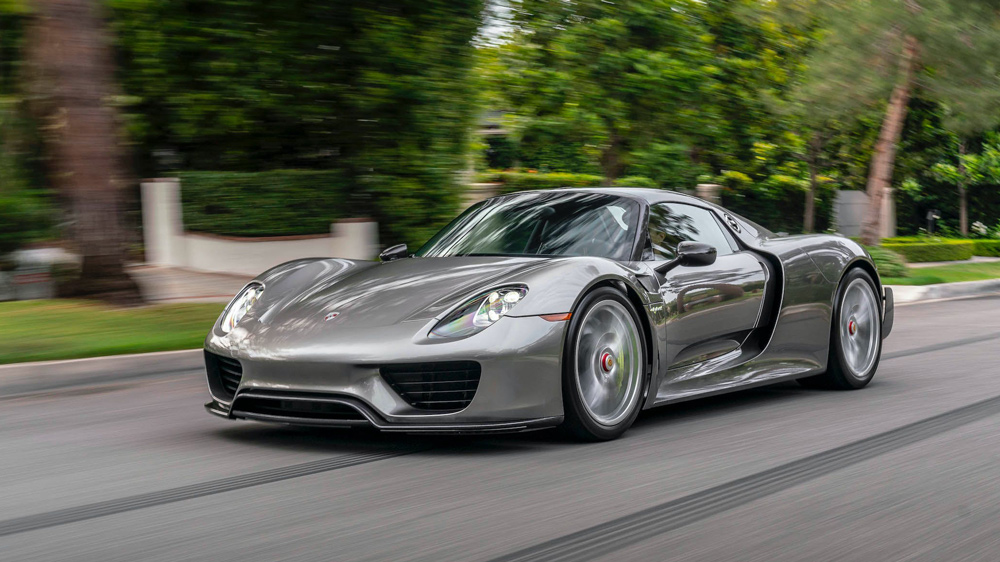 Porsche cars have always been favorites of Robb Report readers, so it’s little surprise that the Porsche 918 Spyder was named 2015 Robb Report Car of the Year. Throughout its brief period of production, the massively impressive hybrid had scant competition, but what no one would have imagined is that the automotive industry and its consumers would so quickly shift gears and set their sights on an all-electric future. In hindsight, that course was an inevitable one, accelerated by climate change and governmental regulations destined to render vehicles powered by internal combustion engines as defunct as the dinosaurs that fuel them.

Before the 918, it had been years since Porsche offered a genuine supercar (though some could claim the venerable 911 Turbo S is essentially just that). The Carrera GT, made from 2004 to 2007, is generally regarded as the company’s last “analog supercar,” but it was time for something new. The 918 Spyder was in an altogether different league compared to even the wickedest 911 Turbo or GT3 RS of its day. And it was built to showcase the potential of plug-in hybrid power turned “up to 11.”

The 918 shape was first unveiled as a concept car for the 80th Geneva Motor Show in 2010, followed with the production version at the 2013 Frankfurt Motor Show. Upon its debut, the 918 Spyder was Porsche’s highest-performing production car, a genuine novelty that took more than a little getting used to. Developed in Weissach and built in Zuffenhausen, the model had a production volume that mirrored its name, with a scant 918 examples made from September of 2013 until June of 2015.

Silently setting off from rest in all-electric mode, one hears only the articulation of suspension, the whirring of big brake rotors and the sound of road detritus crunching under impossibly wide tires. It’s a sensation not unlike wheeling a hand-powered lawnmower out of a garden shed and onto the grass without the ballistic clatter of a Briggs & Stratton two-stroke engine. Of course, acceleration in the Porsche 918 Spyder happens in the blink of an eye, and when the V-8 engine joins the choir, an a cappella solo becomes the Hallelujah chorus.

With a base MSRP of $845,000, the 918 Spyder was the most expensive Porsche production car ever, and the options list included the $84,000 Weissach Package. That option pared weight by 90 pounds, using magnesium rims, titanium bolts, lighter brakes and assorted aero enhancements to bring the total weight to 3,616 pounds. The diet made the car 0.1 seconds faster when launching from zero to 60 mph, with a time of 2.5 seconds, while allowing it to achieve a zero-to-100 mph time of 4.9 seconds (quicker than the Ferrari LaFerrari).

The model’s original base price was $845,000, making it the most expensive production car from Porsche.  Photo: Courtesy of CollectingCars.com.

The power-train configuration combines a mid-engine 4.6-liter, dry sump V-8 with two electric motors, one each driving front and rear wheels. Total output is 887 hp, at 8,500 rpm, and 944 ft lbs of torque in seventh gear, all shifted through a seven-speed PDK dual-clutch transmission.

The two electric motors and V-8 catapult the Porsche to a top speed of 214 mph. There are five driving modes, including the fully electric E-mode good for a 12-mile range on its own. But on a full tank of fuel and two charged batteries, the car can cruise as far as 420 miles. And then there’s Race mode which, in the Hot Lap setting, kicks out all the stops.

Yet the 918 Spyder is, despite its power and size, amenable to the less pressing task of in-town driving, though its width and low front-bumper height make navigating driveways, speed bumps and potholes an unwieldy proposition. The cabin is comfortable and not claustrophobic, but luggage space is essentially nil.

This 2015 example, available through an online auction at CollectingCars.com, is finished in gray with a black interior and equipped with the desirable Weissach Package. Showing 4,700 miles, it was serviced by Bruce Canepa in 2020, including full paint-protection film and fresh tires.