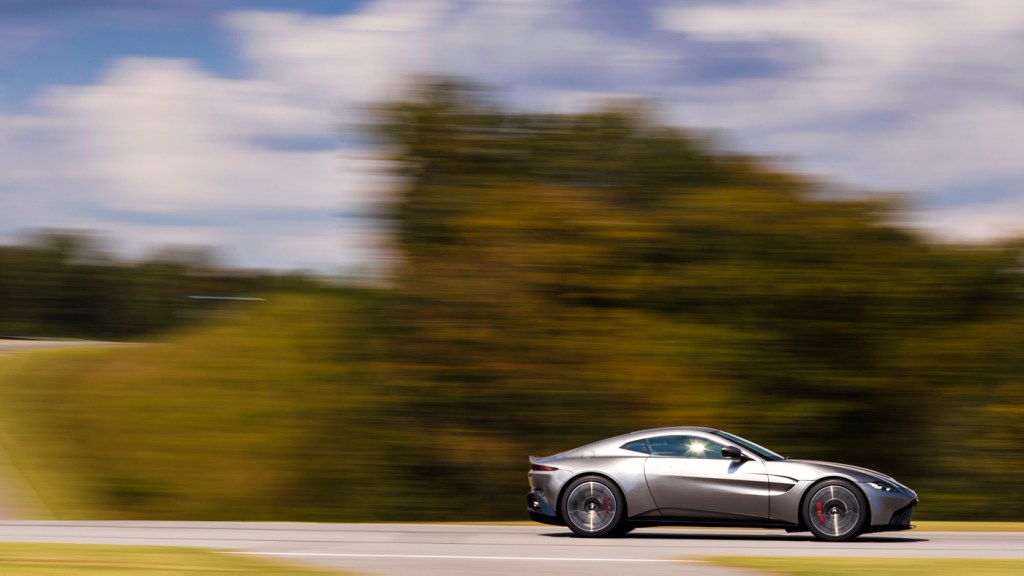 Here is your very first look at Aston Martin’s totally new, and very radical, Vantage coupe. The 2018 Vantage will be a shock to the system for longtime Aston lovers, as it is a fierce rethink of the charming coupe and roadster that we’ve seen for more than a decade.

With a starting price of $150,000, it should also galvanize the sub-$200,000 sector of the market, currently dominated by the likes of top-tier Porsche 911s and the Mercedes-AMG GT.

Aston Martin officially released these photos of the new vehicle today and, frankly, they don’t do it justice. I recently got a sneak peak of the actual car at Aston Martin’s United States offices in Irvine, California. When the sheet was yanked off, an appreciative shiver ran down my neck. The silver specimen was parked next to an older Vantage, the modest and restrained model we’ve been offered since 2005. The new Vantage doesn’t so much diverge from the previous model’s refined character as blow it up.

The coupe incorporates several design cues from the new DB11, including a clamshell hood, sucked-in sides and flared hips. But the signature Aston grille is presented here as a blacked-out silhouette, positioned as low on the sharp nose as possible. The aperture is outlined in a visually appealing 3-D fascia, similar to what is found on the One-77. It’s a neat trick.

The side view gives us a master’s class on tension and release. Deep side intakes live just behind the front wheels. A sharp character line begins in this fold of its aluminum skin, bisecting the doors. The rear is also a serious departure, with a single red LED strip running from the side flanks and rising to meet the spoiler lip. And the rear diffuser assembly is a thing of brutal beauty.

Put it all together and the result is cogent and incredibly aggressive. Other than the most expensive models like the One-77 and the Vulcan, I’ve never seen an Aston Martin design quite so masculine. Aficionados who can afford cars thrice as expensive will take notice. The Vantage has so much charisma, it deserves its own tent-pole movie franchise. One that demands a younger, cooler spy than the one that the marque has so long been associated with.

The interior is also totally rethought—a pastiche of carbon fiber, gorgeous bucket seats with bright leather inlays, a squared-off steering wheel, and an infotainment system taken from Mercedes-Benz. The example I saw featured both a tony and tech-forward aesthetic inside.

Aimed at the driving purist, the Vantage has traditionally been the lightest and most lithe model in the luxury automaker’s line. Aston Martin executives promise that this generation’s performance will live up to its looks. Sourced from AMG, the 4-liter, twin-turbo V-8—with 503 hp and 505 ft lbs of torque—is shoved low and deep into the cabin, allowing for a claimed 50/50 weight balance. Aston Martin says that the latest Vantage will lunge from zero to 60 in 3.6 seconds and allow a maximum speed of 195 mph.

The importance of the Vantage to the brand can’t be overstated. The last generation was the marque’s best-selling model ever. And following the release of the V-12 and V-8-powered DB11, the Vantage is the second model in the company’s “Second Century Plan,” in which it will release at least one core new product a year through 2022.

“The Vantage is the product that many people know and resonate with,” says Laura Schwab, Aston Martin’s president of the Americas. “And we are so very excited by it. We’ve made a lot of promises of what to expect in the coming years, and the Vantage proves that our plans are real. It’s a complete transformation. We’re doing what we said we’re going to do.”

Deliveries of the new Vantage will start in the second quarter of next year.