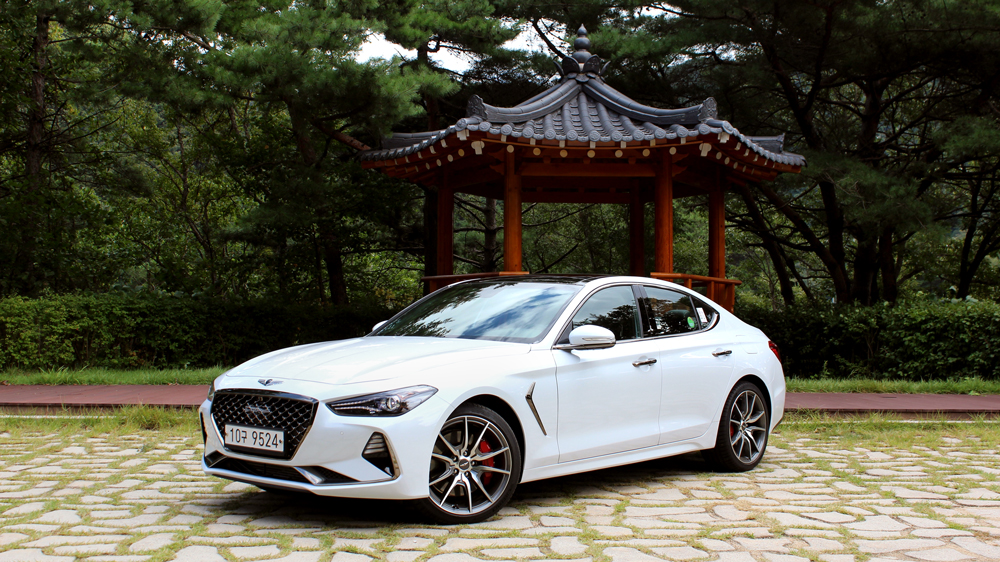 When it comes to Genesis, it would be hard to accuse Hyundai of resting on its laurels. In 2015, Genesis, formerly a nameplate for upscale Hyundai cars, became Genesis, the country’s first homegrown standalone luxury marque. Eager to differentiate itself, the “H-word” is verboten when speaking of the brand and its grand design to muscle in on the European big boys: Mercedes-Benz, BMW, and Audi.

Enter the 2018 Genesis G70, a midsize luxury sport sedan that will compete with the Mercedes-Benz C Class, BMW 3 Series, and Audi A4 when it arrives stateside in spring. So how does it stack up? After a day of both street and track driving in a fully loaded Genesis G70 3.3 Sport, I’m inclined to put my money on the upstart.

Chassis tuning is the piece of the design puzzle that the South Korean brand just couldn’t crack up until now. But it has recently snagged some major talent from Germany, among them chassis guru Albert Biermann from BMW’s performance M division, whose influence on the G70 is immediately apparent. Decidedly sporty yet equally refined and comfortable, the Genesis G70 exhibits poise, compliance, and body control that puts it at the head of its class.

G70 buyers in the United States get a choice of two engines: a turbocharged 2.0-liter four-cylinder with 249 hp and 260 ft lbs or a 3.3-liter twin-turbo V-6 that makes a class-leading 365 hp and 376 ft lbs of torque. And, yes, the G70 3.3 with the Sport package is quick. Both power plants are mated to a brainy eight-speed automatic with paddle shifters, and all-wheel-drive is optional. A North-American-only rear-drive 2.0-liter with Sport Package that generates 252 hp and has a six-speed manual will appeal to enthusiasts on a tighter budget.

It’s easy to feel the car’s BMW influence, and as Biermann said over lunch, “For me the G70 has special meaning. Key targets were driving position and fun to drive, but comfort also was very important.” Then, with a boyish grin, he added, “I burned a lot of tires getting there”—those being the 19-inch Michelin Pilot Sport 4s on the G70 3.3 with the Sports package that we drove at this launch. Impressions on the four-cylinder cars will have to wait.

The G70 is a handsome sedan, if not particularly distinctive. Its muscular rear haunches are reminiscent of certain BMW sedans, and the snout is dominated by Genesis’ corporate grill and a flurry of hungry air intakes. Lateral LED sweeps within the headlights introduce a new design theme for the brand.

Inside, the G70’s cabin impresses with exquisite craftsmanship, high-quality materials, and lovely detailing. The seats—dressed in rich nappa leather for our drive—exhibit a superb blend of comfort and support. Biermann’s obsession with driving position pays dividends; the G70’s cockpit is intimate with ideally placed controls. The dash is dominated by an 8-inch touchscreen supporting Android Auto and Apple CarPlay. All the expected radar- and camera-based safety gear are part of the Genesis Active Safety Control suite.

The G70 was a joy to fling about on sinuous mountain roads, and its poise on the racetrack was further testament to its quality. The fact that the Genesis was able to happily negotiate the challenging Injae Speedium only shows the depths of engineering that went into this car.

Pricing will be revealed closer to the launch date, but you can bet its bottom line will take a big swipe at the competition. There is no question the 2018 Genesis G70 has the goods to challenge the German establishment. The next big hurdle is brand perception.