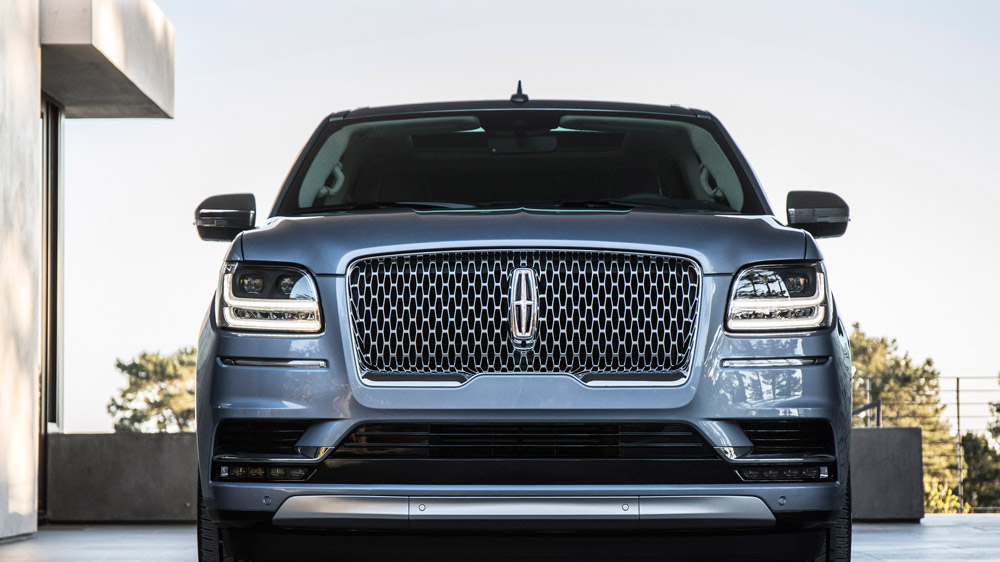 Ah, Malibu. The movies and postcards depict easy, beachfront living with open roads, fresh air, and mild weather. But don’t believe it. The grim reality of the Pacific Coast Highway (PCH) on a Saturday is bumper-to-bumper traffic, exhaust fumes, and a cold, damp fog that hangs about for half the day and then suddenly gives way to scorching sun.

Considering this less-than-idyllic scene, the vehicle of choice for a drive up the coast is not the stereotypical low-slung convertible with performance tires and sport suspension. It is a comfortable, roomy people carrier imbued with the brawn of a linebacker and the grace of a ballet dancer. Enter the Lincoln Navigator.

Introduced 20 years ago, the Navigator set the standard for large, three-row luxury SUVs. Now in its fourth generation, it stands as a testament—along with the Continental sedan and midsized Nautilus crossover—to Lincoln’s renaissance. Design director David Woodhouse and his team penned the latest Navigator with sleeker lines, more modern proportions, and a new front grille.

A tony transport with a wealth of room.  Photo: Courtesy Lincoln.

“We wanted the exterior to be about elegance,” Woodhouse told us when the Navigator debuted last year at the New York Auto Show. Our Black Label edition, Lincoln’s most elite trim level (starting at $93,705), is painted in Chroma Molten Gold—an understated beige-brown—and fitted with black-and-chrome 22-inch wheels, said to be inspired by the turbine blades of a jet engine.

On this weekend, I am playing chauffeur and tour guide for an out-of-town visitor—one who happens to be a power-train engineer for a German car company. Like a tourist waiting to pass through a foreign immigration checkpoint, I feel self-conscious, worried that negative stereotypes might color Herr Ingenieur’s estimation of this American behemoth. “It looks nice,” he says, as we both climb aboard with the help of retractable running boards. Score one for the U.S.A.

The Navigator’s redesigned cabin boasts refined details, improved materials, and plenty of nooks and crannies for our phones, bags, and bottles of coconut water. Three interior themes are available; ours is “Chalet,” with glossy wood trim and bone-colored leather upholstery, monogrammed with the same pattern found on the front radiator grille. Our test vehicle is fitted with optional 30-way seats, and although they seemed to move in every possible direction, I couldn’t quite find the right fit for my five-foot-four frame. I did like their massaging and ventilating features, which kept me cool and relaxed as we headed into Carpocalypse.

We hadn’t yet reached a standstill when we left Santa Monica and headed north. Traffic was sluggish, but the Navigator’s high seating position allowed us to see over the cars ahead and find the gaps. With a press of the gas pedal, our Navigator delivered ample, effortless power, and a couple of lane changes later, those gaps were quickly filled.

“Is it a V-8?” my traveling companion asked after I passed a slow-moving pickup truck filled with gardening equipment. It’s not a V-8, but it feels like one. Black Label Navigators get a twin-turbocharged, 3.5-liter V-6 that makes 450 hp and 510 ft lbs of torque, paired with a 10-speed automatic transmission. For a brief stretch, the road clears, and I hammer it down among the undulating hills past Pepperdine University. The Navigator is equipped with six drive modes, which aren’t labeled in traditional car-speak but in more conversational language. For example, you will not find a Sport mode. Instead, it’s called “Excite,” which does some sporty-ish things, such as shifting gears at higher revs, making the most of the engine’s power and torque and propelling us easily and smoothly uphill.

Lincoln has touted its “quiet luxury” mantra in recent years, and for good reason. Although there is the slight rumble of a deep exhaust note upon acceleration, the interior is otherwise silent. Our German friend noted the quietness, as well. Woodhouse uses the word “sanctuary” to describe the feeling of the Navigator cabin, and we would be inclined to agree. That is, until the guy in the lowrider pulls up with his 24-inch, 4,000-watt aftermarket subwoofer.

Some of the most spacious seating on the market.  Photo: Courtesy Lincoln.

Of course, the Navigator isn’t designed to just carry two people; its three-row seating is some of the most spacious on the market. Back-seat passengers get their own charge ports and storage cubbies, and an optional rear entertainment system allows wireless streaming (via the Navigator’s Wi-Fi connection) to 10-inch adjustable screens. Our luggage fits easily with all three rows in place, and should my guest have been inclined to lug a surfboard back with him, it would have easily been accommodated with the rear seats folded.

The best part of the day came after the slog to Ventura County and back. I pulled into a parking spot on Ocean Avenue, turned up some Chet Baker on the Revel audio system (with 19 speakers), and watched the waves crash over the Santa Monica sand. If you have to be a chauffeur, the Lincoln Navigator is certainly not a bad place to be one. But next time, I’m going to plant myself firmly in the middle row and let someone else drive.