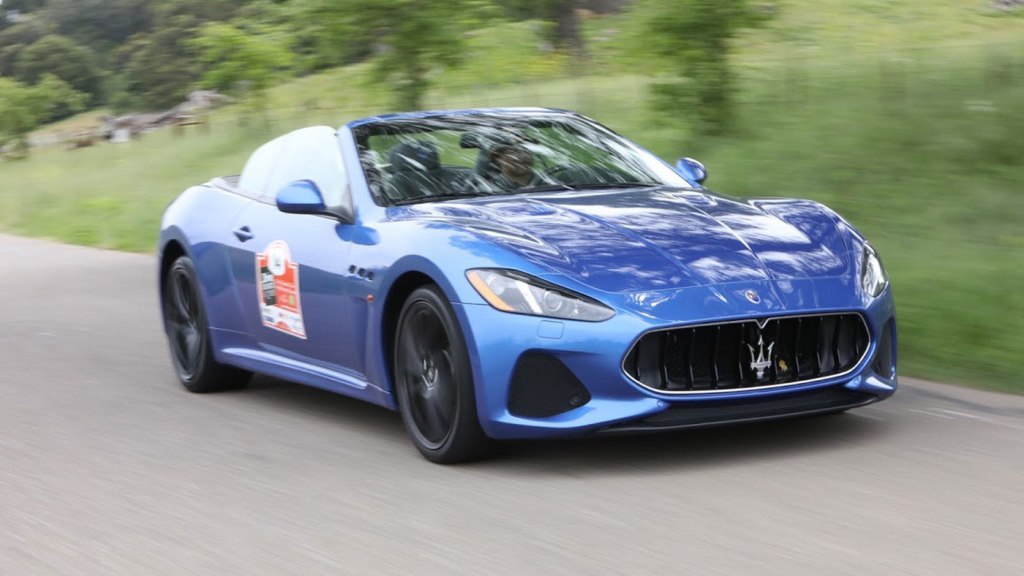 We were coming in hot toward the tight curve ahead but I refused to give ground to the cars in front, flush with trust in the responsive nature of my machine. It was a confidence that was not shared by my navigator, however, as her knuckles clutched white on the seat.

The scene may have been similar to that of Alfieri Maserati and his mechanic as they competed in the 1926 Targa Florio with the Maserati Tipo 26 roadster—at least I flatter myself with the thought. But even though my partner and I are only participating in a friendly road rally for charity, our car is a 2018 Maserati GranTurismo Convertible, and it shows the “competition” no quarter.

The event was the Drive Toward a Cure fundraising tour of California for Parkinson’s research, and our eagerness to enlist was enhanced by the fact that Maserati was lending a car to the cause. This year’s model of the open-top GranTurismo comes in Sport and racier MC (Maserati Corse) variants, of which ours was a latter example presented in a stunning Blu Sofisticato with Nero interior.

The MC version of the GranTurismo convertible cruises from zero to 62 mph in 4.9 seconds on its way to 180 mph.  Photo by Mark Davidson, courtesy Drive Toward a Cure.

Both the Sport and MC (starting at $150,380 and $162,880, respectively) benefit from a 454 hp, 4.7-liter naturally aspirated V-8 engine—generating 384 ft lbs of torque—mated to a six-speed ZF automatic transmission. The power-train combination spurs the MC version from zero to 62 mph in 4.9 seconds and allows it to reach a top speed of 180 mph—performance specs that required great self-restraint not to reach on the smooth slivers of empty wine country road in Santa Barbara County.

The car comes with five driving modes, including two manual gear-select settings. Sport mode features MC Auto Shift, which facilitates gear transitions in only 100 milliseconds, and the MC Start Strategy for launch control capability. In the same mode, exhaust is redirected away from the silencer before exiting the round ports projecting from the diffusor. The result is a thrilling, throaty soundtrack that reverberated through the sandstone- and chaparral-covered canyons we carved through.

As we played cat-and-mouse with a Ferrari 488 GTB and Dodge Hellcat on a steep narrow descent near Santa Ynez, the consistent numeric climb on the digital speedometer spoke volumes for the sense of assurance elicited from the car’s heightened handling and automotive athleticism. Adding to its poise under pressure are the new Pirelli P Zero tires that bring down braking distance by up to 5 percent.

Performance also profits from the convertible’s fine-tuned exterior aesthetic that offers improved aerodynamics over previous iterations. Contributing factors include the shark nose–shaped front grille, revised lateral air ducts on the front bumper, and a re-envisioned central splitter—all of which help lower the vehicle’s overall drag coefficient to .33, which is .02 better than before. That figure, however, was surely hampered when, from the passenger seat, I would raise my hands in a rollercoaster-wave as we rode roofless.

Our car’s cabin combined motorsport and Mayfair with leather upholstery from Poltrona Frau and comprehensive carbon-fiber trim. Ample amenities also included an 8.4-inch touchscreen display, Android and Apple CarPlay capability, a new rearview camera, and a Harman Kardon sound system. And while it’s an ideal transport for two, the tony tourer surprised me with its relative room at the back, a position I took alongside my 87-year-old father as four of us traveled comfortably to a celebratory dinner when the three-day drive was done.

Although it’s been 92 years since the Maserati brothers premiered the topless Tipo 26, a bygone beauty born for competition, that first namesake car created a legacy that not only lives on but is being built upon today, as evidenced by the GranTurismo Convertible. Behind the wheel, it’s easy to feel that the Golden Age of the gentleman racer has returned.