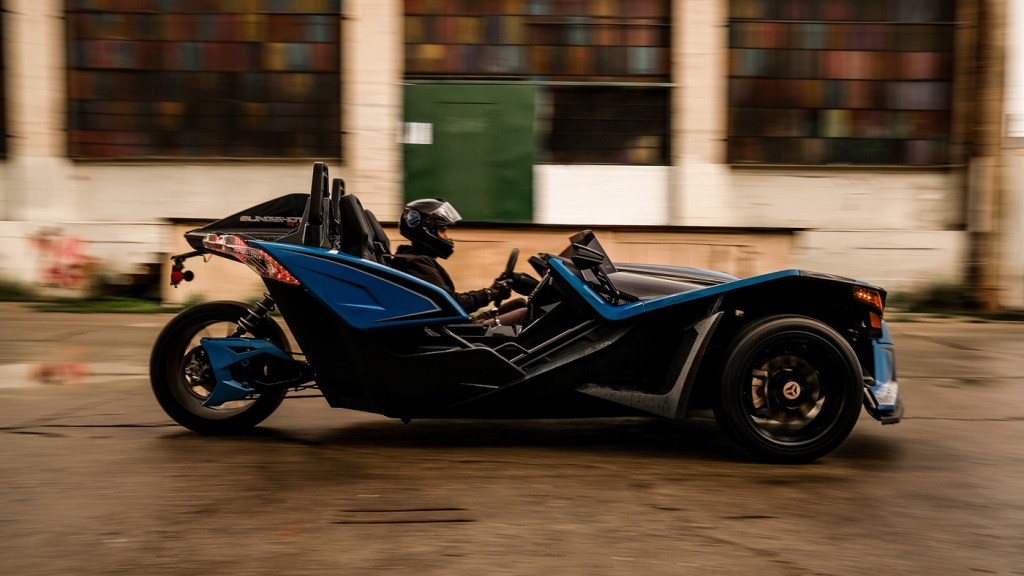 I was reluctant to accept the loan. For months, Polaris had been emailing me, trying to figure out a good time to drop off their 2018 Slingshot SLR at my doorstep. I was certain I would hate it. How was a power sports company famous for UTVs, like the Polaris RZR XP Turbo S, going to try to peddle a sports car to the public? What the hell do they know about on-road vehicle dynamics? How are they going to achieve a pleasing driving experience when cars like the Ariel Atom and Caterham Seven have had that perfected for years, especially when it’s offering only three wheels?

I pushed it aside for as long as I could stall. That is, until lightning struck in the form of a bright, yet slightly terrifying idea: to ring in my 33rd birthday in style, I’ll road-trip the Slingshot up to Northern California to spend some time with friends in the Bay Area. No one in their right mind would ever road-trip a roof-free, door-free, fourth tire-free motor vehicle 400 miles through soggy weather from Los Angeles to San Francisco. That’s preposterous … and why it’s what I must do.

A person who operates within the confines of sanity would feel ill at the thought of this road trip, but I’m inspired. I have a challenge to surmount. I refuse to let springtime sogginess impede my driving pleasure. Most days inside my mind are 72 degrees and sunny. My actions should reflect that. It’s my birthday week. It’s time to celebrate me.

The Polaris Slingshot SLR offers a motorcycle-like level of exposure to the elements.  Photo by Sam Bendall.

Upon its delivery, those original negative assumptions reared back into my psyche and followed me all the way up until I flopped my body behind the controls. The Sparco steering wheel is playfully small, the five-speed, short-throw shifter falls effortlessly to hand, and the seats are surprisingly comfortable. “OK, this isn’t so bad,” I’m shocked to say to myself, and I haven’t even pushed the start button. But as soon as I do, it keeps getting better.

The 173 hp, GM-sourced 2.4-liter Ecotec four-cylinder engine has a pleasingly exotic growl all the way to its 7,200 rpm redline. Somehow Polaris has injected personality into an unassuming mill that sees duty under bygone Chevrolet Cobalts. Once I connect that power to the belt-driven rear wheel (reinforced by carbon fiber), however, and put pedal to the proverbial metal, every one of my negative assumptions dissolve into the wind.

Within my first minutes behind the wheel, I discover how playful the Slingshot—with its outer-space design—actually is. There’s almost no other way to drive a Polaris Slingshot other than hard. It begs for its rear tread to be burned. One of the advantages of having only one wheel in back is that rear-end breakaway is progressive and more predictable. As a result, the Slingshot is anything but intimidating to drift. I must spare the rear tread, though. It needs to get me up to the Bay Area and back in one piece.

One peculiarity that requires a bit of a learning curve is just how exactly one enters and exits. The Slingshot may be without doors, but ingress and egress require a little acrobatics, or at least a cursory knowledge of yoga. The best method I eventually found was to place both feet inside the car and let my body follow. As soon as I was seated, I was taken aback, not only by how much space there is inside the Slingshot, but also by the ergonomics.

Once the time comes to head north, I’m already aware that the Slingshot is one of the loudest experiences I’ve had behind the wheel. Your hearing is safe if you’re planning a trip in town, but sustained highway travel is enough to make your eardrums yell “uncle.” At 80 mph, the five-speed Slingshot is turning about 3,500 rpm. The growl at idle crescendos into a battle cry as revs build. While the Ecotec is still pleasing in its upper registers, it’s anathema to the vulnerable inner ear. Combine that engine noise with the inherent open-cockpit wind noise and the whir of the drive belt, and you have a recipe for hearing loss.

Once you’ve readied your remedies to combat the Slingshot’s inherent shortcomings, it actually becomes a fitting road-trip chariot. The seats are incredibly comfortable and supportive enough to rival the industry-leading, NASA-inspired “Zero Gravity” seats found in Infinitis, which is interesting because they’re nothing to look at. If you’re a fan of Salvador Dalí’s The Persistence of Memory, then you’ll love how the Slingshot’s standard upholstery reminds you of those melting clocks, but most people will look at the Slingshot’s seats and think about botched plastic surgery or the bags under grandma’s eyes. Well, at least they’re as comfortable as grandma’s embrace.

It’s that level of comfort that allows you to lose yourself in the Slingshot’s driving experience during extended travel. Sure, this car is most fun when you’re drifting and whipping up more donuts than Krispy Kreme, but it’s also terrific on a meandering stretch of rural road. Winding along tree-lined U.S. 101 just outside of San Juan Bautista, Calif., the Ecotec’s 3,500-rpm hum lulls me into a deep appreciation for the ingredients that make the Slingshot special. I’m surrounded by some of the most beautiful roadside scenery the world has to offer, the rain that I encountered on the way up to the Bay Area a week earlier has given way to sunny perfection, of which I am only more intimate with thanks to the lack of doors and a roof. Instead of pinching myself to check if I’m dreaming, I reach out of the side of the car— with my motorcycle gloves on, of course — and let my left hand brush against the rushing asphalt … because I’m in a Slingshot, and damn it, I can do that.

A Sparco steering wheel and five-speed, short-throw shifter are part of the sporty cockpit.  Photo by Sam Bendall.

Returning both hands back onto the steering wheel, I consider the Slingshot’s competition. The Mazda MX-5 Miata would entertain me more with its superior steering feel and incredible Bose audio, but I wouldn’t feel like a supercar-driving celebrity in it, and I obviously wouldn’t be enjoying that motorcycle-like level of exposure to the elements. The Ariel Atom and Caterham Seven 360, on the other hand, offer me that extreme open-air exposure I crave, but those cars cost more than twice as much as the $28,999 Polaris.

And that dollar figure leads me to my favorite thing about the Slingshot. It’s an unforgettable machine because it gives me roughly the same feeling I get behind the wheel of a McLaren 570S Spider, but for one-tenth the price. No other car in production today can give you so much for so little.

The Polaris Slingshot SLR sits proudly among my top 20 favorite driving experiences. For that, it’s likely to go down as my biggest surprise of 2018. I’m really happy I finally decided to accept the loan.