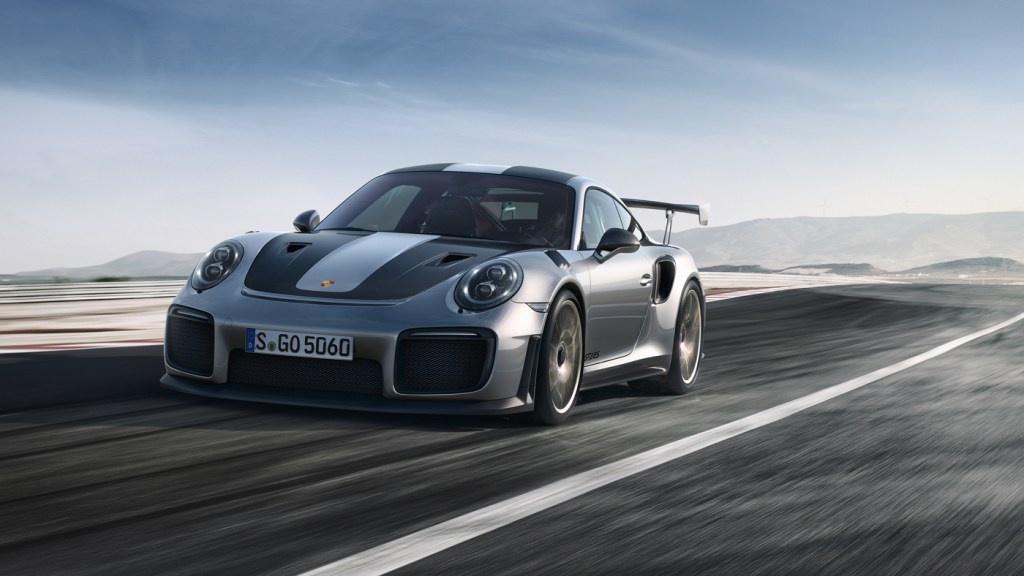 The last two months have been momentous for Porsche as the marque manufactured its one millionth 911, premiered its most monstrous 911 Turbo S, and now has unveiled the most powerful and fleet street-legal 911 model in its history—the 2018 Porsche 911 GT2 RS. The latest in the iconic 911 line—which debuted in 1963—appeared in public for the first time at England’s Goodwood Festival of Speed, from June 30 through July 2.

The new GT2 RS has been bolstered by a 700 hp, 3.8-liter twin-turbo flat-six engine (generating 553 ft lbs of torque) mated with a Porsche Doppelkupplung (PDK) GT 7-speed double-clutch transmission. The pairing allows the coupe to cover zero to 60 mph in 2.7 seconds and to reach a top track speed of 211 mph. The power train represents an increase of 80 horses and 37 ft lbs of torque over the original 2011 version, as well as a rate of acceleration that is quicker by .7 seconds. The engine’s performance has been enhanced not only by its turbochargers, but with a secondary cooling system that sprays water on the intercoolers when the temperature exceeds ideal operational levels.

The iconic lines and unprecedented power of the Porsche’s 911 GT2 RS.

Lending the car its cat-like reflexes without being skittish is a racing-inspired chassis that has had its chassis joints replaced by ball joints for added rigidity—a first for any road-specific Porsche to date. To ensure that the driver’s intent is most efficiently translated, the Porsche Stability Management System (PSM) monitors driving dynamics and activates the Porsche Ceramic Composite Brakes (PCCB) as needed. In addition, rear-axle steering directs the front and back wheels in opposite directions at low speed, and in the same orientation at high speed to simulate a shorter or longer wheelbase, respectively.

Excess weight has been eradicated by the use of carbon fiber reinforced plastic (CFRP) throughout much of the car, including the rear quarter panel air intakes, front fenders, and wheel housing vents, while magnesium makes up the roof. To further lighten the load, Porsche’s optional Weissach package (a $31,000 upgrade) shaves off roughly 40 more pounds with the addition of magnesium wheels, carbon-fiber roof and anti-roll bars, and a host of other composite componentry.

Perhaps more visually impressive than the exterior, however, is what lies inside. The cockpit is dressed in black leather, red Alcantara accents, and carbon-fiber detailing. The latter includes the reinforced backrests of the full bucket seats. Swaddled in style, the pilot has easy access to the Porsche Communication Management system (for navigation and infotainment), and Porsche Connect Plus, the Porsche Track Precision App, and the optional Chrono Package when track time takes precedence.

As with the 911 Turbo S Exclusive Series Coupe, announced June 7, the 911 GT2 RS has also been synched up with a Porsche Design watch. In this case it’s the 911 GT2 RS Chronograph—available only to the vehicle’s owners. The titanium-cased timepiece presents a carbon-fiber face that mirrors the instrument cluster of the car, and each can be further tailored to match the buyer’s specific automotive trim choices.