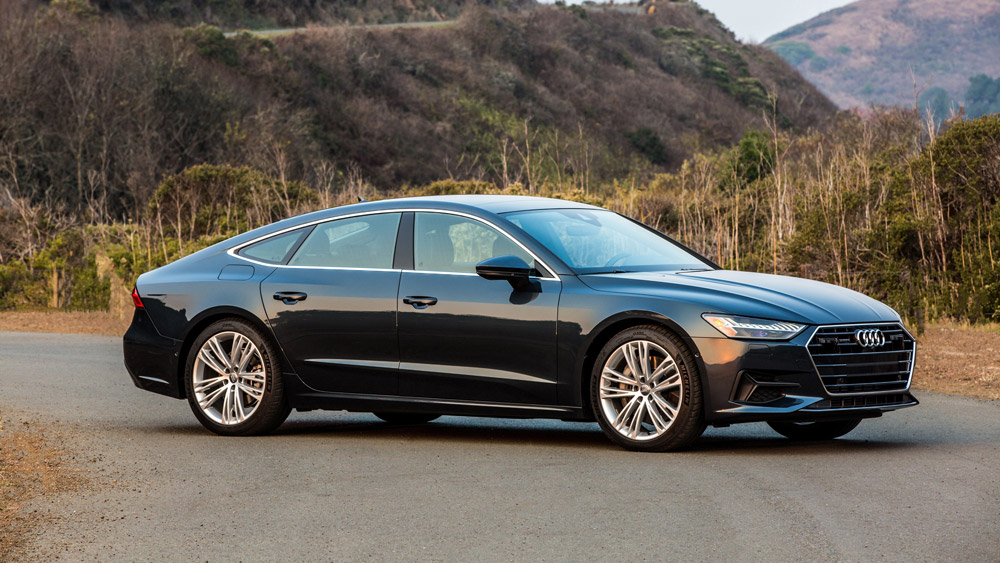 Audi designer Sebastiano Russo thoughtfully circles the reimagined A7 like the artist he is. “Consider this new iteration of the popular four-door, all-wheel-drive hatchback sedan as you would a beautiful woman but without much makeup,” he says. “There’s an elegance but also an understated quality to what we wanted to create.”

Russo and his team indeed have managed to lend a striking crispness to the A7 that is meant to carry the model’s second generation into the 2020s. In a presentation at Nine Suns, an appropriately modernist hilltop winery in Napa, Calif., Audi highlighted A7 features such as a more striking trapezoidal grille, a new flank crease between wheel arches, and full width LED tail lights. Call it the old A7, after a visit to the spa via the computer lab.

Inside, the model boasts a new MMI infotainment system with multiple screens that offer the same haptic feedback familiar to smartphone owners. In fact, the drag-and-drop app functionality of the new system is meant to lure motorists away from their phones while driving. There’s also a decidedly three-dimensional nature to the new dash design featuring stitched leather and wooden surfaces outlined by delicate light strips that have 30-shade adjustability.

Starting at $70,000, the A7 is roughly $10,000 more than the standard four-door A6 sedan—whose seventh generation also was on display at the event The newer model is viewed by Audi as a machine for those who want to make a statement, the same logic that applies to BMW‘s 6 Series Grand Turismo and Mercedes-Benz‘s CLS.

In Audi’s case, the A7 pulls up with impressive new levels of technology, something the German automaker—soon to deliver its first all-electric car—is determined to make its calling card. In the case of the A7, the tech all starts at the very nose of the car. LED headlights can be instantly upgraded to the marque’s Matrix technology, which has been approved by European regulators but still awaits NHTSA’s approval stateside. The system features 32 smaller lights that allow for more targeted and powerful beams, and is capable of selectively shading and lighting areas depending on what it sees.

Audi’s A7 sedan slicing through Napa.  Photo: Courtesy of Audi.

Other high-tech highpoints borrowed from Audi’s recently relaunched A8 flagship include 18-way seats with optional massage functions, as well as an array of driver-assist features that include an adaptive cruise system that now will help keep you in your lane.

But best of all, the A7 demonstrated a poise that instills confidence on my test drive. On undulating roads, its rear end never broke free despite genuine opportunities to do so. Maybe it’s the car’s heft and stance, maybe it’s the all-wheel Quattro system but, either way, for a big sedan with particularly good cargo space, the A7 does a very good impression of a racy and nimble A4. Which is some feat.