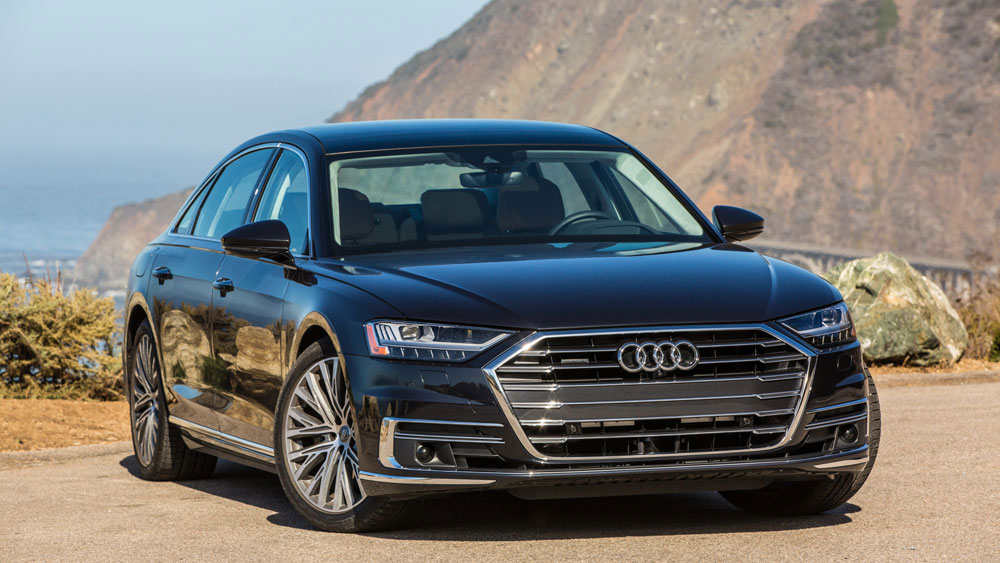 American novelist Jack Kerouac wrote of the California coastal town of Big Sur, “And when the fog’s over and the stars and the moon come out at night it’ll be a beautiful sight.” It’s here in the misty enclave off Highway 1 that we experience Audi’s newest iteration of the A8, both simplified and more technologically complex. Starting at $83,800, the new Audi A8—one of the 2019 Robb Report Car of the Year competitors—embodies what designers call “future premium.”

“In the past, luxury has been rather garish,” says Daniel de Jong, Audi’s interior interface hardware designer. “With the new car, we are proud we were able to keep the design clean.” As with Audi’s A6 and A7, the look of the new A8 has been tidied up compared with its predecessor. “All of the lines were designed to flow around the car,” de Jong notes. Up front is a wider, flatter single-frame grille, flanked by LED matrix headlights. Subtly flared fenders suggest all-wheel drive, an homage to early Quattro racecars. In the rear, a bar of light stretches across the deck lid, framing animated OLED taillamps that perform a dance of light upon start-up. On the inside, designers eliminated more than 30 buttons. This was achieved by combining certain features together, like placing the auto-hold and parking brake buttons on the gear shifter.

In the U.S., only the long-wheelbase version is available.  Photo: Courtesy of Audi AG.

The best full-size executive sedans have the power to calm, focus, and reset their occupants, and in this way the A8 doesn’t disappoint. It is more understated than the Mercedes-Benz S-Class, yet exudes more character than the current BMW 7 Series. When one settles into the A8’s leather-clad seats, with the massage function turned on high and favorite tunes playing, the fog of the mind dissipates, like so many gray clouds in the central Californian sky.

Driving is low-stress in the new Audi A8, with its suite of semiautonomous driving features (although U.S. regulations prevent us from taking full advantage of the A8’s capabilities). Audi has continued to refine electronic safety systems, including its adaptive cruise control and collision mitigation systems. A suite of cameras and sensors, including a new laser system, scans the road ahead and around the car to better detect pedestrians and other traffic. It’s possible to let the A8 practically navigate itself around Monterey County’s sweeping curves with only a light touch on the wheel, while taking in the view of the rugged coastline below. Audi’s superb high-definition display screen with Google Earth makes navigation a breeze, and the A8’s handwriting recognition has improved, along with its smartphone interface.

Currently, the only A8 model available in the U.S. is powered by a 3.0-liter turbocharged V-6 engine, which uses a 48-volt electric, belt-driven alternator starter which functions as the vehicle’s main electrical system and can provide an extra power boost without sacrificing efficiency. Shifts come from an 8-speed tiptronic transmission, and the Quattro all-wheel-drive configuration comes standard. The current engine’s 335 hp and 396 ft lbs of torque are perfectly suited for a leisurely drive along the coast with enough moxie to get around vacationing campers, but we most look forward to the V-8-powered variant, most likely in the form of an S8, which hasn’t officially been confirmed for the U.S. but is expected to arrive this summer in Europe. A plug-in hybrid could also reach stateside shores.

As BMW and Mercedes-Benz have done with their respective flagships, Audi offers the A8 only in the long-wheelbase version for the U.S., which means plenty of legroom and luggage space. In the rear, a floating center console allows passengers to control the car’s functions via touchscreen and some hard buttons.

Buyers will also want to opt for the four-wheel steering and the predictive adaptive suspension, which work together to significantly reduce body roll and the resulting nausea it can cause. North of Big Sur, in the town of Marina, we put some of these systems to the test. In one exercise, we sat in the rear seat while an eager driver wove between a series of cones. With the four-wheel-steering off, we were fighting to hold down our lunch after only a few turns. With the same system turned back on, our stomachs almost settled. In another demonstration, we sat in a parked A8 as a box on a mechanical track sped toward the side of the car. Moments before (a nondamaging) impact, the A8’s chassis lifted itself up on the side of the impending collision, effectively raising the beltline and reducing the chance of injury.

In all, the 2019 Audi A8 makes an elegant choice for a full-size executive sedan. While the current iteration is not the most powerful, forthcoming V-8 and plug-in options will nicely complement the car’s serene interior and refined road manners. So, when the fog lifts and the stars come out, the A8 will be the ideal car in which to enjoy the beauty.