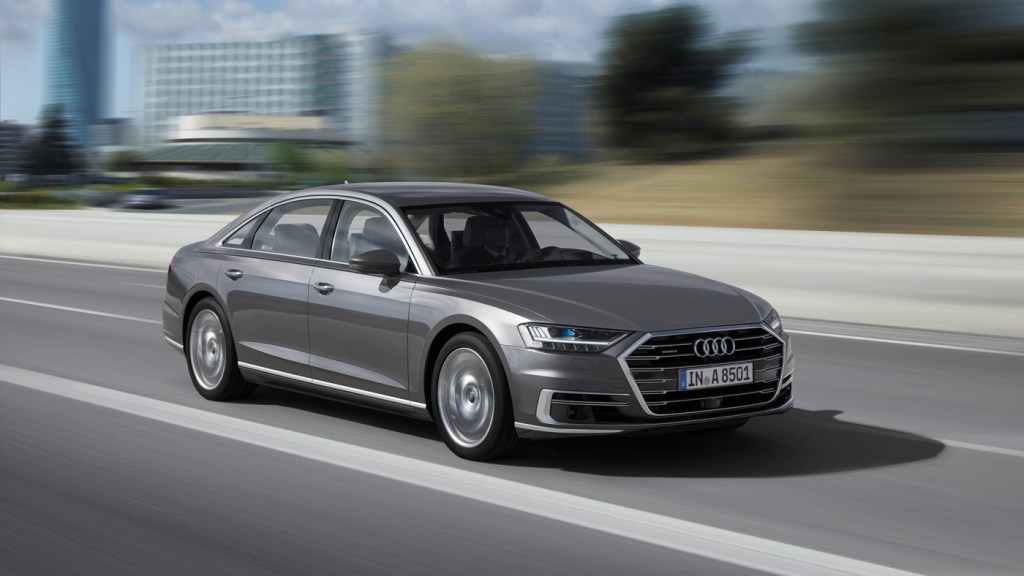 At first glance, the all-new 2019 Audi A8L flagship sedan may not look like an über-cool conveyance of the future, but it’s what lies beneath the car’s conservative skin that sets it apart. An army of sensors (ultrasonic, radar, and laser), several cameras, and enough computing power to dim the lights at NASA combine to create the first series production car to meet Level 3 automation standards from the Society of Automotive Engineers (SAE) International.

Granted, Level 2 cars—like the new Mercedes-Benz S Class—will steer and stop on their own under certain conditions, but driver attention is always required. With Level 3, the car takes full responsibility, freeing the driver to do things like send emails, practice the clarinet, or just take in the scenery. In theory, of course.

Dubbed Audi Intelligence (AI), the A8L’s innovative system comprises three pillars—Traffic Jam Pilot, Parking Pilot, and Remote Garage Pilot. Traffic Jam Pilot (TJP) will function only on a divided roadway and in slow moving traffic (up to 37 mph). But more pertinently, Audi can only ship an A8 with TJP to a jurisdiction where Level 3 is legal. At the moment, that short list includes a few places in Germany and, maybe, Florida—so, both hands on the wheel please. As Audi’s chief engineer of autonomy put it, “A revolution doesn’t happen overnight.”

What we can get is the very clever AI active suspension that reads the road surface ahead and preemptively smooths the ride via instant electric actuators at each wheel, allowing occupants to glide over the road with imperious serenity. Another worthy option is the active rear steering which dramatically improves maneuverability in tight spots while also helping with high speed stability.

The exquisitely detailed interior is hush quiet, and replaces almost all tactile controls for a pair of large haptic touchscreens. An available 3D Bang & Olufsen audio system provides crystalline sound, and soft leather seats provide massage for enhanced comfort. In addition, a long wheelbase version of the A8L (the only version being delivered to the United States) presents rear legroom that could accommodate any NBA great.

Arriving the third quarter of 2018, the new A8L will initially be offered with a 340 hp, single-turbo 3-liter V-6 engine. Soon to follow will be the option of a 460 hp, twin-turbo 4-liter V-8 engine. Both are mated to an 8-speed automatic transmission—power-train combinations that move this lengthy swath of Swabian all-wheel-drive opulence with authority. In addition, look for a 449 hp, V-6 plug-in hybrid in early 2019.