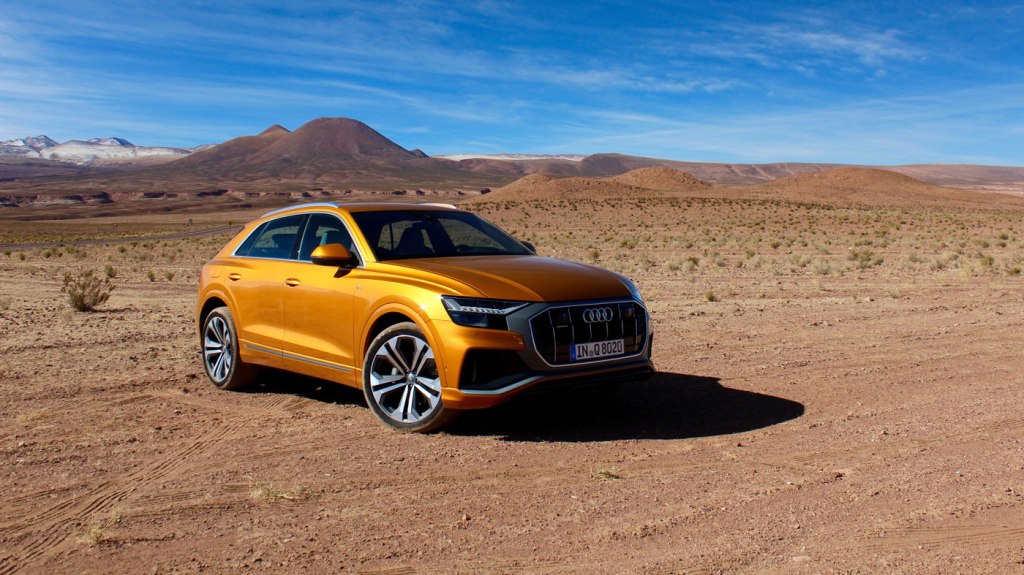 With the 2019 Audi Q8 slated to reach the North American market in late 2018, Audi may be fashionably late to the luxury crossover party, but at least it is bringing its own dash of style.

The five-seat Q8, based on the three-row Q7 crossover, keeps the latter’s wheelbase but is lower, has shorter overhangs, and gets a wider track. In fact, it shares the VW/Audi MSB platform with the new Lamborghini Urus SUV. There’s no turbo V-8 under this hood, though—power comes from Audi’s three-liter TFSI twin-turbo V-6 that twists out 340 hp and 369 ft lbs of torque. It’s hooked to an eight-speed Tiptronic gearbox and a quattro all-wheel-drive configuration (with a default 40/60 front-to-rear torque split) to get power to the ground. And if conditions dictate, the system can send up to 70 percent of the torque to the front wheels or as much as 85 percent to the rear.

The Q8’s chunky, angular C-pillars are a departure from the fastback sweep of the BMW and Mercedes-Benz offerings and get their inspiration from the legendary Audi Sport Quattro rally car from the 1980s, as do the Q8’s fender blisters. At the back, a narrow gloss black element with integrated light bar connects the taillights. The exhaust tips integrated into the rear diffuser are faux—the real outlets are hidden behind.

Wheel sizes range from 19 to 22 inches, and, as would be expected, the examples at the international launch we attended in Chile were generously equipped. The most striking Q8 there was an S Line painted in Dragon Orange and rolling on massive 22s. It actually rivaled the Mars-like terrain for visual wallop.

One of the Q8’s more unique features is the “mask” that surrounds the large octagonal grill. It will be body-colored on base cars, titanium gray on the S Line, and gloss black on the Black Package.

Enough about the style. How does this new flagship Audi SUV drive? Despite the Q8 checking in at a hefty 4,729 pounds, the pressurized V-6 delivers a decent turn of speed, even up in Chile’s dizzying altitudes. The eight-speed automatic transmission is the model of smoothness, and it responds quickly to paddle-shifter inputs. A day of driving had us covering everything from long straights to spaghetti mountain switchbacks, and the Q8 performed as every modern Audi does—with composure, refinement, perceptible aloofness, and an overarching sense of quality.

Helping with efficiency is a mild hybrid system that incorporates 48-volt electronics, a lithium-ion battery, and a belt-driven alternator/starter that will recoup kinetic braking energy and allow for a seamless coasting feature, which has the V-6 engine decoupling and shutting down when conditions allow.

Standard is a steel-sprung suspension with adaptive dampers. We experienced the height-adjustable air suspension that provides a smoother ride, greater dynamic bandwidth, and a ground clearance of 10 inches. The available rear-wheel steering shaves 3.2 feet off the turning circle and gives greater high-speed stability.

Sliding into the new-gen comfort seats, we were presented with Audi’s new dash architecture that seems to brag as much digital real estate as a Boeing Dreamliner cockpit. Front and center is the configurable 12.3-inch Virtual Cockpit with its pin-sharp graphics. The center console houses two screens: The upper 10.1-inch screen deals with infotainment, while the lower, slightly smaller panel controls vehicle functions with haptic/acoustic touch points. It also acts as a writing tablet for inputting navigation info and the like. Scribble in “fast food,” and the Q8 will dutifully bring up a list of the closest artery-clogging establishments with their Yelp ratings—though not in the Andes.

On the technology front, Audi throws everything it’s got at the Q8. An arsenal of sensors (ultrasonic, radar, lidar, and cameras) paint a 360-degree picture for the big brain inside that runs up to 39 driver’s assistance systems.

The Q8’s more upright profile makes for greater usability, as it beats the X6 and GLE Coupe in both rear headroom and cargo space. Ultimately, the Q8 will impress with its comfort, ability, obsessive build quality, and dizzying array of technology.