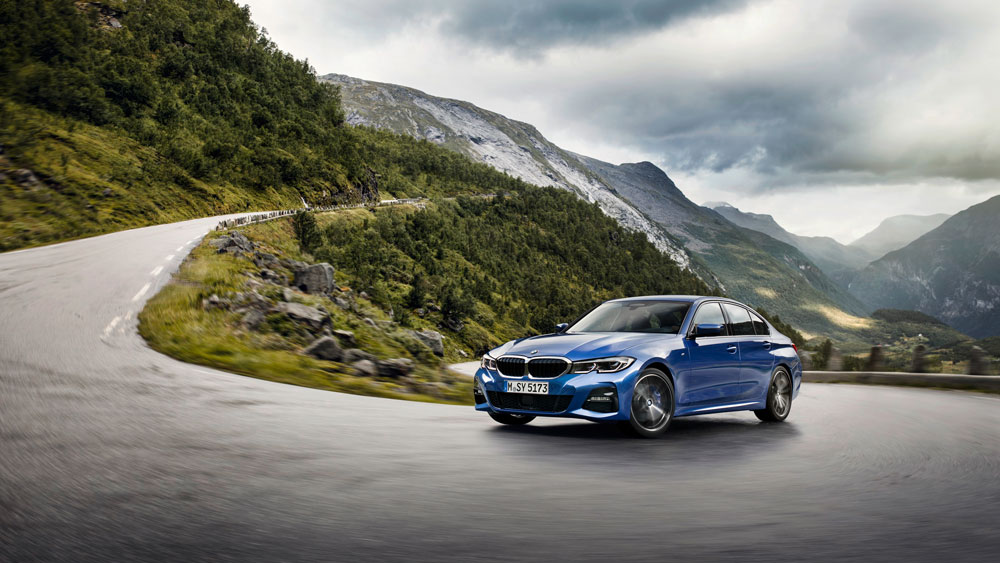 More than 40 years ago, the BMW 3 Series set the standard by which every other compact luxury car is judged. Sporty, precise, and practical, it seemed the sedan (and erstwhile coupe) would rule the roost forever, racking up accolades and garnering more fans with each iteration. More recent generations of the 3 Series, however, struggled to stand out amongst a slew of new competitors, with incremental updates that seemed to whisper instead of shout. Now, BMW has turned up the volume with the 2019 3 Series, boasting a new design, increased efficiency, and a host of technological advancements. But most importantly, BMW’s best-selling car is still all about the driving.

In Portugal’s Algarve region, we put the new 3 Series (internally known as the G20) to the test. Technical improvements are so numerous that BMW locks us in a glass room surrounded by myriad cutouts and models, with a German engineer to explain each. These updates make the new 3 Series lighter, faster, and better behaved. When it goes on sale in the U.S. in March of this year, the new 3 Series will be available as a 330i (starting at $41,245) and an M340i, both available in rear-wheel-drive or xDrive variants.

BMW Group design director Adrian van Hooydonk has said the goal for the new 3 Series was to “put a new face on an established foundation.” The signature kidney grille is recognizable but gets a more three-dimensional treatment. Headlamps, which pay homage to the much-loved e46-generation 3 Series, wrap very far into the wings. Front and rear bumpers are more sculpted and muscular. And the cab is pushed as far rearward as possible, giving the car a more athletic stance.

A daytime drive in the 330i takes us onto the highway and north into the hills, where serpentine roads pass trees charred by fire. Although it’s winter, the weather is mild enough to nudge the car’s limits on streets long abandoned by summer crowds. A new 2.0-liter turbocharged four-cylinder engine makes 255 hp and 295 ft lbs of torque, the latter of which is available as early as 1,500 rpm. The same engine will be used in BMW’s forthcoming 330e plug-in hybrid, slated to arrive in July. It’s powerful enough to cruise briskly and pass anyone in our way. True enjoyment comes in the corners, where the car is delightfully poised. Here we can feel for ourselves what engineers have told us—the chassis is stiffer with a lower center of gravity, while keeping BMW’s famed 50-50 weight distribution. An improved drag coefficient and weight savings of up to 121 pounds help the 3 Series glide through the turns, sometimes with tires chirping, but never out of control.

The new interior design is noticeably simplified. More recent generations of the 3 Series (along with the 2 and the 4) were a veritable whirlwind of geometric shapes, multiple materials, and various tones. Now, the lines of the new 3 Series have been pared down, with fewer layers and less visual clutter. “We have reduced and calmed the surfaces,” BMW interior designer Bruno Amatino tells us. He is particularly proud of the central display screen, which uses curved glass on one side—a technique difficult to achieve in the manufacturing process. While the cabin is improved, BMW’s design still lacks the elegance of competing cars from Mercedes-Benz, Audi, and even Volvo.

Technology advances include improved driver assistance systems, a larger head-up display, and a back-up assistant that can automatically retrace the car’s path in reverse to get out of tight spots. A new digital assistant, similar to Siri and Alexa, controls some vehicle functions such as climate control, navigation, and the audio system via voice recognition. However, we found the system rudimentary and unable to understand us much of the time. Although all such systems have hiccups, the best in-car example so far is Mercedes-Benz’s MBUX, standard on the new A-Class and GLE SUV.

Short of a purebred M3, the fastest 3 Series is the M340i, the latest in BMW’s new-ish lineup that sits between the standard cars and the full-blown M editions (similar to Audi’s S Line or Mercedes-AMG’s 43 series). At the Autodromo do Algarve, a Formula 1–sanctioned track used for testing, we follow professional driving instructors (including former F1 driver Timo Glock) around the circuit’s blind crests and sweeping corners. The 382 hp inline-six easily propels the car to triple-digits on the straights with help from an improved, eight-speed transmission with shortened shift times (BMW cites a zero-to-60 mph time of 4.2 seconds). Variable sport steering is communicative and dialed in, despite my oft-voiced complaint that BMW’s sport steering wheels feel like an overstuffed sausage. Still, it doesn’t negate the joy of feeling the car hunker down after hurtling over a hill or speeding out of a corner, with the help of a revised suspension—which offers up to 50 percent more damping force in the rear—and an M Sport differential that enables maximum speed while keeping things in check. Brakes do their job but require a firm foot; you won’t find a big bite here as with the M3 or a Mercedes-AMG.

It seems BMW has recaptured the magic. Some enthusiasts will still bemoan change, just as they’ve done before—the hydraulic steering systems of yore have been replaced with electric steering; the exhaust sound is piped in through the stereo system; the car will steer itself in traffic. But at its core, the 2019 BMW 3 Series is once again the marque’s ultimate driving machine.