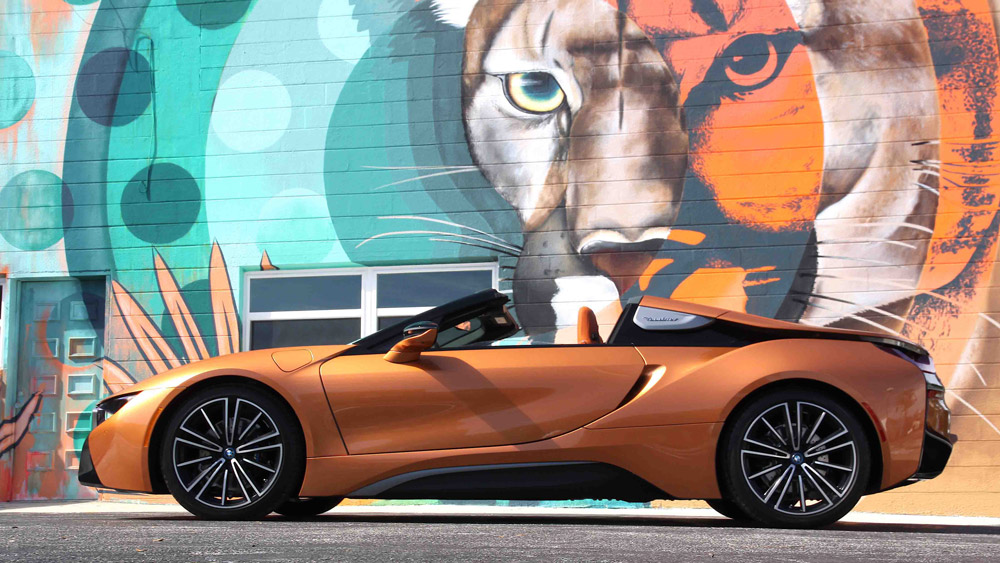 A moonwalking Michael Jackson was never this fluid. Or so tightly choreographed. Toggle a hidden switch on the BMW i8 roadster’s console, and the top silently unlatches, a rear panel opens up, and the three-section canvas roof plunges as vertically as an Acapulco cliff diver into a skinny well behind the seats. From closed to sun-on-your-face, fresh-air-in-your-hair convertible in just 16 seconds.

And this new 2019 i8 roadster makes a terrific open-air tanning machine. Top down, windows up, and with that tiny but effective powered rear wind-blocker raised, you can cruise at triple-digit velocities with hardly any buffeting. Too much sun? Ease down to 31 mph and you can reraise the roof on the go.

The transformation from coupe to roadster has done nothing to diminish the stunning, space-age looks of the original i8. It’s still all wings and curves and Star Wars Millennium Falcon add-ons. Still a futuristic auto show concept you can jump into, power up, and whir away in.

And whir it does. Like the coupe, the roadster has a single, high-torque electric motor up front that drives the front wheels. For 2019, a more powerful lithium-ion battery pack delivers more juice to the motor, raising peak output to 143 hp and 184 ft lbs of torque.

The hybrid can reach 60 mph in 4.4 seconds.  Photo by Howard Walker.

Select electric-only Eco mode, and the battery pack, which is stashed away in the car’s central spine, will give you around 18 miles of zero-emission cruising at speeds up to 75 mph—perfect for scooting around town in eerie Tron-like silence, or stop-starting in commuter traffic.

As before, squeezed under the rear deck is a three-cylinder turbocharged 1.5-liter gas motor from the humble Mini Countryman, generating 228 hp and 236 ft lbs of torque. But combine gas and electric and you get a solid 369 hp and muscular 420 ft lbs of torque.

Of course, in these crazy days of 840 hp Dodge Demons and 300-mile-range Tesla Model 3s, the roadster’s 369 horses and 18-mile electric range sound about as thrilling as an episode of 60 Minutes. But the brilliance of the i8 is that it delivers its still-feisty performance, together with an Al Gore–approved 28 mpg combined economy, and a 69 mpge electric mode rating.

The enticing and ergonomic interior.  Photo by Howard Walker.

Even with a less-than-galloping corral of ponies, the scissor-doored i8 roadster never feels anything less than a joy to drive. Dial up Sport mode and step on the right pedal, and the i8 will zip from a standstill to 60 mph in 4.4 seconds, the electric motor up front and gas engine at the back effectively giving you instant-traction all-wheel drive.

And through nothing less than Potter-like wizardry, the i8 comes with a soundtrack that somehow mimics an all-American V-8. It may be a synthesized faux rumble played loud through the i8’s speakers, but it still sounds like authentic aural muscle.

While the car comes nowhere close to matching the handling agility—and, of course, power—of key rivals like McLaren’s 570S Spider and Audi’s R8 Spyder, it is still a blast to push hard through tight curves and fast sweepers. Not that our arrow-straight route along Florida’s Gulf Coast provides much of a challenge to the i8’s I-beam-rigid carbon-fiber chassis.

A perfect four-wheeler for Florida.  Photo by Howard Walker.

You can’t help being impressed by the precision and weighting of the BMW’s electric-assist steering. Add to this the surprising smoothness and absorbency of the ride, and the roadster does feel slightly more Lexus than Lamborghini.

Compromises? The conversion to roadster sees the loss of the coupe’s cramped-but-usable rear seats. In their place is a full-width storage compartment that can just about swallow a couple of rolling suitcases. At 3.5 cubic feet, the space supplements the i8’s pretty miserable 2.3-cubic-foot trunk.

But that’s a small price to pay for a brilliant open-top convertible that still makes you feel like you’re driving the future. And talking of price, the roadster stickers for $163,300, or $15,800 more than the i8 coupe. As for being the perfect convertible for a sunny Florida winter’s day? Priceless.