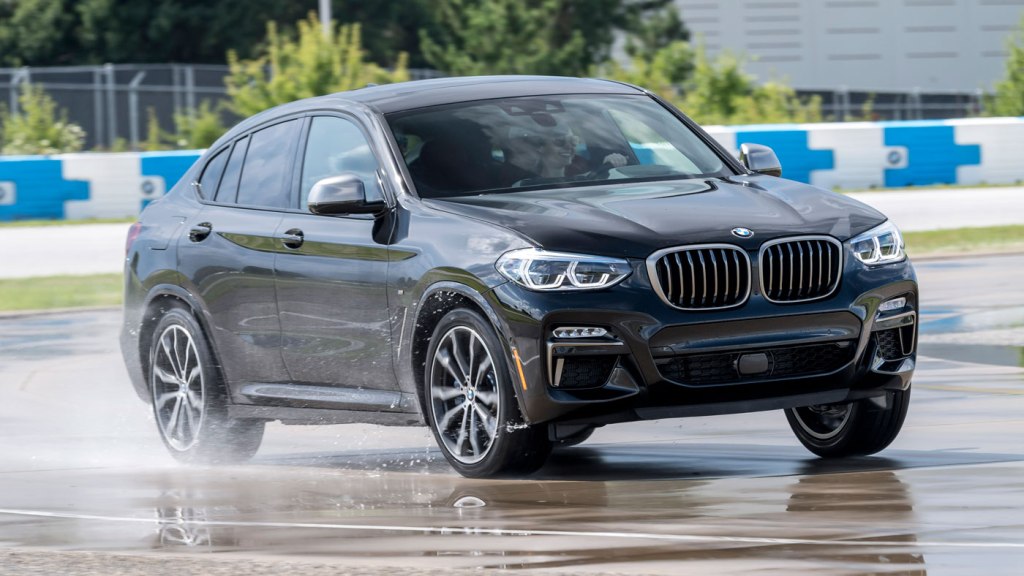 On a sweltering summer day in South Carolina, normal folks make a beeline for shaded, hermetically sealed sanctuaries, sweet tea firmly in hand. Yet here we are, outdoors at BMW’s Performance Center in Spartanburg, careening around corners and working up a sweat in the newest rendition of the X4, the marque’s compact, coupe-like crossover that competes with the Porsche Macan and the Mercedes-Benz GLC Coupe.

The new X4 is not merely a squashed version of the more upright X3. Although it shares the same platform with the latter, the second-generation X4 boasts several differences, both from its sibling and predecessor. The vehicle is longer by three inches (two of which come from a newly stretched wheelbase), and its track is about an inch wider; the latter lends the X4 a more aggressive stance and also adds stability. Subtle exterior design changes, which include cleaner surfaces and straighter character lines, make the coupe more aerodynamic. BMW also infused the new X4 with more performance capability to further differentiate it from its odd-numbered counterpart.

“We had customers telling us to make it more different from the X3,” explained Joachim Dunkel, head of BMW’s X4 program, between bites of melting ice cream. “So this was one of our main goals, but we wanted to go one step further and say, ‘This car must be more sporty, more dynamic, and more athletic.’” Dunkel notes that, in general, X4 buyers are concerned less with cargo space and more about the handling.

And handle it does. On the test track, we followed one of BMW’s Performance Center instructors in the line-topping M40i—the M a reference to BMW’s high-performance division. Right out of the pits, BMW’s three-liter, turbocharged inline-6 engine propels us down the straightaway with 355 hp and 365 ft lbs of torque (that comes on as early as about 1,500 rpm). In Sport-Plus mode, shifts are the quickest and most aggressive, coming from an eight-speed automatic sport transmission. One of the most notable improvements in the X4 is the new variable sport steering system, which is delightfully precise and communicative without feeling overly heavy. The X4 stays planted and stable in the corners thanks to a heavily revised, optional adaptive sport suspension (a fixed sport suspension, with firmer springs and dampers, comes standard).

The pilot’s perspective from the X4’s cockpit.  Photo: Courtesy BMW.

To throw even more variables into the mix, the optional M Sport differential and three levels of stability control take the X4 from poised to driftable, the latter made possible even despite the X4’s all-wheel-drive setup. When pushing the crossover hard, it’s hard to ignore the car’s high center of gravity and fairly hefty weight. But in the words of our instructor, “Not bad for an SUV, right?”

On the road, through verdant forests that sprawl across the border into North Carolina, the X4 was docile in Comfort mode (for those moments stuck behind big rigs) yet spritely enough to get around in short passing zones. In the twistys, Sport mode tightened it up, again showcasing BMW’s fantastic electric steering and responsive suspension.

Not long ago, BMW’s interior design felt cluttered and busy. No more with the X4. The cabin looks cleaner and more integrated, with materials that appear more refined. In the M40i, new sport seats hug and cradle in all the right places and look especially jaunty wearing upgraded Merino leather in red and black. We were grateful for the X4’s air conditioning but found ourselves wishing for the optional ventilated seats. As with all M Sport–branded cars, the M40i gets a sport steering wheel and M badging throughout. The new X4 also gets about an inch more of rear legroom and offers up to 50.5 cubic feet of cargo space with the rear seats folded down.

Along with the X4 M40i, the U.S. will also get the entry-level xDrive30i, powered by a two-liter, twin-turbocharged four-cylinder that makes 248 hp and 258 ft lbs of torque. Both models, along with most of BMW’s X lineup, are made at the Spartanburg plant, which employs more than 10,000 people. Factory tours, along with visits to BMW’s Zentrum Museum, are open to the public, and prospective customers can watch X4s and other models being built. Air conditioning is included, but we can’t promise sweet tea or ice cream.