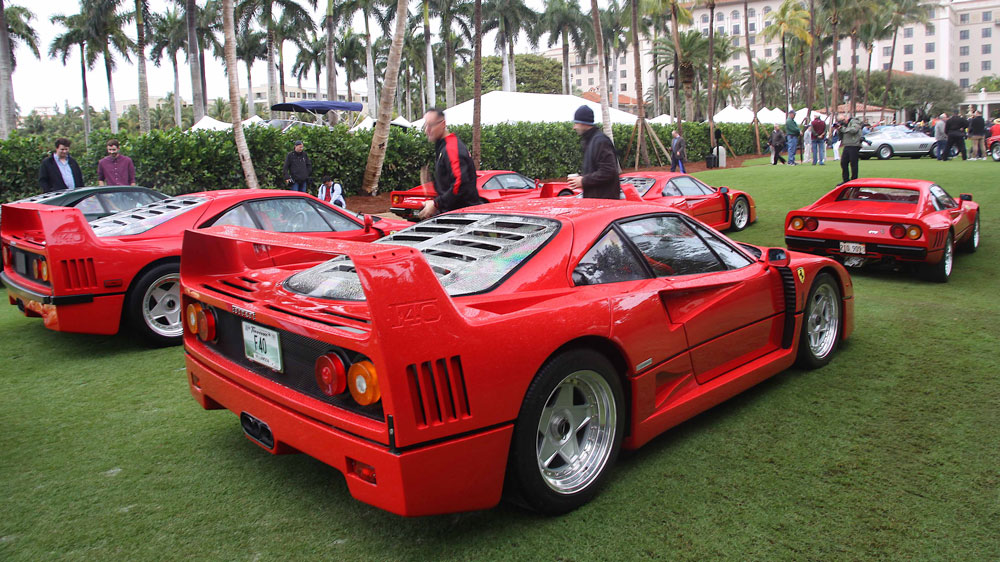 Ferraris competing flat-out in a rain-soaked 1,000-mile Mille Miglia race in Italy back in the 1950s? That’s good. Priceless Ferraris on parade during this year’s rain-sodden Cavallino Classic concorso d’eleganza in ritzy Palm Beach, Florida? Not so good.

Full credit to the owners of some of the world’s rarest, and priciest, Ferraris who braved the unseasonable elements to showcase their pride and joys on the manicured, though rather soggy, lawns of the historic Breakers Palm Beach hotel several weeks ago.

“In the 28 years of the Cavallino Classic, I think we can count on one hand the number of times it has rained during the show,” says Event Director, Crista Miller. “But many of the Ferraris had come from around the world, so a few rain drops weren’t going to stop owners showing their cars.”

This year’s Cavallino was celebrating 60 years of the iconic Ferrari 250 GT SWB Berlinetta. A total of five examples, including the original Paris show car, were on display. Built from 1959 to 1962, the vehicle became the ultimate dual-purpose sports car—a joy to drive on the streets, yet super-competitive on the track. Ralph Lauren has a prized 1960 version in his collection.

The Cavallino Classic, a car collector’s field of dreams.  Photo by Howard Walker.

For Ferraristas, it was worth the $200 entry fee just to see the spectacular lineup of pontoon-bodied 335 Sport racers. Only three examples still exist, and all three were here. And it was one of the trio, the stunning 1958 335 owned by Austrian collector Andreas Mohringer that won the Best in Show award. It will go in his display case next to the top award the car took at last year’s Concorso d’Eleganza Villa d’Este on Italy’s Lake Como.

Proving that not all Ferraris are red, Mohringer’s steely-gray car was joined by a breathtaking burnished-gold 250 GT LWB California Spyder owned by New Hampshire collector Lee Herrington. And there was also a sensational dark blue and white 1958 250 Testa Rossa owned by Chris and Ann Cox. That said, the Hershey’s chocolate-brown 246 GT Dino on the field was definitely an acquired taste.

As for our favorite from the show? That was Tom Price’s magnificent, race-winning 1962 Ferrari 250 GTO Berlinetta, arguably the world’s first supercar. One just like it sold last year for a reported $70 million. Naturally, Price brought the GTO to the Cavallino fitted with rain tires.