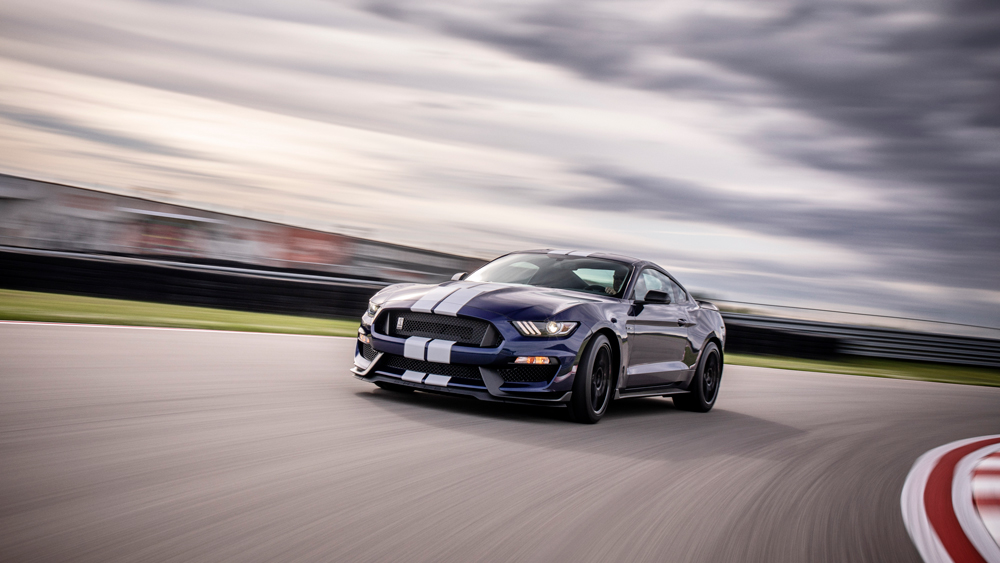 “Let it go,” says the Ford test engineer in the passenger seat, shooing my right hand away from the shifter knob. We’ve just rounded a decreasing-radius hairpin turn at the M1 Concourse in Pontiac, Mich., and now I’m flat-out on the gas into the half-mile straightaway in third gear. I glance down and see the needle passing the 7,000 rpm mark, then 8,000. In the blink of an eye, we’re doing more than 100 mph and listening to the unbridled growl of a throaty exhaust as our Mustang Shelby GT350 hurdles toward a sweeping right-hander. The 526 hp, 5.2-liter V-8 engine features 429 ft lbs of torque and an 8,250 rpm redline, enough to shoot us down the straight without shifting into fourth.

Fifty-five years after the first Ford Mustang rolled off the assembly line, an updated version of the iconic GT350 is burning up the track. The first Shelby GT350 was introduced in 1965 as a high-performance version of the fastback pony car, with a 289-cubic-inch V-8 engine modified with a four-barrel Holley carburetor that made 306 hp and 329 ft lbs of torque. Today, the GT350 (starting at $59,140) is not only faster and more powerful but, for 2019, gets improved aerodynamics and handling.

Using the same wind tunnel where Ford Performance tests Mustang racecars, engineers were able to reduce drag with an optimized front grille and a reshaped rear spoiler, while an optional “Gurney” flap (essentially a tab that stands upright at the trailing edge of the wing, named for its inventor, racer Dan Gurney) adds even more downforce. The 5.2-liter V-8 carries over from the previous year and remains the brand’s most powerful naturally aspirated production engine, set apart by larger intake valves, forged aluminum pistons, and port fuel injectors with dual high-flow fuel pumps. And as before, the GT350 is manual-only, with a Tremec six-speed transmission.

The M1 Concourse is a short but dynamic track, with just enough of the right stuff to test a car’s mettle. Over the blind crest, into a 90-degree left and into a long, double-apex sweeper, the GT350’s revised suspension leads us in an agile dance that shatters old stereotypes of heavy muscle cars barreling around corners sideways. Although the Mustang’s switch to an independent rear suspension—versus the solid axles of yore—is old news for enthusiasts, it can’t be overstated that it remains a key factor in the car’s handling abilities. In the case of the GT350, the integral-link setup uses coil springs and a tubular stabilizer bar with Ford’s MagneRide active damping system as standard. Traction is helped by a new version of Michelin Pilot Sport Cup 2 tires, which uses a tread pattern and compound specific to the GT350.

And then there’s the brakes. Going into each turn, the bite is always hard and quickly on tap, aided by Brembo six-piston calipers in the front and four-pistons in the rear. “I could pound this car all day long and the brakes will never fade,” the test engineer tells me later, after we’ve swapped seats and I’m pinned against the inside of my door as he flicks it around corners with the traction control off. With a pro behind the wheel, it’s easier to appreciate the GT350’s added grip-and-slip.

Two new paint colors make their debut for 2019: the bright metallic Velocity Blue and the darker Ford Performance Blue. All colors can be dressed with optional contrasting racing stripes, as were the original cars of the 1960s. Inside, the cabin remains more functional than elegant, with standard Recaro race seats providing open pass-throughs for safety harnesses. It’s clear that the development money went where it should in this car—namely, the power train and chassis—but small improvements such as standard dual-zone climate control and an 8-inch touch screen help bring the interior up to date. And if the music from the engine isn’t enough, the GT350 also comes with a new optional 12-speaker Bang & Olufsen sound system.

To hone their own track skills, buyers of the 2019 Ford Mustang Shelby GT350 receive a one-day program with professional driving instruction at the Ford Performance Racing School near Salt Lake City, Utah. Just remember to keep your hand off the shifter ‘til redline.