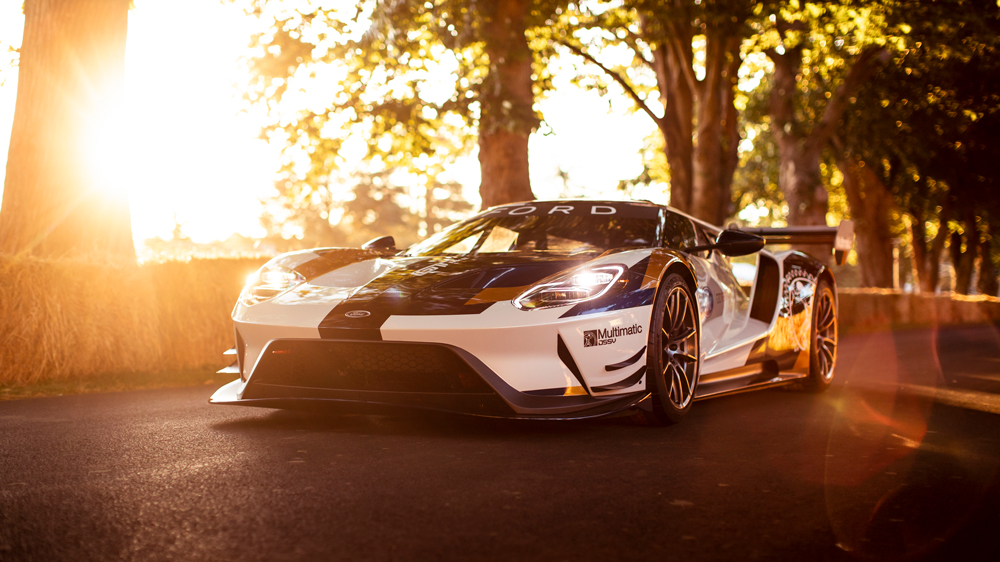 Deep in the south of England lies the Goodwood Estate, 12,000 acres of land in West Sussex presided over by the Duke of Richmond. It is home to two golf courses, a flying school, a racetrack, the headquarters of Rolls Royce Motorcars, and the Goodwood Festival of Speed, a wonderland of the fastest machines over land and in the air. Car lovers from around the world flock to the sprawling grounds every summer to be immersed in racing culture and watch the famous hill climb. Much like Monterey Car Week, the Festival of Speed is also a favorite place for automobile manufacturers to unveil their most impressive new models. Here are a few that caught our eye this year.

This track-only Ford GT, developed in partnership with engineering house Multimatic, wowed at Goodwood by winning Sunday’s prestigious supercar shootout. This extreme version of the latest GT production car will be limited to only 45 examples with a starting price of $1.2 million and takes cues from Ford’s race cars that run the FIA World Endurance Championship—including the 24 Hours of Le Mans.

Its 3.5-liter Ecoboost engine makes 700 hp with shifts coming from a 7-speed dual clutch transmission. A host of aerodynamic mods make for four times the downforce of the standard Ford GT, helped in part by a new front splitter and diffuser, as well as a big rear wing. A roof-mounted intake resembles those used on the Ford’s GT race cars. Carbon-ceramic brakes ensure track-worthy stopping power, and the Michelin Pilot Sport tires wrapped around aluminum 19-inch wheels help the Mk II pull more than 2gs of lateral grip. Cars will be sold to customers directly through Multimatic.

The brand that brought us the Mangusta and Pantera supercars in the 1960s and ’70s has been resurrected in the form of the P72, a flamboyant hypercar with shades of Ferrari and Alfa, but also inspired by the cars of De Tomaso’s past. The opulent interior is bedecked in shiny rose gold with quilted leather stitching—a look reminiscent of Bugatti and boutique carmaker Spyker.

The P72 is built on an all-bespoke carbon fiber chassis, and although the company hasn’t announced any other power-train details, some sources guess power could come from a Ford 5.0-liter V-8, as De Tomaso has a long history with the American carmaker.

Inside the De Tomaso P72.  Photo: Courtesy of De Tomaso.

Of note is the P72’s manual transmission (with an exposed linkage) in lieu of the dual-clutches favored by most of today’s high-end manufacturers. The De Tomaso P72 will be limited to 72 examples and start at about $841,000.

AMG’s most powerful turbocharged four-cylinder engine makes its debut in the swoopy, compact CLA coupe. In its standard configuration, the 2.0-liter engine will make 382 hp and 354 ft lbs of torque that will send the car from zero to 60 mph in four seconds flat (Europeans will have a 416 hp S model that, sadly, will not make it to American shores). Engineers were able to eke out more power with improvements to the turbocharging, fuel injection and exhaust systems.

The new engine is assembled by hand in Affalterbach, Germany, the same as the more expensive biturbo V-8s used on AMG’s line-topping 63 series. Shifts come from an 8-speed dual-clutch transmission with faster shift times over the previous model. An optional aero package adds a modified front splitter and rear spoiler for more downforce. Inside, the CLA 45 gets Mercedes’ newest interface, MBUX, which includes dual widescreen displays and a voice-activated assistant. Deliveries are expected at U.S. dealerships by the end of this year.

This track-only customer race car is a little more than 50 percent of a stock Audi R8 road car, plus custom aerodynamic bodywork, a race-tuned suspension, additional cooling and bigger brakes (with steel rotors) and other upgrades that make this car race-ready.

At just a hair shy of 3,000 pounds, it’s the lightest of the R8 family and will be legal to compete in GT2 racing beginning next season. It uses the same naturally aspirated V-10, tuned for 640 hp, making it the most powerful R8 to date. Since it’s a true racer, that means none of the creature comforts of the road-going R8, such as an audio system and navigation, although it does come with air conditioning. Audi Motorsports executives say they’ll build “as many as are ordered” and that it will be delivered by the end of this year, with prices starting at about $380,000.

Lexus unveiled a prototype of a drop-top companion to its flagship coupe and confirmed that a production version would be available at a later date. The convertible boasts the same long and lean proportions as its hard-top sibling, but Lexus promises it will “project its own, distinct identity.”

In keeping with Lexus’ commitment to racing, Lexus sent the new LC500 convertible prototype up the hill at Goodwood, piloted by pro driver Nick Cassidy. Feedback from the weekend’s runs will be sent to Lexus engineers who will further refine the car before its production debut.