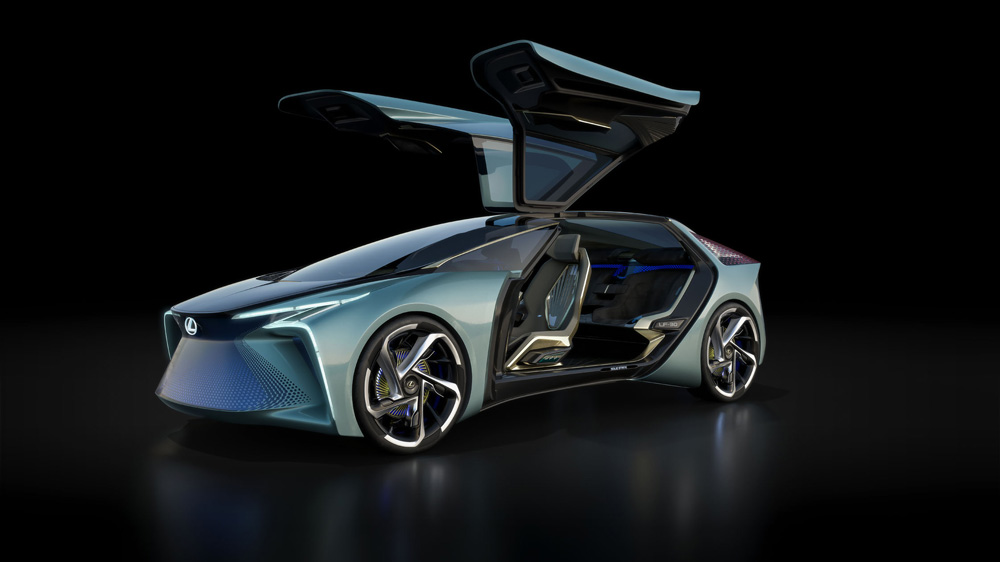 While the world was collectively gasping at the Tesla Cybertruck, there were plenty of other innovative—and even polarizing—designs to be found at this year’s Los Angeles Auto Show. We think the following were some of the edgier cars from the collection.

Inside, there’s a massive tablet a la Tesla with a rotary control knob, a center storage space for a purse or bag, and rear seats with enough headroom for people over six feet tall. Several versions will be available beginning toward the end of next year. The top-of-the-line GT will make 459 hp and 612 ft lbs of torque, and it’s expected to achieve zero to 60 mph in the “mid-three-second-range.”

Called a “standalone sculpture” by Mercedes-Benz designers, the Simplex concept combines the past and present of transportation. “It was fun because it’s something we have not done before,” says Stefann Lamm, head of Mercedes-Benz’s design studio in Carlsbad, Calif. Lamm says the clean, clear product design starts with a basic body shell and passenger compartment that harkens back to the high-performance race car that Daimler Motoren-Gesellschaft debuted at the starting line in Nice, France, in 1901.

Modern elements include the digital front grille—which displays combinations of lights and color—and carbon-fiber control arms. The brilliant blue interior, which Lamm calls “hyper analog,” contrasts with the white body and rose gold accents. Although the car is only a design study, Lamm says the Vision Simplex helps to spark creativity and new ideas. “You can learn from [a concept car]. There are elements you can transform into production, maybe a color scheme or the combination of modern technology and historical parts. It should inspire internally as well as externally.”

This high-performance wagon might not look revolutionary, but in addition to some mean specs, the RS 6 Avant is an achievement in engineering and design. Marc Lichte, Audi’s head of design, tells us that the car’s roofline is the most sharply raked it’s ever been, without sacrificing space. “What I like, in general, is the superfast D- post; it’s a lot faster than the predecessor, but there’s no less volume,” says Lichte.

The RS 6 Avant also boasts 22-inch wheels, something never done before on a car this size. “There’s no other car in the world in this segment that has this,” Lichte beams. Under the hood, a 4.0-liter, twin-turbo V-8 cranks out 600 hp and 590 ft lbs of torque, and it can sprint from zero to 62 mph in just 3.6 seconds.

It isn’t easy to reinvent an icon. Land Rover’s head of design, Gerry McGovern, and team managed to give one of the world’s most famous rugged SUVs a modern new look while maintaining a sense of heritage. “The clean body side contrasts dramatically against the sheer verticality of its front and, particularly, its rear, to create a reassuringly purposeful stance,” says McGovern.

While we first saw the new ute at this year’s Frankfurt show, there’s no doubt these will sell like hotcakes in the US, where SUVs count for more than half of all luxury-vehicle sales. The Defender will be available in both standard (90) and long-wheelbase (110) variants along with various packages and accessories, like the Adventure Pack, which includes rugged wheel arch covers, a rear scuff plate and portable rinse system to clean up after playing in the mud.

After Elon Musk’s not-so-indestructible truck, Lexus’ gutsy concept may be next in line to win this year’s polarizing design. First shown last month at the Tokyo Motor Show, the all-electric car has a fastback wedge profile and uses in-wheel motors, which freed up space for designers to change the car’s proportions. Ian Cartabiano, head of the Lexus design studio in France, where the car was made, tells us he employed the brand’s “spindle” theme—seen in the front grilles of current cars—as the core architecture that flows through the entire body of the car. “The form language, which we called Transitional Contrast, starts fluid at the front corners and transitions to sharp and crystal-like at the rear,” Cartabiano says. “I love the beauty of the sensual forms of the door that become ultra-sharp at the rear corner.”

Cartabiano also points out the front fenders, which appear to grab the hood and create wings, directing airflow and creating the lighting signature. The interior was inspired by the reins of a horse, which connect the driver to the vehicle and the road. All the materials inside are sustainable and animal-free, from the pleating on the doors (woven from recycled fabric) to the natural charred cedar floor.