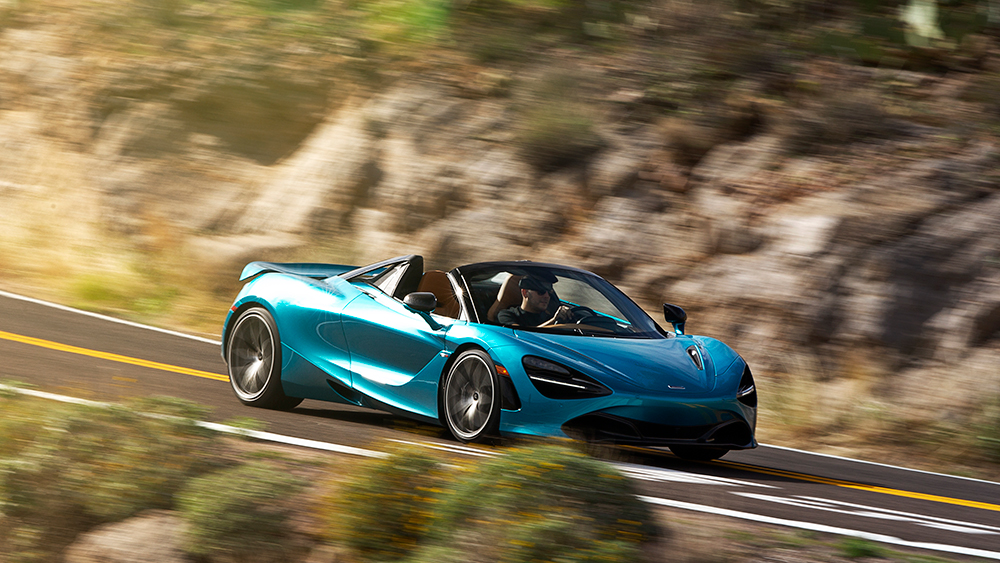 Did you know that it takes 100 years for a Saguaro cactus to begin to grow an arm? Or that it takes a mere 2.8 seconds for a British supercar with 710-horsepower to blur a pack of Saguaro cacti into a solid green streak in the Arizona desert? The former fact is courtesy of the kind folks at McLaren during a press briefing, and the latter comes from sampling the mind-warping launch control on its latest road rocket, the 2019 McLaren 720S Spider.

The orange landscape melted around the drop-top Belize Blue 720S as it eviscerated a quiet back road near Bartlett’s Reservoir, outside Scottsdale, its speedo skipping up in chunks on the ferocious tear to an outrageous triple-digit speed I’m too hesitant to immortalize here. (That’s called “evidence,” right?)

To fire the earth-bound missile, tap the “Launch” button in the center console, stand on the brake, and mat the accelerator. When you’ve steeled your nerves, release the brake and white-knuckle that Alcantara-wrapped wheel with all your might.

Behind you, a 4.0-liter, twin-turbocharged V-8 unleashes its full stable of 710 galloping stallions, while the 568 pound-feet of torque sledgehammers you into the seat, seemingly trying to liquify your internal organs. During a brief stint as a bouncer at a college bar, I was once sucker-punched in the gut by a unruly goliath of a defensive lineman. The McLaren 720S Spider hits far harder.

There’s just the teensiest skitter from the Pirelli P-Zero tires as they scramble to propel the 3,236-pound beast forth. In that split-second, your pupils dilate, which is good because you’ll need full capacity of your senses to control what’s about to happen. When those Trofeo Rs bite, all bets are off.

In (a conservatively estimated) 2.8 seconds, 60 miles an hour briefly blinks on the digital dash, but you’re in it to win it, so you keep the throttle buried as the 720S snarls its way through the revs. Each satisfyingly chunky upshift through the seven-speed gearbox gives you an extra jab rearward, while you hurdle forth at an eye-watering clip. In 7.9 seconds, 124 miles an hour arrives, and in 10.4 seconds you’ve run one blistering quarter-mile.

An ominous county sign flashes by, as you scream around a corner. Did that say “Highway ends”? Sure enough, around a blind bend and just beyond a dip, the asphalt simply ceases, yielding to a rock-hewn trail. Time to drill the carbon-ceramic stoppers. The six-pot aluminum grabbers up front chomp onto the dinner-platter-sized discs, and the prow plummets. It takes just under 400 feet to yank the blue behemoth to a full halt from 124 mph, about four and a half seconds. Plenty of room to spare. The faintest scent of smoldering brakes wafts into the cabin, along with a little plume of dust, and it’s then the realization comes: Good God; I forgot this is a freaking convertible.

Indeed, the McLaren engineers’ greatest feat may be momentarily making you forget you’re in a spider. That’s one helluva trick. Credit that carbon-fiber Monocage II-S monocoque underpinning the 720’s chassis for supreme stiffness and lowering the center of gravity to keep the handling as on-point as it was in the Coupe. Even with all the tweaks needed to accommodate the removal of the roof—which happens in an impressive 11 seconds, at speeds up to 30 miles an hour—only 108 pounds are added. The Super Series Spider mirrors the Coupe’s sprint to 60 (the aforementioned 2.8 seconds) and concedes only 0.1 second in the shuffle to 124.

But aside from the wind buffeting over the cabin—and perhaps blasting directly in your face, depending on how you’ve positioned the rear wind deflector glass—you’d be hard pressed to distinguish any difference, especially in the handling. The same Proactive Chassis Control II offered on the Coupe works marvelously here, too, whether you’re in Comfort, Sport, or Track mode. The ride is comfortable for longer hauls, thanks to multi-adjustable seats, but stiffens up when you’re ready to rail on it. The independent adaptive dampers and dual aluminum wishbones keep the Spider cemented in on whatever line you throw it into on curvaceous sweepers. Understeer creeps in, but only if you’re pushing hard, trying to find that ten-tenth.

The road to Bartlett’s Reservoir is a lead-footed driver’s dream. It’s a long inky ribbon with plenty of fast corners, and off-camber turns, and virtually empty. It’s the optimal playground for the Spider, which will happily gobble the whole stretch high in the rev-range, its sonorous exhaust note bellowing magnificently behind you. The car easily slices through corners at multiples of the demarcated speeds, a parlor trick that will routinely affix a shit-eating grin on your face. With unlimited tarmac, the 720S Spider will continue hit a double-century top speed of 212, with the roof up, and 202 mph with the wind assaulting your face.

Usability is a cornerstone of McLaren’s design DNA that is a constant consideration. In a testament to that facet, the 720S Coupe had remarkable, class-leading, 360-degree visibility, and engineers knew that had to carry over to the Spider. When designing the Rollover Protection Structure (ROPS) to integrate with the Monocage, the rearward flying buttresses were glazed, enabling unparalleled visibility in your blindspots, while also increasing downforce, and allowing the engine to breathe easier. Try reversing out of a Walgreens parking lot in a Lamborghini Aventador Spyder without breaking a sweat. It’s impossible. Not in the Macca.

Gripes are limited to the fact that the powertrain can be a little lurchy in Track for around town driving, and a little laggy in Comfort, if you’re trying to get up and go, but that’s easily solved by just leaving the thing in Sport mode. That said, the 720S Spider’s marvelous all-around attributes do create a solid issue for the lads at Woking, McLaren’s headquarters: how the hell do you top perfection?