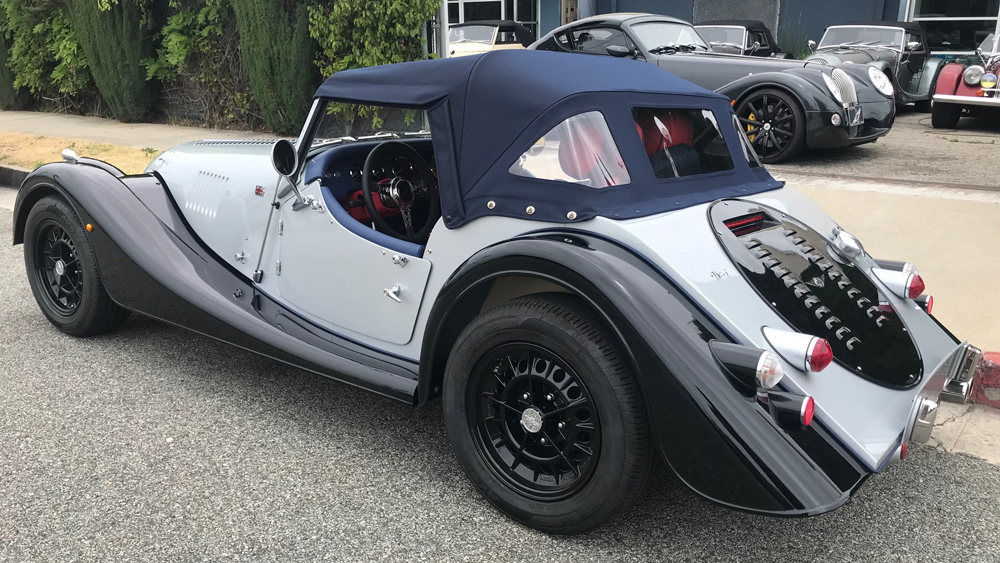 I knew from the instant I climbed behind the wheel of a Morgan that I’d fallen in love. Not many cars in our modern era offer such good looks and unbridled fun. Ensconced in its small but luxurious cockpit of wood, leather and aluminum, the driver becomes one with the car, the Morgan telegraphing every nuance of the road and landscape.

Like the cockroach in its ability to survive the most apocalyptic events, so it goes with the Morgan. As other marques charge headlong into the future, tiny Morgan Motor Company, founded by H.F.S. Morgan in 1910 and based in Worcestershire, England, keeps doing things pretty much the same way it always has. By hand.

The Morgan is a charming reminder that appealing design, proven engineering principles and the virtues of hand craftsmanship are as valid today as when the first four-wheeled Morgan rolled out of its dirt-floored factory in 1936. As with the indefatigable roach, Morgan has likely survived by laying low and letting larger competitors exhaust themselves climbing the vehicular food chain.

The 2019 Morgan Plus 4 available through Morgan West in Santa Monica, Calif.  Photo: Courtesy of Morgan West.

Still, the looming specter of ever-tightening US federal crash and emission standards made 2003 the last year for the classic Morgan Plus 8, powered by the aluminum V-8 used by Buick and Rover for decades. The Roadster, equipped with a Ford V-6 engine, replaced it, although that car last appeared Stateside in 2005 due to those aforementioned regulations.

Under the leather-covered dash is factory air conditioning.  Photo: Courtesy of Morgan West.

In the interim, Morgan has continued to offer its models in Europe and other markets, quietly improving the concept and, in 2019, introducing an entirely new bonded-aluminum platform disguised with the same body shape so beloved by Morgan devotees. Featuring a long bonnet, swooping fenders and low-cut doors, it carries the signature of the classic British sports car. But unless things change on the government level, they’re not coming to America.

What did manage to make their way into the US are a few examples of the final steel-chassis cars, thanks to the assiduous efforts of Dennis Glavis, Morgan’s unofficial American ambassador and owner of Morgan West in Santa Monica, Calif. Morgan West’s 2019 Morgan Plus 4 is the lightest, most nimble and essential modern Morgan, short of the company’s three-wheeler.

The car’s small but luxurious cockpit of wood, leather and aluminum.  Photo: Courtesy of Morgan West.

Carrying a Ford 2.0-liter inline-four engine with a five-speed manual transmission, it’s got plenty of punch, thanks to a power-to-weight ratio that will embarrass most modern cars. Quick acceleration and a roach-like propensity to scatter sideways when provoked are the charms of such a lightweight vehicle. It still employs the sliding-pillar front suspension designed before World War I, though adjustable shocks transform its predecessors’ hair-shirt handling and ride quality for the better.

Followers of Morgan will notice new front and rear valance details, tidy rear lights and the absence of blocky side reflectors, previously mandated by US Department of Transportation standards. Importantly, under the leather-covered dash is factory air conditioning, rendering the Plus 4 a delight to drive when the top goes down and the sun gets serious. At $98,842, this Morgan Plus 4 challenges any sports car we can think of to deliver more fun, usable performance and, unlike that roach, aesthetic appeal and rarity.